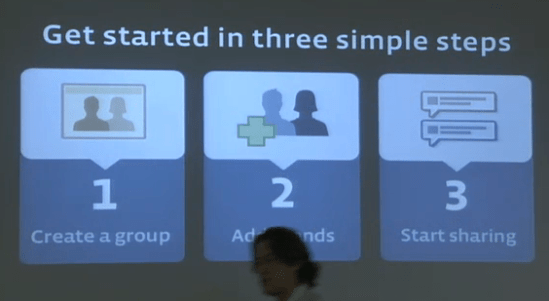 If you tuned into this afternoon’s Facebook announcement hoping to hear wild and surprising things, you were bound to be disappointed. There was no Facebook phone, no triumphant videochat partnership with Skype — even the new, Places-centric design teased by TechCrunch yesterday failed to materialize, though TC claims that “It seems Facebook may not roll out the new design today. It is definitely a part of the “Lockdown” (see below) which Zuckerberg talked about today, but it may not come for a few weeks. More to come…”

The changes that were made were smaller and more subtle, and the announcement (which dragged on longer than it had to) honestly wasn’t ‘important’ in proportion to the attention paid to it. That said, the three changes Facebook announced were all welcome, and seemed earnestly designed with user experience in mind.

First, Facebook has added a feature called “Download Your Information,” which, straightforwardly enough, allows users to download their personal data as uploaded to Facebook. The data consists of a single, easy-to-navigate .zip file. To download this data, you’ll have to first clear the hurdle of the “social CAPTCHA” as a security measure, a form of security for which Facebook filed a patent back in September. Download Your Information will be active as of today.

Privacy-minded Facebook users have long hated the fact that there’s no central place to check the permissions granted to every third-party application that plugs into Facebook. Now, there is.

The big change of the day is a revamped Facebook Groups. Zuckerberg said at the press conference that the site’s new group function was meant to address “the biggest problem in social networking”: Staying connected to all of your friends at once while adapting to the boundaries of each group. While Facebook already has a groups feature, Zuckerberg said that it’s only being used by five percent of users, and is widely perceived as too effort-intensive; he hopes to reach as many as eighty percent with the new Groups, which combines user input with algorithms. Refreshingly, the default setting for groups is closed rather than open access, so users won’t have to deal with the privacy tug-of-war with Facebook with which they’re accustomed from the past. (There’s also a “secret” option.)

The three big features: “shared space,” which consists of a central hub occupied by a group of friends as determined by that group’s members; group chat (finally), and that oldest and most intimate form of online connectivity, the e-mail list.

Facebook users can create new Facebook groups here. (Note that the names are doled out on a first-come, first-serve basis, so there may be the same landgrab for group names that occurred when people got to name their own Facebook pages.)

In a blog post announcing the changes, Zuckerberg writes:

Until now, Facebook has made it easy to share with all of your friends or with everyone, but there hasn’t been a simple way to create and maintain a space for sharing with the small communities of people in your life, like your roommates, classmates, co-workers and family.

Rather than asking all of you to classify how you know all of your friends, or programming machines to guess which sets of people are likely cohorts, we’re offering something that’s as simple as inviting your best friends over for dinner. And we think it will change the way you use Facebook and the web.

From this space, you can quickly post photos, make plans and keep up with ongoing conversations. You can also group chat with members who are online right now. You can even use each group as an email list to quickly share things when you’re not on Facebook. The net effect is your whole experience is organized around spaces of the people you care most about.

It’s not perfect. For one thing, Facebook is keeping its old “Groups” feature even as it adds a new feature called “Groups,” although Zuckerberg says that the two are virtually nothing alike; while they’re doing this out of respect for the 5% of users who actively used groups in the past, this is bound to be confusing for some, although the UI will nudge users towards the new group function. And 80% adoption sounds frankly optimistic for a community for whom many members already have entrenched usage habits. We’ll see how it works out in practice, but taken together, this looks like a low-key, welcome update in total, and is the better for the fact that if you don’t want to use any of these features, you can just ignore them without worrying about more of your data or privacy being sapped away.