Facebook Temporarily Blocked the ACLU For Posting About Censoring Boobs. Because Boobs. 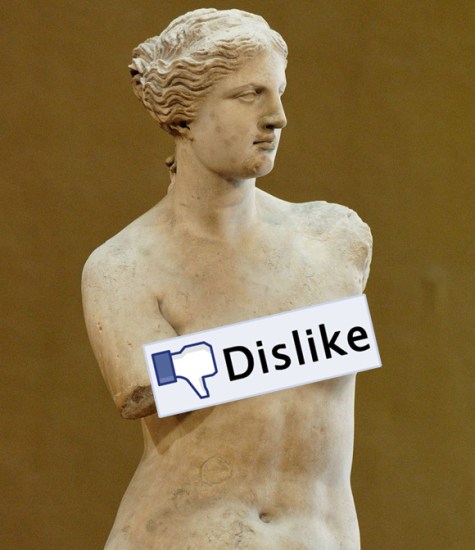 A group wants a statue to be taken down because of boobs. The ACLU writes a response, including a picture of said work of art. They post the response to Facebook, and Facebook takes it down. Because, again, boobs.

Oh no! Boobs! Run for the hills!

“Accept or Reject” is a statue of a bare breasted woman that a group called the American Family Association is trying to get removed from its current home in a Kansas City park on obscenity grounds. The ACLU disagrees, and staff attorney Lee Rowland wrote a piece on the ACLU’s website about how the statue just plain doesn’t doesn’t meet the legal standard for obscenity. He posted a link to the story on the ACLU’s Facebook page, and a picture of the statue showed up in the link preview. And lo, Facebook did see the pair of bronze boobs and swoon, collapsing onto their setees in a fit of offended sensibilities. When they were finally revived with a hefty dose of smelling salts they deleted the link and banned the ACLU from posting for 24 hours.

Facebook told the Daily Dot that the whole thing was just one big mistake. Indeed, while Facebook bans “pornographic content,” “content of personal importance,” including art-related nudity, is OK. You can, in theory, post a picture of the Venus de Milo or Michelangelo’s David and not get banned because of it. Said Facebook’s spokesperson:

“Our team processes hundreds of thousands of reports each week and we occasionally make a mistake. In this case, we mistakenly removed content from the ACLU’s page and worked to rectify the mistake as soon as we were notified.”

Get it together, Facebook. Something is explicitly allowed under your terms of service and it still gets banned? Even if your policy on nudity were 100% perfect—which many, many people would argue it isn’t—that doesn’t mean squat if you don’t enforce it properly. It’s not just an issue with nudity, either. It took three years for Facebook to ban a page the purpose of which was making violent jokes about female marines despite the fact that threatening and harassment is banned on the site (not to mention illegal). As for nudity, Facebook has mistakenly banned elbows that look like boobs and a topless drawing posted by a New York City art school.

Writes Rowland in his follow-up post to the most recent chapter of Facebook’s Boobgate:

“If Facebook is going to play censor, it’s absolutely vital that the company figure out a way to provide a transparent mechanism for handling appeals. That’s particularly true when censorship occurs, as it so frequently does, in response to objections submitted by a third-party. A complaint-driven review procedure creates a very real risk that perfectly acceptable content (like…you know, images of public art) will be triggered for removal based on the vocal objections of a disgruntled minority. A meaningful appeals process is, therefore, beyond due.”

Who know is Facebook is ever going to clean up their act; it took them years to say “Heyyyy, maybe we should do something about all those rape threats!” So I’m not holding my breath. Something tells me we’ll be talking about another Facebook fail not too far down the road.