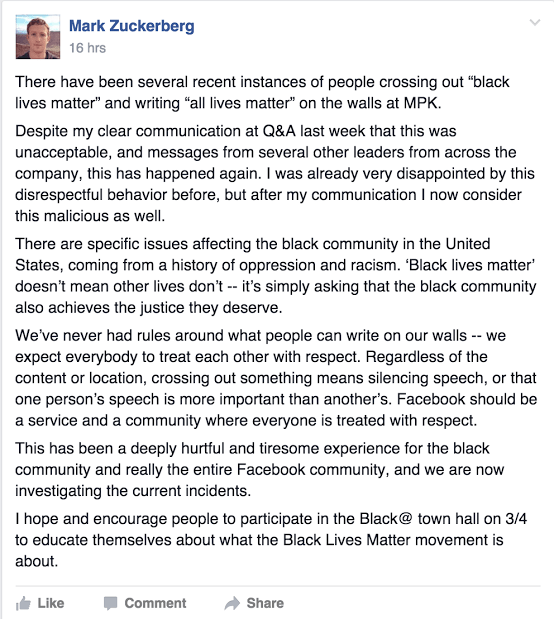 It seems that employees at Facebook are still having a bit of a rough time understanding why “all lives matter” is a bad thing to say. According to an internal memo written by Mark Zuckerberg (obtained by Gizmodo), Facebook’s employees have taken to crossing out “black lives matter” on the company’s famous signature board, choosing instead to replace that phrase with the woefully misguided sentiment of “all lives matter.” Zuckerberg’s memo requests that employees please stop doing that, and explains why that phrase in particular is incredibly racist.

The memo reads, in part:

There have been several recent instances of people crossing out “black lives matter” and writing “all lives matter” on the walls at MPK.

Despite my clear communication at Q&A last week that this was unacceptable, and messages from several other leaders from across the company, this has happened again. I was already very disappointed by the disrespectful behavior before, but after my communication I now consider this malicious as well.

MPK, if you weren’t aware, is the name of part of the Facebook campus. Within it is the famous signature wall, which is a giant whiteboard on which employees and some guests are allowed to write.

Of course, what happens when you give someone relative anonymity and a giant space? As anyone with ignorant friends on their Facebook can tell you: the worst people come out to play.

The thing about this problem at Facebook becomes apparent when you consider the fact that in a lot of ways, Facebook serves as a bit of a hub for the internet. As such, to have such behavior happening under their own roof is incredibly telling of the shit that’s rampant on the internet at large.

As well, they’re very much aware of their disappointing statistics with regards to diversity, and you can be damn sure that they’re doing their best to deal with this problem as quickly as possible. While they’ve had marginal, mild (at best) success in improving their numbers, it’s quite unsurprising that something like this is happening there. What is surprising is the manner in which Zuckerberg is addressing the situation. He seems to be trying to educate as well as enforce.

As a company and a service, Facebook has a long way to go before they can consider themselves a community based on respect and understanding. Understanding, after all, starts at home, and if the people who create the structure for these communities are failing at that, then that taints many things that grow from these structures.