Exclusive: Meet the Shy, Artistic Middle-Schooler We All Were In This First Look at the Cover Art For Invisible Emmie 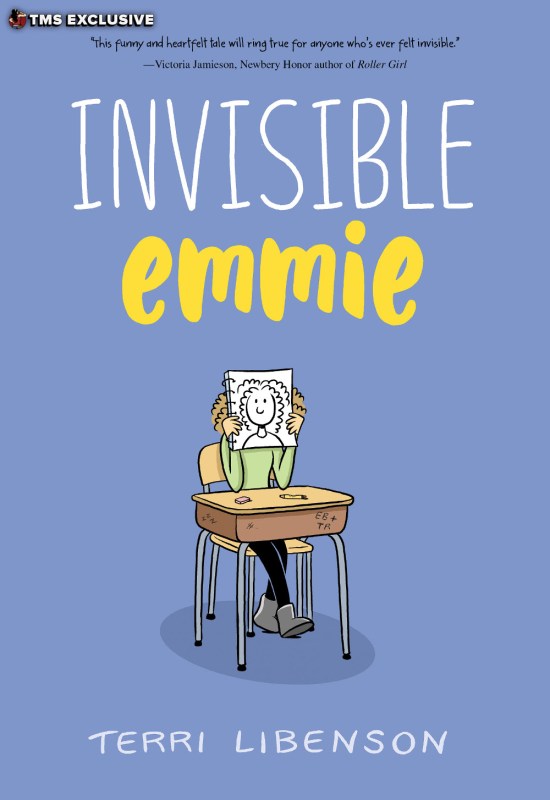 If you’re reading this site, there’s a good chance that you may have been a shy, geeky kid with artsy interests. At least, that was my childhood. If you were, you may relate to the heroine of a new graphic novel from HarperCollins called Invisible Emmie by writer/artist Terri Libenson, a book that reminds us exactly what the wilds of middle school are like.

HarperCollins provided us the exclusive first look at the cover art above. Yup, that’s pretty much how I wished I could walk around all day in middle school. Anyway, enough about me and my childhood angst! Here’s the official info for the book:

This is the story of two totally different middle school girls—quiet, shy, artistic Emmie; popular, outgoing, athletic Katie—and how their lives unexpectedly intersect one day, when an embarrassing note falls into the wrong hands. . . .

All the crushes, humiliations, boredom, and drama of middle school are compressed into one surprising day in this extraordinary debut graphic novel.

Terri Libenson is the Reuben Award-winning cartoonist of the internationally syndicated comic strip, THE PAJAMA DIARIES. She is also an award-winning humorous card writer for American Greetings Corp. Like Emmie in INVISIBLE EMMIE, Terri grew up shy and artistic in Wilkes-Barre, Pennsylvania. She now lives a more outgoing life with her husband and two daughters in Cleveland, Ohio.

If you want to pre-order the book for a child in your life, or so that you can relive your own childhood, CLICK HERE.

Invisible Emmie can be purchased wherever books are sold in May 2017.