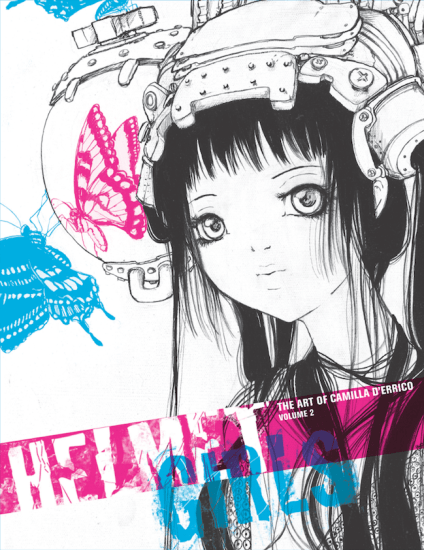 Camilla d’Errico‘s career began at Comic Con 1998, and has continued through companies like Image and Dark Horse Comics, through collaborations and individual work, painting and self-publishing her own graphic novels. But today d’Errico is revealing her new art book with Dark Horse Comics

as a follow-up to her very sucessful Femina & Fauna. Helmetgirls will showcase the art that inspired her upcoming Helmetgirls: Origins series. To d’Errico, the book represents is her “signature work” that defines her as an artist. See exclusive art from the upcoming book and an interview our very own Jill Pantozzi conducted with d’Errico below! 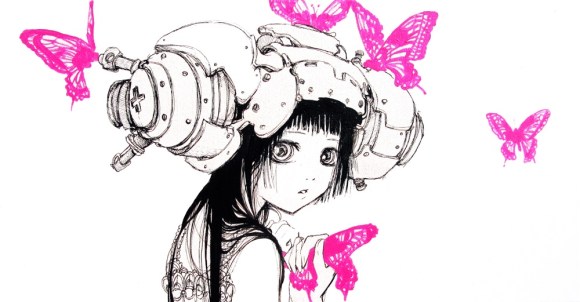 Jill Pantozzi: Did you go to art school? How did you get your start in comics?

Camilla d’Errico: I did a lot of schooling, nothing specifically about comics though. I graduated from Capilano University in Vancouver, and also I did a few years at OUC in Kelowna. My training was in fine arts, animation and illustration and design. I think taking elements from all of those studies helped me develop a sense of storytelling and layout that I couldn’t have learned on my own.

My start in comics came while I was studying. I attended my first ever comic convention in San Deigo 1998, I walked in and felt completely at home. My goal was to show my portfolio to every publisher, so I sat diligently through hours of portfolio revues and with the help of my father we talked to a lot of independent publishers. I got my start with a small company, Committed Comics, that very same convention. From there I worked on a couple of projects for them and then branched out to do work for Arcana, SLG and eventually working with Random House, Dark Horse and Image Comics. 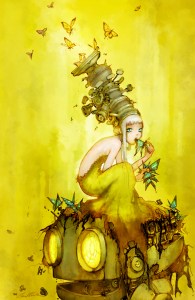 What’s your perspective on women in comics (roles, barriers, etc.)? Do you have any advice for girls or women looking to start a career?

Times are definitely different from when I was wandering around conventions over 10 years ago, there was scarcely any women in comics and even less who were artists, so I had an advantage then. Publishers and editors remembered me without a problem, not hard when you are the only girl in a line-up of men. I felt like a unicorn walking through a forest, all eyes turning to me, such a rare sight at a mainly male populated event!

But rather than feel awkward or shunned, they embraced me, figuratively, lol. It is exciting for the comics industry to have female creators, they are a very accepting industry that in my experience are open and welcoming to all creators regardless of gender.

So, for the ladies out there that want to start a career – go for it. I never let anything stop me from pursuing my goals, let alone being a girl. Although nowadays there are a lot more women in comics, so the competition is definitely tough, its tough not because you are a girl competing with other girls, but because you are competing with everyone who wants to be in the industry. I happened to be there when girls were rarer, but it certainly didn’t give me any upper hand, it just meant that I stood out like an orange among apples. 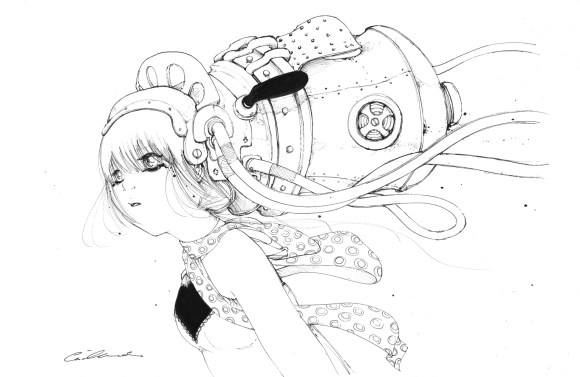 What inspires you? What other creators or comics are you a fan of?

The inspiration question is always so difficult to answer because I can’t really narrow down inspiration, its like labeling dreams and trying to understand where ideas come from. I adore anime and manga, so I know that a lot of what tickles my fancy comes from Asia, be it their literature, their animations, their films and storytelling. I also find a lot of beauty in nature and classic literature. Did I mention I’m a hopeless romantic? I think that has a lot to do with my creativity.

I’m a huge fan, like I said, of Japanese creators. I adore CLAMP, Terada Katsuya, Range Murata, Maki Minami, Masashi Kishimoto and Mizuki Kawashita. Mind you those are only a few of my favs! I also really enjoy the work of Alberto Ponticelli, his book Blatta is incredible! I am not limited to only Asia adoration, I very much love the work of Bobby Chui, Ashley Wood, Barabara Canepa and Ben Templesmith. I can’t list everyone though or this interview would be epic.

Do you utilize digital programs in your work? If so, has it changed or evolved your art in any way?

I use Photoshop to digitally color my cover work and Tanpopo. There are a lot of things I love about Photoshop, CMND Z…love it! But there are things that it lacks, the feeling of pen to paper, the finality of drawing. Real life doesn’t have an infinite amount of fixes, in fact it has none, so for me digital is amazing, but I don’t think it can replace physical drawing or painting for me. I love seeing the works of Red Juice and Jeff Simpson, all digital, its gorgeous, and I certainly could never achieve what they do, so it is art in a way that is revolutionary. My art however I think won’t be affected too much by digital…until I get a Cintiq, then I’m sure that’ll be a game changer!

You previously released an art book with Dark Horse called Femina & Fauna and they’ve also done some fantastic merchandizing of your work. But I hear you’ve got something new they’ll be publishing. Tell us about it?

My second art book! Dark Horse and I are working on an art book that is exclusively the art of Helmetgirls, my signature work. To me Helmetgirls defines me as an artist, and I imagine these girls existing in a world quite unlike ours. I have so much artwork based on these headgear obsessed maidens that we decided to give them their own art book. I hope to one day have a figure based on a Helmetgirl, it would be amazing! 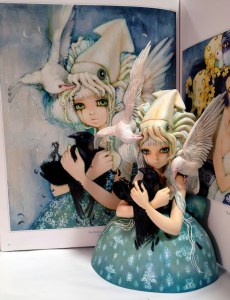 Is there anything else you’re working on that you’d like to tell our readers about?

I am currently working on the second graphic novel of Tanpopo, the first three volumes were self-published, but BOOM! Studios is releasing a hardcover of the series this spring (thanks to a very successful Kickstarter campaign), which will feature new content. I am very excited about the new work, my sister AdaPia and I are scripting the next installments together. Its such a great process to have a wingman on a series like Tanpopo. I can get lost in the literature and carried away by the poetry, so I need someone to ground me, and in this instance take the lead. Each chapter is based on a classic, recently we finished a chapter based on Edgar Allan Poe’s work. It’s very exciting!

I am also excited about the release of my first bust with Dark Horse, based on my painting, “No Ordinary Love.” (Above and left)

And as always I am cooking up some more work that I am forbidden to speak of. So until then unseal my lips, everyone will have to wait to know just what I’ve been up to! But I can say that very soon I will be releasing images of new paintings that I have been doing, very excited about these new paintings.

d’Errico’s Heltmetgirls art book will be over 100 pages of full-color art in hardcover, and is expected to be in store last summer or early fall.