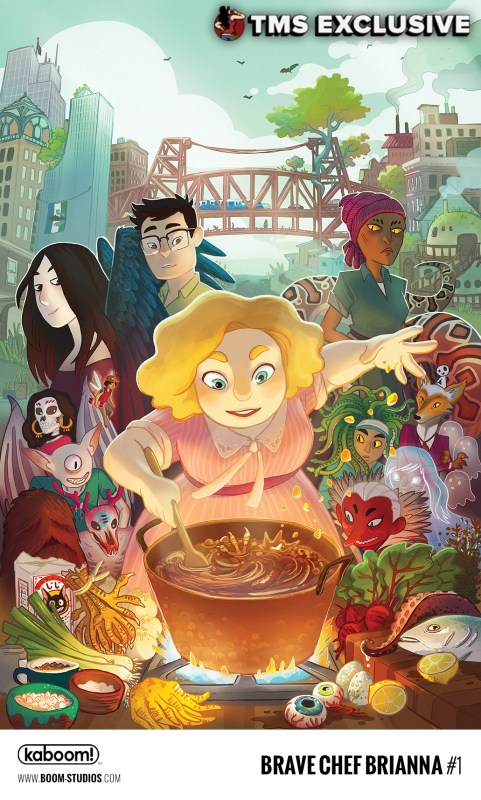 Brave Chef Brianna. Sounds almost like a warrior title, doesn’t it. Well, it actually is referring to a chef named Brianna. Though, she’ll have to deal with monsters, so…maybe she’ll need some warrior skills after all!

In an exclusive announcement to TMS, BOOM! Studios has revealed the latest title from their kid-friendly KaBOOM imprint. Brave Chef Brianna is a four-part limited series by Sam Sykes with art by Selina Espiritu. It tells the story of a female chef named Brianna who comes from a family of chefs and whose biggest dream is to open a restaurant! To do so, she’ll not only have to compete against her 15 brothers (*gasp* Poor Brianna’s Mom!), but she’ll have to do business…in Monster City!

Check out the official solicit information:

Synopsis:
From fantasy author Sam Sykes (Aeons’ Gate) comes a story about budding chef Brianna Jakobsson, who’s trying to impress her father but whose best—and only—customers are monsters.
Brianna has big dreams of starting her own restaurant. When her ailing father, a celebrity restaurant magnate, poses a challenge to his only daughter and 15 sons, she sets out to create the best restaurant around!

Thing is, the only city she can afford to set up shop in is Monster City.

Great for fans of Adventure Time and Steven Universe.

Features a first-ever chalkboard back cover!

Already, Espiritu’s artwork looks super-adorable, and if Sykes is conjuring a Steven Universe vibe? Count me in! Will you be checking out Brave Chef Brianna when it drops in the spring?