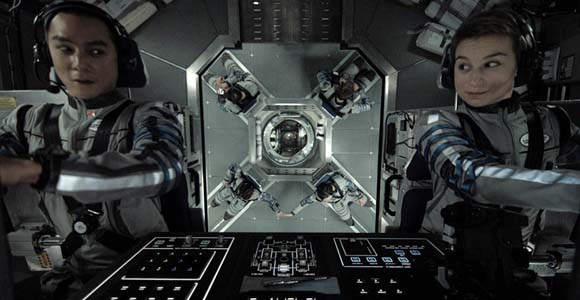 When it comes to alien first contact stories, there’s generally two impulses to follow. Some movies, like Contact, focus on the awe that comes with learning something huge about our mysterious universe. Others, like Alien, focus on the terror that could come from encountering a species unknown to humanity.

There are numerous good examples of each. But I don’t think I’ve ever seen a film that simultaneously embodies both as well as Sebastian Cordero’s Europa Report.

Spoilers below, more the size of unicellular organisms than complex life forms. The mystery of the film is pretty crucial so I’ve tried to reveal as little as possible.

Scientists have long speculated that Jupiter’s moon Europa, which is covered in a thick layer of ice, could harbor life in watery subsurface oceans. Neil deGrasse Tyson says in this talk (a brief clip of which is included in the film) that he “want[s] to go to Europa and go ice fishing.” And in the movie, that’s exactly what a private spaceflight company, Europa Ventures, decides to do.

(It’s worth noting that the mission-to-find-life-on-Europa idea has been explored on film before, in 2010: The Year We Make Contact. I hope you don’t mind me revealing that Europa Report is completely monolith-free.)

Europa Ventures sends six astronauts and their flight on Europa One is depicted in all the recycled-urine-drinking realism that comes with humans being in space a long time. A reason is provided for why a robotic craft wasn’t sent instead, though it’s flimsy. Suffice to say there’d be no film without this conceit. And their quest, operating in conditions that technologically speaking don’t appear drastically different from that in the real world, ends up feeling quite inspirational.

And here’s where the brilliance of Europa Report shines through. While it works as a celebration of humanity and its thirst for knowledge, it’s also about just how insignificant we are compared to the majesty of the cosmos. And while this duality isn’t necessarily new, Europa Report manages to make it not just astonishing, but horrifying.

Because make no mistake: This is basically a very intelligent horror movie. This is a “found footage” film, but it isn’t The Europa Witch Project. It does something with its docu-style footage that is very out of the ordinary.

There are cameras mounted everywhere in Europa One’s confines, which are supposed to allow people on Earth to follow along with the mission’s progress. But six months into the four-year-long mission, something goes wrong which prevents anyone on Earth knowing what’s happening from there on out. The ominous scenario the incident creates is known to the audience from the start of the film but you have to wait until halfway through before knowing what the incident actually is.

While the docu-style footage gives Europa Report the veneer of a (fictional) straightforward account of what happened, it’s nothing of the sort. You presume in most found footage films that you’re supposed to be watching a documentary that has been edited for brevity and emotional impact, but Europa Report goes a step further. The film actually includes all kinds of advanced filmic techniques. It’s chronologically out of order, there’s extensive use of split-screen shots (that sometimes include brief, foreboding images of characters screaming, for example), there’s misdirection regarding whether certain characters are alive or dead, etc. None of this makes any sense if you interpret Europa Report as a simple “report” as the title implies.

At the expense of making it a much more interestingly structured film, the illusion of it being a fictional documentary is shattered. I didn’t find that much of a loss – I think the benefit of approaching a now-tired format in a fresh way was well worth it. Also, most documentary-emulating films don’t have such a conspicuous, or for that matter, superb, original score. This one is by Bear McCreary, who is also responsible for the music in Battlestar Galactica.

Europa One’s crew is a joint American/Chinese/European/Russian outfit including some actors recognizable to fans of various genre franchises, like Sharlto Copley (from District 9 and Elysium), Michael Nyquist (who played Mikael Blomqvist in the Swedish Millenium trilogy) and Karolina Wydra (currently recurring on True Blood). All six do an admirable job of seeming like the kind of people who would actually be on this kind of mission. The screenwriter, Philip Gelatt, efficiently sketched the roles in ways that add an extra layer of believability. For most of the film, their actions constitute the sort of “competence porn” that Charlie Jane Anders recently pointed out used to be very common in sci-fi but has become rarer and rarer.

For instance, Wydra’s character isn’t just the science officer – she explains her background is in marine biology and oceanography, which would probably make her as prepared as anyone to figure out just what the heck is happening in the Europan oceans when they get there. But of course, it quickly becomes apparent that no human is really prepared for what they find.

Europa Report compares very favorably to the small crop of low-budget space films we’ve seen in recent years. Though I liked Moon and Sunshine, I think Europa Report is superior to both. Which is why I hope it’s able to get more exposure than it has thus far.

It was first released to theaters on August 2, but as of now, Europa Report is only scheduled to make it to 19 American theaters by the end of September. However, you can rent it on iTunes, YouTube and various on demand services. Which doesn’t seem like nearly enough of a rollout for what I thought was one of the best sci-fi films to come along in a long while. As I watched it, I kept thinking about the Arthur C. Clarke quote about how either we’re alone in the universe or we’re not, and both possibilities are terrifying. I don’t think I’ve ever seen a film that expresses that perspective quite like Europa Report does.

Dan Wohl blogs about baseball for a living, and he also would like to start a Kickstarter to get a Europa Report sequel taking place on Saturn’s moon of Titan made. He would love for you to follow him on Twitter: @Dan_Wohl.