As you may already know, October is National Breast Cancer Awareness Month. Lots of different companies and organizations have projects to raise money for various charities but a recent move by Etsy has raised some eyebrows. They sent out an email with the phrase “Show your love to the women in your life with Breast Cancer Awareness Month” but a blogger realized very few of the items listed actually supported a breast cancer charity.

The blog Pink Goose, run by a woman who had been diagnosed with breast cancer, brought the email to light. The image below shows the main content of the message but you can see the entire thing here. Out of the 24 items featured, only eight had any mention of using the sales to support a charity but even that wasn’t entirely clear. 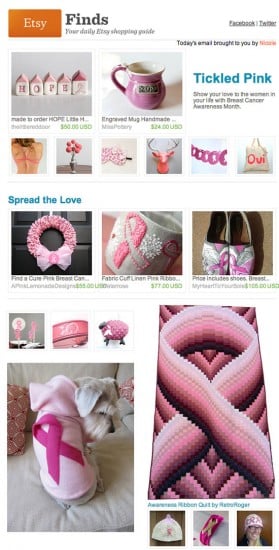 This isn’t the first time the blogger has had an issue with Etsy over “pinkwashing,” when corporations sell products claiming to fund breast cancer prevention but never follow through. About this instance she writes, “For example, the seller of the little ceramic houses donates the entire sale price to the Canadian Cancer Foundation (Yay!) while the pink mug for “mom” is suggested as a good gift for breast cancer awareness month (no donation.)” And continues, “After all these objects, the remainder of email just shows pink shit that you can buy that has no connection to BCAM. Pink clothing, different shades of pink, pink decorator objects and the like.”

So is Etsy at fault, the sellers, or both? Another blogger, Jane Flanagan of Ill Seen, Ill Said, jumped in and wrote her own post on the happenings. “I’m so angry at Etsy’s glibness and lack of sincere compassion, at their sellers’ disingenuousness (though, of course, I don’t blame the sellers who just happened to have pink products but make no ‘pink cause’ connection who were included in the e-mail) and also at Etsy’s own lack of participation in making any kind of contribution of pink causes, while they merrily use cancer to market their site and sellers,” she said.

We really appreciate the feedback and thoughtful discussion regarding the Etsy Finds email around Breast Cancer Awareness Month. Our aim in the email was to acknowledge this national campaign of awareness. While we do not promote specific shop charities, nor did we make claims to do so in the email, we do support acts of generosity and compassion within the Etsy community. The email was meant for awareness, and created in a supportive spirit. We will take all of this into serious consideration as we map out improvements to our emails and how we promote awareness within our community in the future.