"Make no mistake, we're here on this stage to present an image for the world to see. A portrait of survival." 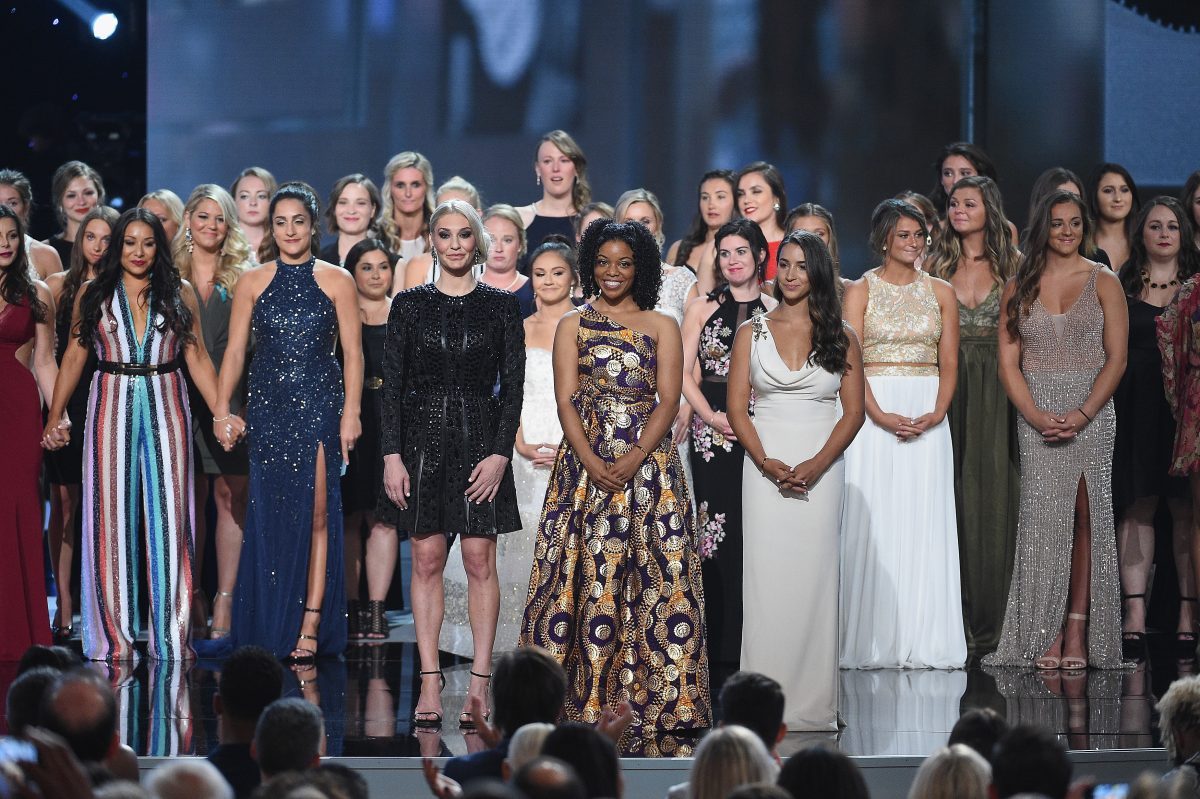 Last night at the ESPY Awards, 141 survivors of USA Gymnastics team doctor Larry Nassar’s sexual assault took the stage to receive the Arthur Ashe Courage Award. The audience gave the women a standing ovation, as they filled the stage at the Microsoft Theater in Los Angeles. Jennifer Garner presented the women with the award, as Sarah Klein, Aly Raisman, and Tiffany Thomas Lopez accepted the award on behalf of the survivors.

Sarah Klein, Nassar’s first known victim, spoke to the audience, saying “Make no mistake, we’re here on this stage to present an image for the world to see. A portrait of survival.” She continued, “As a mother, I am here to say that we must start caring about children’s safety more than we care about adults’ reputations,” she added. “And as a survivor, I’m here to say that if we just give one person the courage to use their voice, this is worth it.”

Olympic gold medalist Aly Raisman followed Klein to describe the effects of not only Nassar’s abuse, but of USA Gymnastics repeated brushing off of the gymnasts’ pleas for help. “The ripple effect of our actions, or inactions, can be enormous, spanning generations. Perhaps the greatest tragedy of this nightmare is that it could have been avoided,” Raisman said. “Whether you act or do nothing, you are shaping the world that we live in. Impacting others. All we needed was one adult to have the integrity stand between us and Larry Nassar. If just one adult had listened, believed and acted, the people standing before you on this stage would have never have met him.”

Raisman is suing the United States Olympic Committee and USA Gymnastics, alleging that both organizations knew about Nasser’s molestation and did nothing to prevent it or take it seriously. After several days of horrific testimony on abuse that spanned over two decades, Nassar was sentenced 40 to 175 years in Michigan, a life sentence for the countless abuses he committed.

Thomas Lopez spoke as well, saying “There are a lot of conversations in our society that we tiptoe around as if they’re something to avoid. Sexual abuse claims victims come in every race, showing no discrimination.” She continued, saying “the amount of loss is almost immeasurable. Tonight, we stand here, and it feels like we’re finally winning.”