If you’re of a certain age (*ahem* my age), there’s a good chance that when you were in elementary school, they didn’t let you outside for recess when it was raining or snowing, and instead you sat inside and watched movies. There’s also a decent chance that one of the movies you watched over and over again was a donated VHS tape of The Little Giants, featuring Becky “Icebox” O’Shea, a girl whose own uncle wouldn’t pick her for the pee-wee football team no matter how kickass she was… because she was a girl. The movie’s got a lot of stuff going on, but Becky’s plot arc is one where she struggles with being the only child of a single parent, a teen with her first crush, a tomboy who feels pressured to conform to femininity so that boys won’t overlook her as a romantic prospect, and so good at football that she scares the pants off her teammates. In other words, she was awesome.

Erin DiMeglio, though, is another level of awesome, as a high school student who may be the state of Florida’s first female quarterback to play in a regular season high school football game. 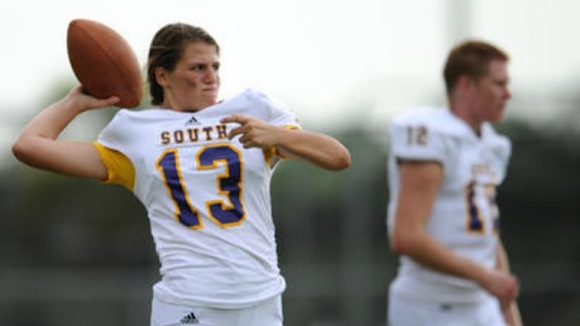 The top picture, obviously, is Icebox. I didn’t want anyone to get confused.

DiMeglio joined her high school team the Paladins in an off-season game last weekend, playing in the last ten minutes of the game, calling plays and completing two passes. “We’ve had girls in South Florida that had the ability to [play quarterback], but they never have,” said veteran Florida high school football analyst Larry Blustein. “You have to give her credit. I’ve never seen anything like this before.” She’s been practicing with the team all summer, under the encouragement of her flag-football coach Doug Gatewood, who is also the coach of the Paladins. Thirty-six girls played Florida high school football last year, and five hundred and twenty three have played since 1973, but s far as anyone can remember, when the new season starts DiMeglio will be the first to be a quarterback. Memory is key here, as while Florida football records keep track of athletes who play, they don’t keep track of positions.

For DiMeglio, however, it’s not just about football, it’s about basketball too. She wants to impress college scouts.

“I think schools will see that I can play all sports,” said the 5-foot-6, 160-pound senior, whose primary sport is basketball. “Maybe being different will help. They’ll remember me as the girl that plays football.”

Erin’s team, coach, and school officials are all supportive. “I had a girl try out at wide receiver that couldn’t make it through practice and I had a kicker that really couldn’t make a field goal, so I didn’t keep them,” says her coach. “Erin can actually do what we ask of her…she completes the passes I ask, she knows the plays. … Anything I ask her to do, she does.”

Her parents, worried about injuries, took some convincing, but Gatewood reassured them that he’d do everything possible to keep her from getting injured. It probably helps that DiMeglio has already been pretty physical on the basketball court, sustaining a broken nose, a broken finger, and concussions. I may only know what I know about football from eight years of marching band, but DiMeglio is definitely somebody I’d love to play pep band for.