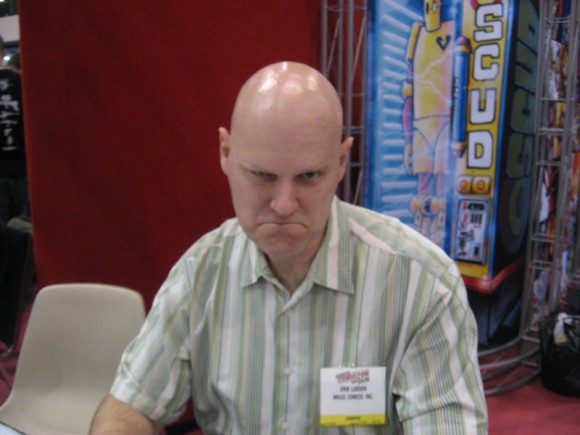 Erik Larson, creator of Savage Dragon, founder of Image and successful print comic artist took to twitter earlier this week and tore down the edifice of webcomics, revealing them as the artistically stunted collection of stick-figure dick-and-fart-jokes that they all truly are.

Just kidding, he talked some trash about the ease of webcomics publishing as it relates to the relative quality of webcomics as a whole that kind of make him look like an elitist jerk. (No slight to the actual Elitist Jerks. They do good work so the rest of us plebes don’t have to.) For example:

Every crappy submission can “see print” on the web–every reprint book that would sell three copies in print would work on the web. The web is the great equalizer. Every crappy thing can get tossed up there. If it all went digital nothing separates a pro from an amateur. Print is far more discriminating. There are fixed costs which can’t be ignored for long. It’s not the wild west like the Internet is. That’s why the web doesn’t excite me a whole lot. Every nitwit can put stickmen telling fart jokes up–there’s nothing special about it.

When questioned with “But one guys stickmen telling fart jokes is another guys Watchmen,” he answered:

Stickmen telling fart jokes is Watchmen as far as the internet is concerned, @BizzaroHendrix.

I don’t think it’s unfair to say that the best online work is on par with good pro comics but the worst is far worse. I don’t think there is a web only comic that’s as good as Watchmen or Dark Knight. Correct me if I’m wrong. There are certainly web comics that are good for a laugh–and better than what’s in the Sunday Funnies–but not at a Watchmen level–yet.

I’m glad you mentioned the Sunday Funnies, Mr. Larson, because I don’t see you complaining about them not having a Watchmen or The Dark Knight. Or is that because they’re a hobbled section of the medium dominated by ghostwritten strips, where new talent finding a purchase is one in a million because of the finite space of the comics page and the severe reader backlash whenever some one asks if maybe we could take down The Wizard of Id and replace it with something that knows the difference between iTunes and MySpace.

It’s true that we’re unlikely to see a Watchmen from the webcomics space, but its not because it lacks talent. It’s because the internet is a fast paced place. A comic is unlikely to get wide appeal if it updates irregularly or infrequently, and it’s likely to be difficult to read as it comes out if each page is not a discrete unit of storytelling. This makes a graphic novel, which is both a considerable commitment to writing and a long form story broken up into units of chapters rather than pages, difficult to produce in a way that will get popular. Warren Ellis and Paul Duffield’s FreakAngels is the only free webcomic I can think of that is intended to be read in graphic novel form and regularly updates in chunks of more than a page or so. And while Ellis and Duffield are professional comics artists, and FreakAngels is successful, is not their (Correction: it is not Ellis’) day job.

However, lets look at another example. Rich Burlew’s Order of the Stick is his day job, though it updates infrequently due to his health, in one story unit per page. He has used the success of the strip to write two successful supplemental graphic novels that are completely long form, with chapter units.

I mean–there’s things on the internet that people are willing to read but they would never pay for–and those are the success stories.

I’m glad you mention the success stories, too, like Order of the Stick, Penny Arcade, PvP, Shortpacked, xkcd, Starslip Crisis and a few others whose creators have managed to quit their day jobs to make a full time living off of their webcomic. Here’s the thing about those success stories: they are success stories because their fans pay their creators. And not out of charity. People pay them for products other than the daily strip. They pay for compilations of the web strips that contain creator commentary, for books that fill in the back story of the tale that is ongoing in the strip, they pay for t-shirts, for prints, posters, statues, and all kinds of other merchandise. Merchandising is a strategy used by the DC, Marvel, Dark Horse and pretty much every other big comic house.

Are you worried about the idea of having to be a business person as well as a creator in order to succeed? I am. But I’m willing to trade that for independence from the ridiculous creative conservatism of the Big Two, just like you did when you co-founded Image comics.

I don’t have to have claw my way up a system that I’ll ultimately leave in frustration in order to create an environment where I’ll be able to publish comics in the way that I want to publish them. I can just publish on the internet. If I do good work, and I’m not too unlucky, and if I build my work into a good business just like you did with Image, I’ll be able to make a living at it. And if all I produce is stickmen telling fart-jokes… I probably won’t. That’s the filter on the internet.