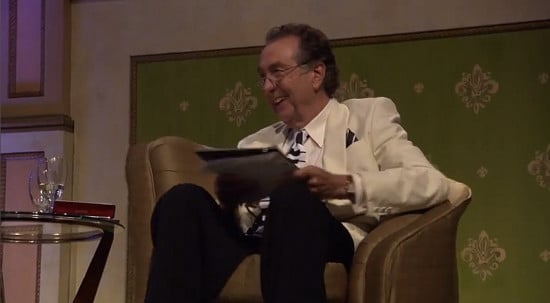 Eric Idle has declared it “Dick Day,” and so “Dick Day” it must be. The Monty Python alum has been working with a group of British comedy legends and also Russell Brand on a project called What About Dick? which is being released online today for the low, low price of six dollars. Why not five dollars, which seems to have become the standard price for purchasing funny things online? We assume it has something to do with the exchange rate from American dollars into British currency. Then again, maybe it’s just twenty percent funnier than anything else on the Internet.

Releasing comedy specials online is nothing new. Louis C.K. just announced he’ll keep doing it, but What About Dick? is a different kind of creature — sort of a play/comedy hybrid. The show incoroporates songs, elements of stand up comedy, and seems a lot like a play, but Idle insists “it’s not a play that you have to take completely seriously because it’s sort of a send up.” We are not well-versed in the Queen’s English, but assume “send up” is a British phrase meaning “crazy awesome comedy with Eric Idle.”

Whatever it is, with a cast that also includes Eddie Izzard, Tim Curry, Billy Connolly and Tracey Ullman, we’re pretty sure it’s worth the six bucks, or pounds or Euros or whatever.

You can also hear Eric Idle, Billy Connolly, Eddie Izzard and Sophie Winkleman talking about the play on the latest episode of The Nerdist Podcast.

(via What About Dick?)