Episode 36 of The Geekosystem Podcast “Giftosystem” 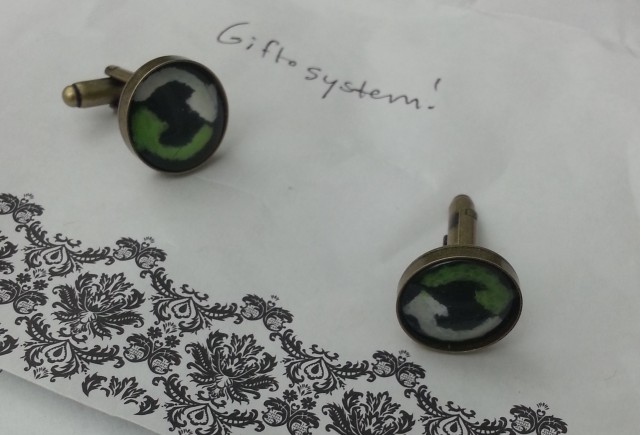 The gang’s all here now that Dan is back from vacation, and Victoria brought geekogifts for the team! We talk about settling in to the new site, the dangers of giant stone vaginas, and as always give you our weekly Editors’ Picks.

You can listen to the new episode right here or by subscribing in iTunes.

Victoria has been taking advantage of the Steam Summer Sale for her pick this week.

My pick this week is The Stanley Parable, which I picked up for something like $6 during the Steam Summer Sale over the weekend (right now it’s going for $10, but if you wait until the last day of the sale, the price might drop again). This is officially the weirdest game I have ever played, and in the best way possible. I go very briefly into the ways it breaks down narrative convention and deconstructs typical game tropes when I explain it on the podcast, but I don’t want to get much more into it than that because part of the fun is having no idea what’s happening. Oh, also, the narrator is a delight. He sounds like the guy who narrated the Hitchhiker’s Guide to the Galaxy radio show. If you’re a big fan of linear, story-driven games, play this absolutely right now.

Dan’s fresh off a week’s vacation and he’s excited to get back to spiting me.

This week, I pick Robin Hood: Men in Tights to spite Glen and his distaste for it. Yes, anyone who has gone through childhood has seen it already, but it’s summer and all of TV ending has left a giant hole in your viewing schedule, so you might as well give it a rewatch. What else are you doing? Going outside or something? Also, as far as rewatching Mel Brooks movies, it holds up much better than Spaceballs, which even Glen can agree with.

My pick this week is Broadcast News. Specifically, this moment:

Broadcast News takes a look at the television news medium of the early ’80s. It was a transition period that was seeing things go in a very different direction than they had after the seriousness of the Vietnam War. Not everyone was happy about it.

Holly Hunter plays Jane Craig, a television news producer working to keep some dignity in the media, but the rest of her industry seems more than happy to give it up for better ratings. Her character in the film is in a constant state of frustration that the world around her just won’t listen to what she’s saying.

There are a lot of smart characters in culture, Sherlock, Dr. Greg House (who’s essentially Sherlock anyway), Tony Stark. They make being smart and thinking you’re smarter than everyone around you seem cool and fun. They glorify it. Hunter’s character in Broadcast News does the opposite. Her intelligence and understanding of the world aren’t some gift she wields. They’re a burden.

Watch that clip again, but try to imagine how Tony Stark would respond. He’d have something glib to say. He’d crack a joke. Sherlock wouldn’t be able to resist a demonstration that he is absolutely the smartest person in that or any other room. They’d keep up the facade, but not Jane Craig. She’s exhausted from dealing with it all, and the thing she can’t resist in that moment is honesty. She wants her boss to understand, she wants anyone to understand, that she doesn’t get any satisfaction out of being right. She just can’t help it. And it’s awful.

Carolyn’s pick this week was the final season of True Blood! No, seriously!

This week I picked True Blood! I know, I know. Why should you waste your time on a show that’s consistently proven itself to be a mess for the past two (arguably three or even four) seasons?

Because this time, it might be different. The final season premiered on Sunday, and as someone who has been binge re-watching previous seasons in order to write recaps, I think there’s been a significant shift in the focus of the show.

What I loved about the first few seasons was how the writers grounded fantastical concepts in reality to make us care about the characters and the town of Bon Temps–yes, the show was silly, but its silliness was earned. So far this season the focus seems to be back on character development instead of intricate plots, and for the first time in a long time I was genuinely invested, even in Sookie’s never-ending romance woes.

Although if you’re sick of the Alcide/Bill/Eric love triangle, maybe this still isn’t the show for you.

Previously in Geekosystem speaking into microphones