Speculating About The Endgame for Supernatural After the Season Premiere

Has god really left the building? 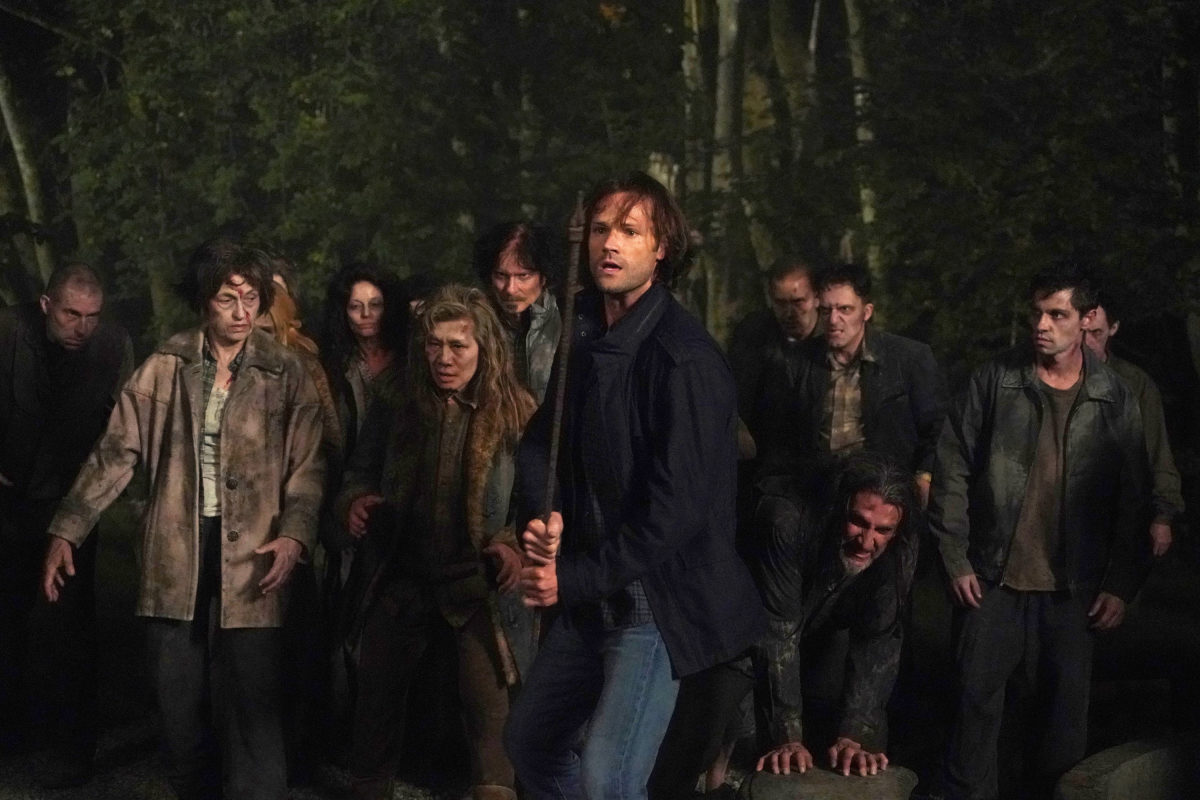 The Winchesters are starting their famous final scene, but we’re not ready to let them go quite yet. The fifteenth and final season premiere of Supernatural hinted at what’s in store for the end of road, and it certainly isn’t looking hopeful for these brothers and their angel. On top of the episode, the editors of the show, under the YouTube channel name “Shaving people, Punting Things,” gave us a new teaser for the first seven episodes of the season that hints at even darker things than zombies and murder clowns. (Seriously, how creepy was that clown????)

So what did we learn, aside from that we’ll be crying about this from now until May. In the premiere, Sam (Jared Padalecki) speculated the Chuck (Rob Benedict) – also known as God – had unleashed all of hell then truly abandoned their world, as he’d done to so many others. This means hell is empty, but at least the biys are free from divine manipulation, right?

No. The “Last Ride” trailer hints that Chuck isn’t going anywhere. We hear Chuck in voiceover, musing about his final Supernatural book. “I can see it now. “Supernatural: The End.” And the cover is just a grave stone that says: Winchester.” Ouch. But there’s another voice – possibly that of in universe Supernatural fangirl Becky Rosen? – that protests that Chuck can’t do that to the fans. But he can do anything. He’s a writer  and he says they’ll love it.

This is the kind of twisty, meta stuff we do love in Supernatural. When they show is about writing and fans and stories, it’s at its best and here we have god himself debating a fan about what they want and what’s good. It sounds like we’ll get all the fanservice we’d exect in a final season…and in the most painful ways possible. Will fans really be happy or is this preview a hint that we’re going to be angry?

Well, we’re already suffering but in a fun way. The season premiere was a bit slow in the plot department, but the highlight was seeing Jack’s corpse – complete with burnt out eyes – occupied by a blunt, kind of horny demon name Belphagor. Alexander Calvert killed it in this part, especially given that he wasn’t able to use his eyes while acting. He was funny, creepy and I completely don’t trust him. Seeing Dean (Jensen Ackles) react to the demon mentioning Dean’s time torturing souls in hell and having the meatsuit of his kinda-son tell him he was hot was golden. That and Sam (Jared Padalecki) accidentally shooting Castiel (Misha Collins) were the lightest parts of the episode. 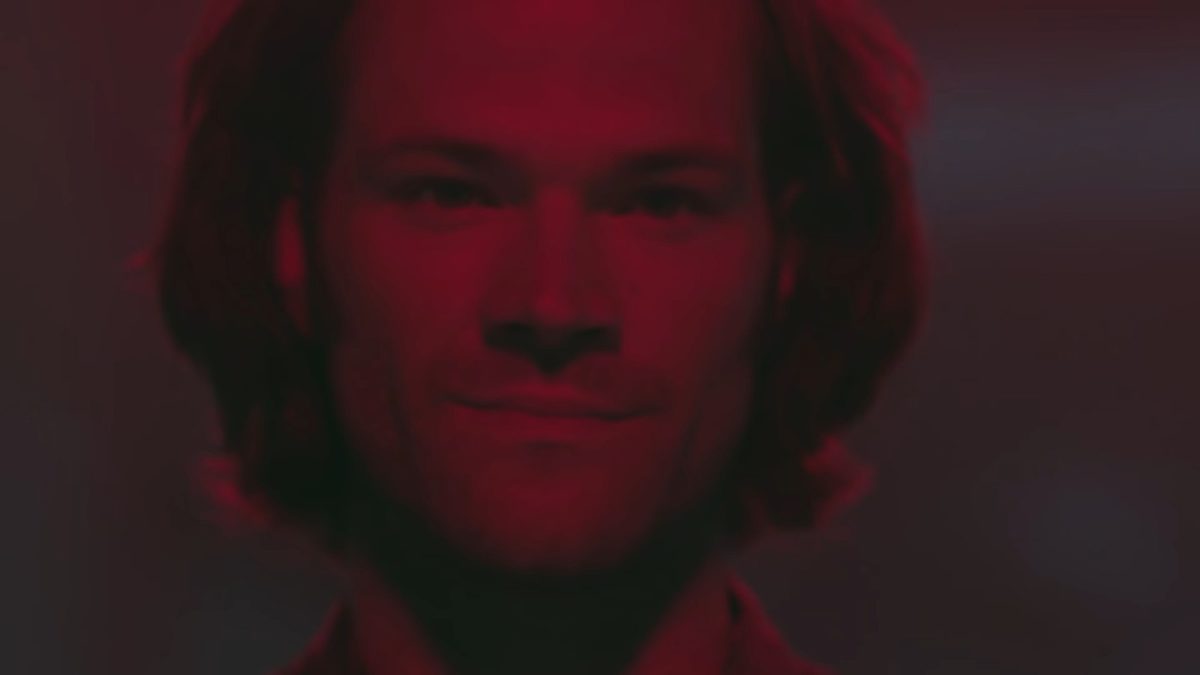 On the darker side: what the heck is up with our Sammy? If you remember, he ended last season shooting God with “the equalizer” a weapon which Chuck claimed could kill anything. The equalizer didn’t work on bullets, but according to Chuck, whatever happens to the person you’re aiming at also happens to you. Sam didn’t die when he shot Chuck, but something happened and the resulting, glowing wound is something even Cas can’t heal…and it’s giving Sam the kind of visions he hasn’t had since he was juiced on demon blood waaaaay back in season two.

That vision by the way? Bad news. We could hear Dean saying “Sammy, please” and saw a very demonic looking Sam. Is Sam going evil? Is this some sort of dream or alternate reality? We saw this same red lighting – the bunker’s emergency lights probably – in the “Last Ride” trailer, as a bearded, apocalyptic (and let’s be real here, extremely hot) looking Dean fought someone. That’s not ominous at all.

Another thing we saw in the trailer that was hinted at in the episode, and on the actors’ social media: Adam Milligan and Michael (Jake Abel). Belphagor told Dean that all the doors in hell were open, including the one on the cage containing a pissed off archangel. We haven’t seen this Michael or Adam since season five, so this is a big deal. Reminder, the Michael we dealt with last year that possessed Dean and Jack burned away his soul to kill was from another reality. We knew from Comic Con that Adam, along with Amara, Eileen and more, would be returning, but this is our first look at actor Jake Abel in what looks like a dual role. 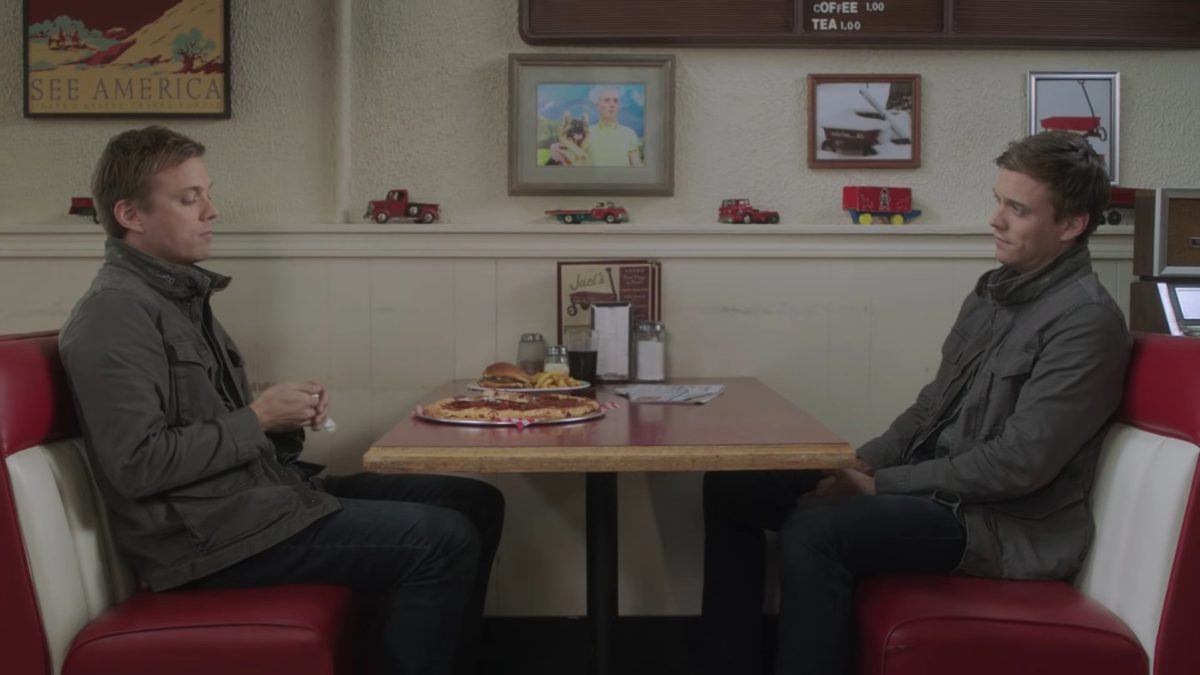 How will Michael figure into this? Will he help the guys fight the two or three billion ghosts that got spit out of hell? Will he take a spot in heaven as their battery so the remaining souls there won’t bust out and join the ghost apocalypse? Will he counsel his brother Castiel about his boyfriend Dean being such a jerk to him? Probably not that last one, though we’re sure Dean and Cas will work out their issues…eventually.

So. Evil Sam hurting Dean. Sad Cas. No Jack in sight. But can we glean anything from this season premiere about how the series will end? Maybe. I’m only going off the fact that Sam has a connection to Chuck and the idea that the boys final triumph would be them as the authors of their own story but…what if Sam and Dean end the series as the new Chuck and Amara? Meaning, they take the place of the cosmic entities and bring some balance to the cosmos in the name of free will? I’m not sure where Cas and Jack figure into all of this – maybe they live on as helpers or maybe they’re new gods too?

How ever this all ends, we’re excited for what’s to come soon, including seeing our favorite witch, Rowena (Ruth Connell) get her exquisite ass back in the game as well as the return of Osric Chau as a…ghost? Wherever the road leads, we’ll probably be crying all the way.

Supernatural airs Thursday at 8:00 p.m. on The CW.