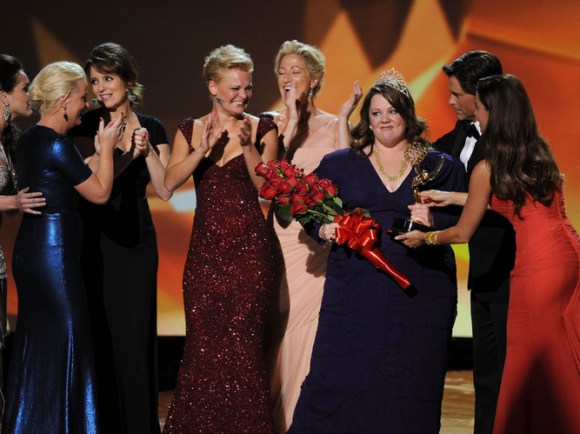 Here is everything you need to know about the Emmys: pretty much the most predictable, safe nominees won, with maybe a few exceptions. The most exciting — and I use that term very generously — moments were (as usual) related to the women nominated for Best Actress in a Comedy Series. But a certain geek-friendly win was pretty exciting, even if it was the only geek-friendly victory of the night. Let’s take a look, shall we? And find out what the moment pictured above was all about?

First, the party happening above. According to NPR, rounding up the nominees for Best Actress in a Comedy beauty-pageant-style was the idea of nominee Amy Poehler (Parks & Recreation). And as you can see, the winner was crowned Miss Emmy, and that lucky lady was … Melissa McCarthy! Well, that’s exciting! For the past few years, the award has been given to great actresses, but actresses in shows that can barely be considered comedies. More like hour-long dramedies — Toni Collette for The United States of Tara and Edie Falco for Nurse Jackie (also nominated this year) were the two previous winners. But Melissa McCarthy — someone we desperately wish could come hang out with us and be our BFF for the day and who won for her work on CBS‘s Mike & Molly — is not only a surprise, but a surprise that has you yelling “It’s about freaking time!” And the fact that the rest of present the nominees were up on stage — Falco, Poehler, Laura Linney, Tina Fey, and Martha Plimpton (!!!) — is just such a great symbol of women in comedy, being funny together without competing with each other.

So, what else happened that we should be psyched about? Peter Dinklage, winning for Best Supporting Actor in a Drama Series for his sick turn as Tyrion Lannister on Game of Thrones. Yes. Thank you, Academy of Television Arts & Sciences. An exciting win, indeed. And the only one for Game of Thrones that entire night. (It did, however, take home a Creative Arts Emmy for Outstanding Main Title Design.)

Other than that, Modern Family won almost everything else in the comedy category (including Best Direction, even though the majority of those nominees were women, one of them having directed an episode of Modern Family, but whatever). Predictable, but not necessarily a bad thing when you consider its very positive portrayal of a happy, functional gay couple with a child. To say nothing of it being a genuinely funny show. It took home both supporting actor categories (Julie Bowen and Ty Burrell), which leaves Big Bang Theory‘s Jim Parsons with the lead actor win.

The drama category was all over the place, which is also never a bad thing. But in what was a long-awaited and very pleasant surprise were the multiple honors for the dearly departed series Friday Night Lights, which gave Kyle Chandler his first Best Actor win as well as a writing award for Jason Katims. Connie Britton received a big cheer when her name was called for the Best Actress category, but Julianna Marguiles won for her role in CBS‘s The Good Wife. And despite taking home zero awards for directing, acting, or writing, AMC‘s Mad Men won for best drama series.

As for the obligatory, tear-jerking “In Memoriam” segment, the Canadian Tenors sang a — I’ll say it again — predictably lovely version of Leonard Cohen‘s “Hallelujah.” And the saddest part of all? Seeing Andy Whitfield, in all his warrior glory as Spartacus, and knowing his battle was over.

On that sad note, if you missed the Emmys, you didn’t miss much. But personally, I think Game of Thrones was robbed, big time. As was NBC’s Community, which wasn’t even nominated in any major categories. Let’s hope for better luck next year, but give one final round of applause for the winners.