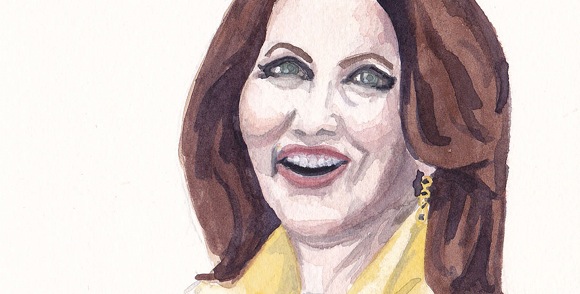 As far as art projects go, the latest from Emily Nemens is pretty work-intensive. In early 2011, the New York writer/illustrator set out to create a watercolor portrait of every single female member of Congress.

For Women of the 112th, which took sixteen months to complete, the artist referenced public domain photos, most of which featured “perfect hair and big toothy smiles, but I found some slippages, too — the occasional grimace, or looking away from the camera.”

While the project was originally inspired in part by Nemens’ realization that very few political portraits feature women, it ended up as a kind of examination of the female political persona, which, the artist says, is more focused on looking good than is the case with male politicians.

When Rep. Michele Bachmann showed up at the Republican debates last year with a perfect coif and a pound of pancake makeup, all I could think was “She is trying so, so hard to look good.” In 2008, Sarah Palin leaned on her looks as much as her platform. I was fascinated by how these women — some of the most powerful women in our country — felt they had to present themselves in public. John Edward’s $400 haircut aside, most male politicians didn’t face the same pressure.

Sounds legit to me. Several of the portraits can be found at womenofthe112th.tumblr.com, and they’re pretty neat to look at—in addition to being, as expected, very power suit-heavy.

Nemens has noted that she might undertake painting the male members of Congress as well: “Some older congressmen have pretty awesome pinks and purples to their complexion. And there’s something subversive about making a mini-Boehner.”