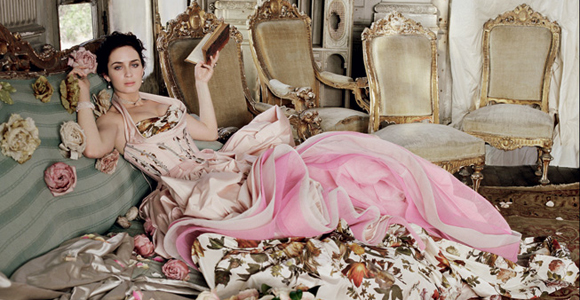 Emily Blunt, actress in The Devil Wears Prada, The Young Victoria, and The Jane Austen Book Club, has been up for some major roles in blockbuster superhero films over the last few years. Yet she hasn’t taken a single one and with good reason: She thinks the women in superhero films get the short end of the stick. Thank you, Ms. Blunt.

The actress recently did an interview with New York Magazine’s Vulture in which the topic of her near-misses with superheroes was brought up. Blunt was Marvel’s first choice to play Black Widow in Iron Man 2 and was also up for Peggy Carter in Captain America: The First Avenger, yet she turned both down. Why exactly?

“Usually the female parts in a superhero film feel thankless,” she told them. “She’s the pill girlfriend while the guys are whizzing around saving the world.”

She continued, “I didn’t do the other ones because the part wasn’t very good or the timing wasn’t right, but I’m open to any kind of genre if the part is great and fun and different and a challenge in some way. I would love to do a comic-book movie or a science-fiction film that would scare the bejesus out of me.”

Very, very interesting. It’s nice to see a lead actress come out and say what we’ve all been thinking for years. But it seems as though Blunt really wants a role that will put her in the center of the action.

“Maybe I need to be James Bond,” she said. “I just did Looper, because it’s so original and breathtakingly cool. The time-travel aspect is just a backdrop to visit this heightened world, where you’re atoning for something and attempting to be more than you’ve been.”

So maybe she’s just waiting for a superhero film where a popular woman character is in the starring role instead of being relegated to the sidelines. Nothing wrong with that. We know Black Widow eventually went to Scarlett Johansson and Peggy Carter was played by Hayley Atwell, but we’ve yet to see Marvel start production on a film for a major superheroine in their recent line-up of releases.

Blunt is currently starring in Salmon Fishing in the Yemen with Ewan McGregor and will be in the upcoming, The Five-Year Engagement with Jason Segel.