“A Russian mayor that won’t kidnap and kill you!” Cuz it makes the competition look like, you know... 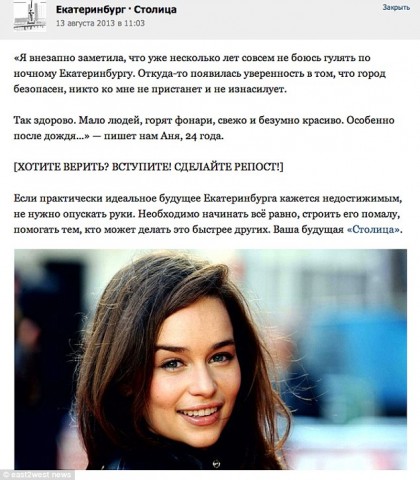 We know very little about Russian politics, but the phrase “Russian politics” alone make us feel like there’s probably something sketchy going on. Game of Thrones actress Emilia Clarke probably thinks so, too, because her photo and likeness were used without permission for a anti-rape campaign poster there. Whoops?

Mayoral candidate Yakov Silin attempted to pass off the above image of the actress as “Anya,” a 24 year old fictional resident of Yekaterinburg. Clarke is actually 26, so hey, we guess it’s a compliment.

Why Emilia Clarke, though? Perhaps Silin was looking for a face that people would recognize but not know why — let’s face it, seeing the Mother of Dragons without her trademark silver locks is a little disorienting. Or maybe Vladimir Putin, who has publicly backed Silin, told him it would be a good idea. We imagine that in his head, Putin is pretty convinced that he is the Russian equivalent to Khal Drogo (he’s probably more of a Tywin Lannister, but don’t tell him that).

Either way, Russian Internet users figured it out pretty instantaneously and bombarded the candidate’s website with comments about the deceoption. You know… because she’s an Emmy-nominated, internationally famous actress? Come on, guys.

But before you get all excited thinking, “Well at least they’re anti-rape posters that will maybe make a difference in the community,” hold up: they’re actually propaganda posters that claim Yekaterinburg is already safe from rape, according to the Daily Mail’s translation:

‘I suddenly noticed that for the last couple of years I’m not afraid to walk at night in Yekaterinburg.

‘I now have confidence that the city is safe, that no-one will attack me or rape me.

‘It’s so cool … There are only few people on the streets, the streets have lights, the city is fresh and incredibly beautiful. Especially after it has been raining.’

So, you know, not exactly helpful.

Moral of the day? You don’t just need consent for sex — you also need it for photo permissions. Otherwise you might become the laughing stock of the Russian Internet community, and nobody wants that.

(via Uproxxx, image via Gage Skidmore)