Salma Hayek, Kate Winslet, and Others Celebrated at the Elle Women in Hollywood Awards 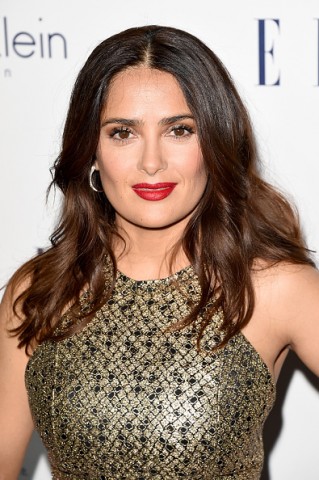 The Elle Women in Hollywood Awards are a great excuse for Hollywood’s female heavy-hitters to get together and recognize the strength they can find in each other while navigating the entertainment industry at any level. This year’s award recipients were shining examples of women who work toward leveling the playing field for themselves and for those women climbing up the ranks behind them.

This year, Elle honored Amy Schumer, Ava DuVernay, Salma Hayek, Carey Mulligan, Alicia Vikander, Kate Winslet and Dakota Johnson. Before awards were handed out, Elle Editor-in-Chief, Robbie Myers, highlighted some statistics to show how necessarily it is to consistently work toward more women in power positions, mentioning that only 20% of Congress and 7% of senior movie studio execs are women, and that women direct only 4% of studio films.

As reported by The Hollywood Reporter, when accepting her award, Hayek talked about her early years in Hollywood, and how change is really going to come:

I was told, ‘There are no leading parts for Mexicans in this town and especially for Mexican women.’ And they were right. It takes a generation of women that will not accept a reality that is fucked up and unfair to get angry and take adversity and transform it into power, to make a change.

Kate Winslet, when accepting her award, spoke about her teenage daughter, Mia, and what it means to be a good female role model:

And Amy Schumer emphasized how important it is for women in Hollywood to have each others’ backs:

I was waiting for this big backlash to tell me that I was disgusting and that I had no right to be here, and it never came. … Don’t waste your energy being angry and fighting against something that might not even show up to fight you. We just need to focus all our energy on raising each other up and living to our full potential. Because if we don’t do it, who will?

Don’t accept how fucked up and unfair sexism is. Be confident. Support other women. Got it. Now let’s get out there and change Hollywood!