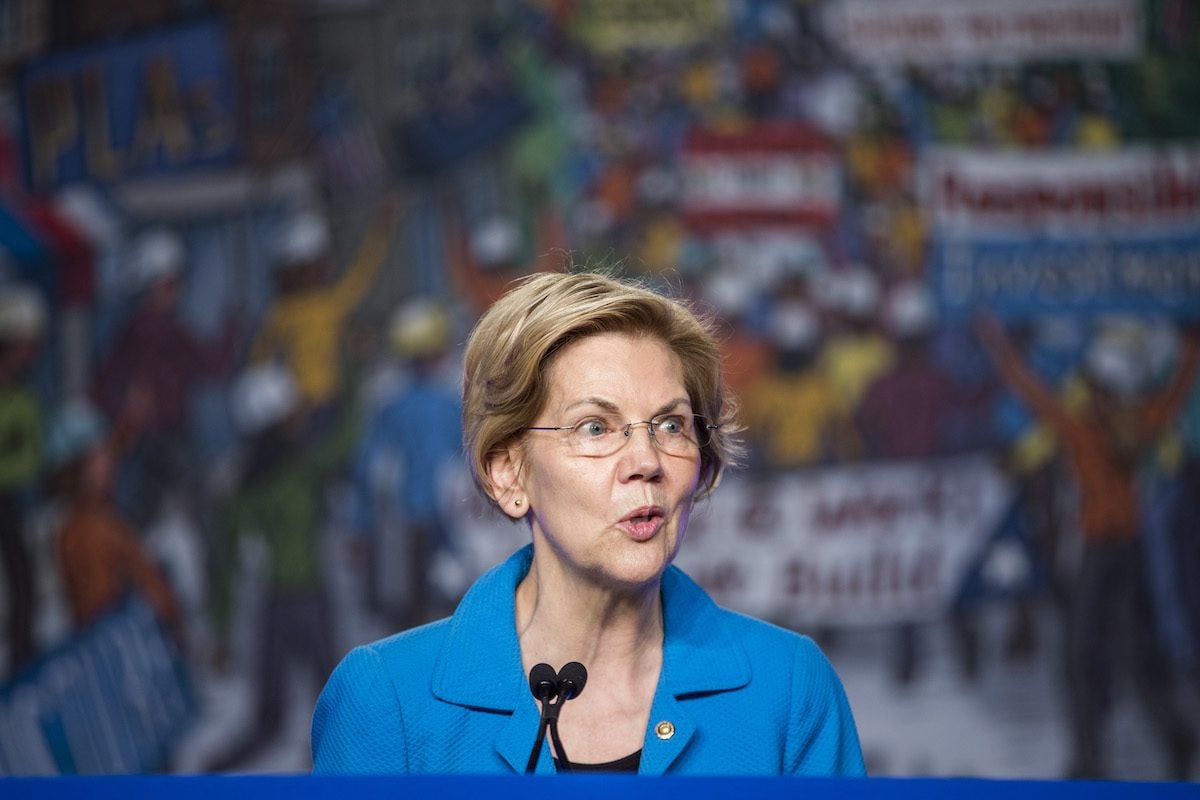 In an overcrowded primary field, Democratic 2020 candidates are working hard to carve out their niche and create a persona that stands out from this ludicrously large pack. Beto and Mayor Pete are competing for Coolest/Most Energizing Young Dude. Biden is going as middle-of-the-road as possible. Kirsten Gillibrand is making it clear that she is Relatable as heck as she talks about her faults and her growth and then goes out and parties with drag queens.

Vana and the amazing queens at the Blazing Saddle in Des Moines invited me for a visit tonight before their show. I felt underdressed, so I brought a dress I picked up yesterday—turns out it fit me, but it fit Vana even better! Thank you for having me, ladies! pic.twitter.com/l0ISbENSwg

Elizabeth Warren, meanwhile, is establishing herself, just as she has for years, as a kickass and extremely qualified leader.

Monday morning, Warren introduced yet another ambitious and detailed policy proposal, calling for universal free access to public college education and the elimination of existing student loan debt. In a lengthy essay on Medium, Warren lays out the hows and the whys of her plan, which would be paid for via her proposed “Ultra-Millionaire Tax,”  a 2% annual tax on the 75,000 families with $50 million or more in wealth–wealth that as of now largely goes untaxed thanks to a number of workarounds the ultra-rich have established to make sure it never gets to trickle down to the masses.

Student loan debt is crushing millions of families. That’s why I’m calling for something truly transformational: Universal free college and the cancellation of debt for more than 95% of Americans with student loan debt. Read all about it here: https://t.co/IG9J5CiNb7

Her plan involves cancelling up to $50,000 of student loan debt for 42 million Americans. Rather than waiting on that nonexistent trickle down, she writes that this will “provide an enormous middle-class stimulus that will boost economic growth, increase home purchases, and fuel a new wave of small business formation.” And then, Warren writes, “Once we’ve cleared out the debt that’s holding down an entire generation of Americans, we must ensure that we never have another student debt crisis again.” That comes by “recognizing that a public college education is like a public K-12 education — a basic public good that should be available to everyone with free tuition and zero debt at graduation.”

One of the most common arguments against free college and loan forgiveness is that it’s unnecessary, as “proven” by the fact that other generations didn’t have these things and they turned out just fine. Therefore, young people today must just be lazy and entitled, right? That boomer-esque attitude is just plain misinformed.

Warren explains that it’s “virtually impossible” for a young person today to take advantage of the sorts of opportunities she had in seeking her own education decades ago. “As states have invested less per-student at community colleges and public four-year colleges, the schools themselves have raised tuition and fees to make up the gap,” she writes. “And rather than stepping in to hold states accountable, or to pick up more of the tab and keep costs reasonable, the federal government went with a third option: pushing families that can’t afford to pay the outrageous costs of higher education towards taking out loans.”

Those who have and control large amounts of wealth and power want you to blame young people and others who are struggling under the financial burden of seeking higher education. Because that way, they don’t have to admit that the game is rigged in their favor.

“We got into this crisis because state governments and the federal government decided that instead of treating higher education like our public school system — free and accessible to all Americans — they’d rather cut taxes for billionaires and giant corporations and offload the cost of higher education onto students and their families. The student debt crisis is the direct result of this failed experiment,” writes Warren.

Also, the we turned out just fine without these programs argument is using that “we” awfully generously. Because the opportunities and successes of previous generations have never been distributed evenly. Warren’s plan would aim to significantly close race-based wealth gaps. It would “make free college truly universal — not just in theory, but in practice — by making higher education of all kinds more inclusive and available to every single American, especially lower-income, Black, and Latinx students, without the need to take on debt to cover costs.”

Elizabeth Warren’s presidential campaign seems to be a genuine extension of the sort of leadership she’s exhibited over her time in the Senate. She has called for the House to begin impeachment proceedings for Donald Trump while other 2020 candidates have remained largely silent on the issue. Her CNN town hall event Monday night will be centered on policy, while a number of other candidates have yet to attach any specific policies to their campaign, opting more for broad strokes of a general set of values.

[Buttigieg says he likes Phish]
“MY FUTURE PRESIDENT IS SO COOL!”

Biden: I was your favorite President’s best friend.

Voters: Hard choice, which white guy should we pick?

On top of all of that, Warren also started off her week Sunday by guest blogging about Game of Thrones for The Cut.

Why do I love #GameOfThrones? It’s the women (duh!). Looking forward to tonight’s episode. In the meantime, you can read my review of the season premiere here. https://t.co/9AkRWW6kjn

Elizabeth Warren has reportedly been having trouble meeting her fundraising goals and she hasn’t broken out of that overstuffed pack in the way many of her supporters may have expected. Hopefully, this ambitious proposal gives her a well-deserved boost.