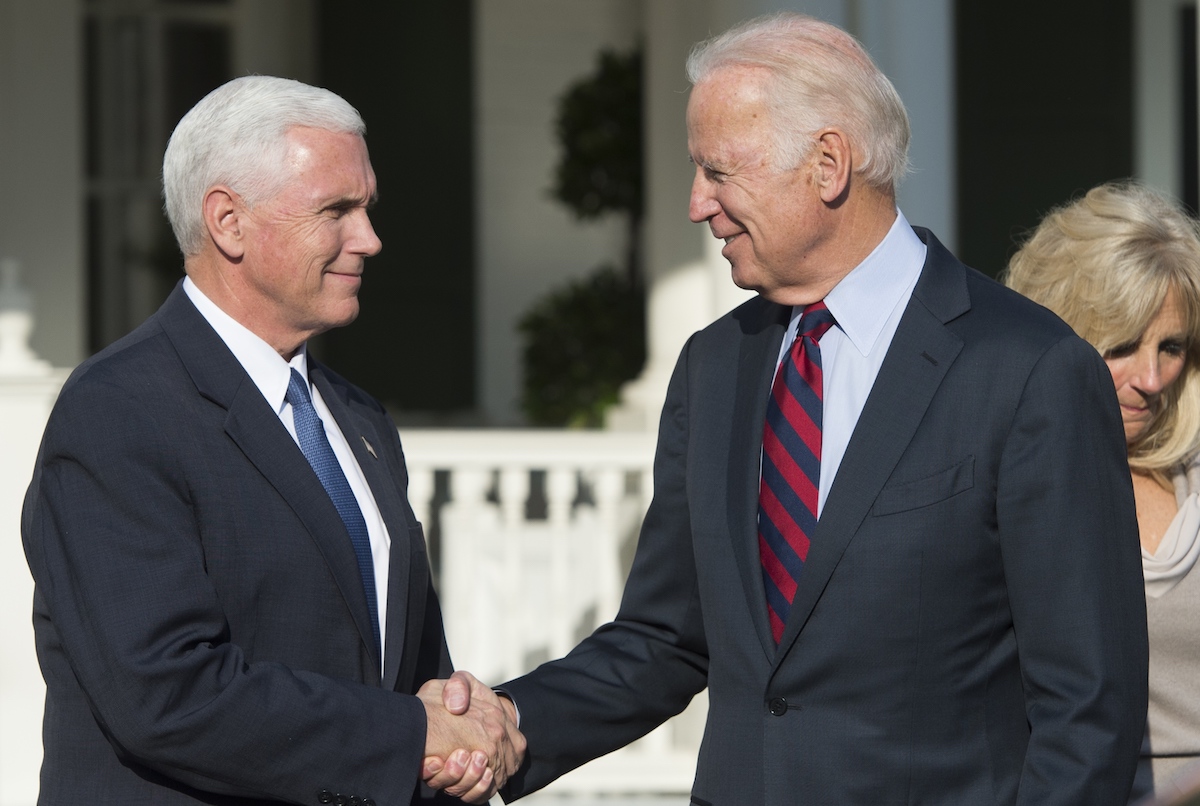 Joe Biden was in Omaha Thursday, talking about foreign policy with former senator Chuck Hagel. In his speech, Biden recalled Mike Pence’s recent awkward experience at the Munich Security Conference where he was repeatedly met with silence while very clearly pausing for expected applause. One of those moments came when Pence said he brought “greetings from the 45th President of America, Donald Trump” and the reaction from the crowd was total silence.

Speaking to a security conference in Munich, Pence tells his audience he brings greetings from President Trump… and not a single person claps. #awkward pic.twitter.com/JkFpsKqfgk

In describing that moment, though, Biden uses some questionable language—the question being, in what world would Mike Pence be described as a “decent guy”?

Here’s what he said: “The fact of the matter is it was followed on by a guy who’s a decent guy, our vice president, who stood before this group of allies and leaders and said, ‘I’m here on behalf of President Trump,’ and there was dead silence. Dead silence.”

His point seems to be that Mike Pence didn’t deserve to have to endure the reactions that come with being associated with Trump. That’s what it sounds like his implication is with that “decent guy” comment.

Except he very much does deserve that. Mike Pence was brought in to make Trump—a philandering, once-pro-choice conman—more appealing to evangelical voters. And he has made the most of his time in office, just as he did in Indiana, pushing a virulently anti-LGBTQ+, anti-choice agenda. He is not a “decent guy.” He’s a hateful, harmful monster wearing a clean-cut, gee-whiz “decent guy” costume.

Mike Pence believes in gay conversion therapy and allowed an HIV outbreak to happen in Indiana. No, Joe Biden, Pence is not a decent guy. He’s scum. https://t.co/QAHQQ6Nurp

This is the man that Joe Biden – the former Vice President who is a Democrat – called a “decent man.” Mike Pence is a religious zealot with a long history of misogyny and homophobia. This 👇🏽 is incitement. https://t.co/egRuD3Qy1F

There’s no context in which Mike Pence is a decent guy. He’s the (extremely powerful) second in command to a serial sexual predator in an administration soaking in bigotry and waging war against our democracy, our allies, the free press, and basic decency. https://t.co/vhqauyFhPF

My feelings when Joe Biden just referred to Mike Pence as a “decent guy” pic.twitter.com/ogEoU8u8G8

Cynthia Nixon was one of the many people to tweet their disappointment at Biden, and he responded with clarification of his context.

You’re right, Cynthia. I was making a point in a foreign policy context, that under normal circumstances a Vice President wouldn’t be given a silent reaction on the world stage.

But there is nothing decent about being anti-LGBTQ rights, and that includes the Vice President.

So yes, his point was about Trump. But he didn’t need to present Pence as an innocent bystander in all of this. It doesn’t make Trump appear worse or less competent to pretend like he doesn’t surround himself with terrible people desperately working to fulfill their own hateful agendas.

Thanks @JoeBiden. Appreciate the response. But please understand from where we sit, his dehumanizing of our community disqualifies @MikePence for the honorific of ‘decent’, regardless of the context.

This isn’t the first time Biden has had fond words for Republican men. At this same event, he praised “the character, integrity and humanity I’ve seen up close” of former GOP senator  Chuck Hagel. He’s called Trump’s secretary of state Mike Pompeo a “good guy.” And he often referred to John McCain as his “brother.” Biden hasn’t officially entered the 2020 race, but it will be interesting to see whose vote among the other candidates he ends up eating into.

There’s been a big debate among Democrats lately as to whether the recent flood of progressive House members will hurt the Party by alienating more moderate voters, or whether they will do better in 2020 by embracing progressive voters. Biden has made it clear that he’s a middle-of-the-road kind of guy, and while there’s something to be said for seeing the good in everyone and all that, it also means this isn’t likely to be the last time he tries to get us to sympathize with a bigot.