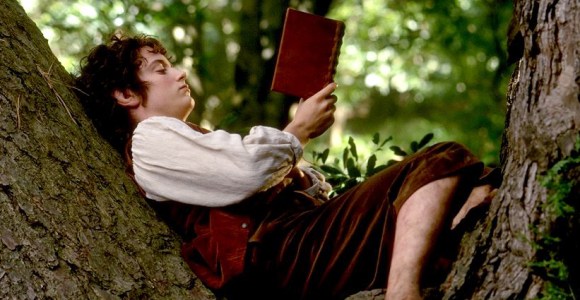 We’ve known for some time now that actor Elijah Wood was set to reprise his role as Frodo in Peter Jackson’s The Hobbit but as fans of the J.R.R. Tolkien book know, Frodo isn’t actually in The Hobbit. It presented a challenge of course but Jackson is all about overcoming obstacles, especially when it means bringing back fan-favorites. Rumor was that Frodo would perhaps act as a narrating bridge between An Unexpected Journey and There And Back Again, the two parts of the film, but until now, we didn’t know if that was actually the case. If you want to find out what Frodo will be up to in The Hobbit and a few other spoilery bits, hit the jump. If not, quietly head back to the Shire.

Ain’t It Cool News’ Quint was asked to spend two months on set of The Hobbit in New Zealand (lucky duck) to report back on just about everything. Well besides making us jealous with his gorgeous set photos, the writer has given us some hard info on what Elijah Wood’s role would be in the films. Here’s what he saw while the actor was filming:

What’s Frodo doing in The Hobbit? I don’t want to spoil too much, but I can say that Frodo is part of the connecting tissue between The Hobbit and Fellowship of the Ring.

In fact, the next shot was an over the shoulder on Elijah Wood hammering a sign up on Bag End’s front gate: “No Admittance Except On Party Business.” You guys should have an idea where that puts this moment in the timeline.

Martin Freeman stood in for Ian Holm, who shot all of his scenes and close-ups in London. They would sometimes play footage they’ve already shot to remind themselves of what they had done previously and to help them match up shots. Peter and crew did that for these reverse shots on Elijah and I got to see Ian as Bilbo once again. It was quite extraordinary, actually. Seeing Ian in close up, wearing the wig, the vest and the pointy ears just put a smile on my face. 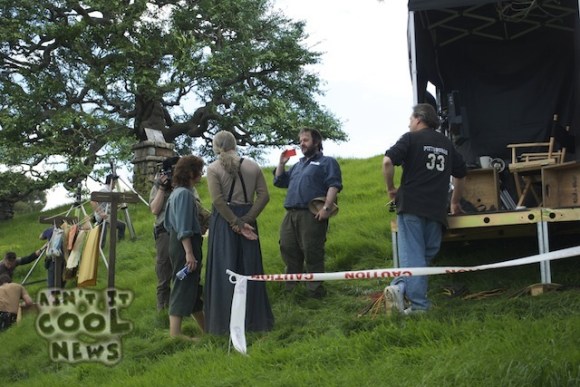 Interesting, so Freeman stood in for Holm for the scene instead of just having whoever holds the script do it, which is what’s normally done. Quint mentioned that Freeman took on some of Holms exact vocal inflections for it as well even though his parts will never be on film. Here’s a few more details.

Their conversation is about Gandalf and if Bilbo thinks Gandalf will show up. Bilbo says “He wouldn’t miss a chance to let off his whiz-poppers. He’ll put on quite a show, you’ll see,” and Frodo grins, saying he’s going to go surprise him and bounds off down the path like a kid at Christmas. When I say he bounds down the path that’s not an exaggeration for illustrative purposes. He was damn near skipping, a glimpse of that pre-ring Frodo we meet in Fellowship.

After Frodo leaves the frame is very wide featuring The Shire in all its glory; The Green Dragon and mill smack dab in the middle.

It’s my understanding this shot will transition to “60 Years Earlier” with Young Bilbo sitting in front of Bag End contently smoking a pipe and casually blowing smoke rings as Gandalf comes along and presents him with his adventure.

So from this information it seems as if Wood will be both at the beginning of the first Hobbit film and at the end of the second, almost as if the entire films were flashbacks from his perspective. In the film world they technically are even though The Hobbit was written before Lord of the Rings but it seems like a rather unobtrusive way to fit the character in.

What do you think of the new details?

(Blastr via Ain’t It Cool)