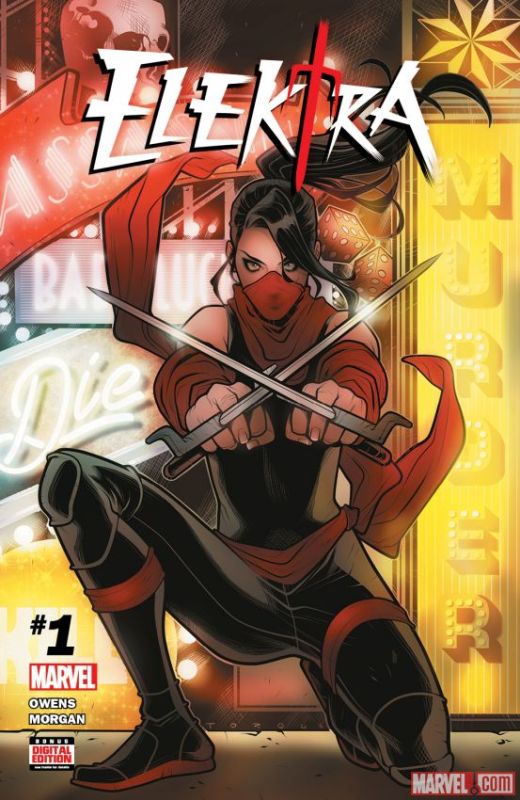 Elektra is ditching Hell’s Kitchen for greener pastures—Las Vegas. Elektra #1 finds her on the West Coast and trying to make sense of her new environment while hiding in plain sight. The comic is being written by Matt Owens, one of the writers from Netflix’s Luke Cage, and is illustrated by artist Alec Morgan, who also worked on DC’s Aquaman series.

“When we find Elektra in this story she is trying to hide in plain sight,” Morgan told Marvel.com. “She’s running. From everything. Vegas is a place that is extremely unfamiliar to her so that makes it perfect for her to hide out. But much like New York, Vegas has a dark side. And Elektra may not be able to stay out of trouble for long.”

Trouble finds her in the form of Arcade, the classic Marvel villain who first popped up in Marvel Team-Up #65. “[Arcade] is so kooky. But at the same time he is not someone to be underestimated,” he added. “He’s a brilliant inventor and a sadistic killer. He’s incredibly dangerous. It’s a different kind of threat for Elektra. As far as his interest in Elektra, she is one of the most formidable killers in the Marvel Universe. She fits perfectly into the new game he has constructed. So when she comes on his radar he simply can’t resist!”

This formidable threat is what will eventually bring her back to New York City. Elektra #1 heads to stands in February 2017 and will feature cover art by Elizabeth Torque.