Baristas be going through it, huh? 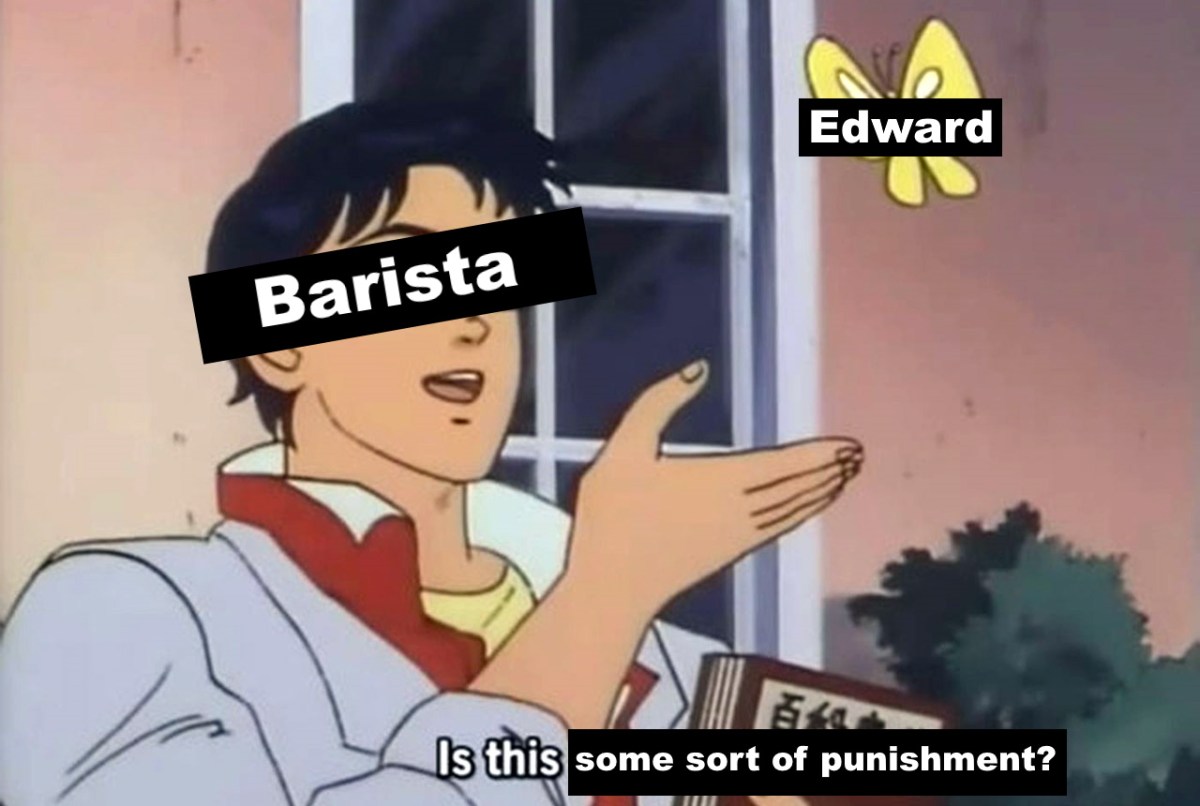 My first thought was, “Is there Twilight discourse happening again?”

My second thought was a Tim Burton-themed meme because of Edward Scissorhands.

My third thought, which ended up being the correct one, was, “Someone name Edward has done something so egregious that they’re now trending on Twitter(dot)com.”

On todays episode of why i wanna quit my job. pic.twitter.com/vKAtRKNRwe

Folks who work in the service industry (or who used to work in the service industry, like me) will tell you that customers like Edward are not a rarity. You will, most definitely, have to deal with a customer who really stretches that damn “always right” mentality. Best case scenario, your manager shares an eye roll with you. Worst case? It’s district manager visit day and they offer a gift card to the customer if they think you didn’t smile enough while trying to study an order that’s more complicated than calculus.

Josie’s tweet has inspired other baristas to share stories about their own Edward, complete with pictures of how complex the order was. Shout out to the receipt paper for being worn down to its last lifeline for these.

i raise you this pic.twitter.com/07mhU0IyED

this order comes in every other week pic.twitter.com/PAdcIFotyv

Some wondered if these orders got so intense because of app-based ordering, which lets you customize items from the safety of your own home, vehicle, or wherever else doesn’t have a line of people giving you blank stares because it takes longer than a Marvel movie credit sequence to say your entire order.

The mobile app? Just means you don’t have to try to hide your exhaustion when Edward shows up and gives a full-on musical number of an order, and in person, Edward’s probably annoyed if you can’t remember it all in one shot.

you’d be surprised . a lady ordered this in person with a completely straight face 😐 pic.twitter.com/2OuTuN3Hti

One thing I strive to do as a person who inhabits space in the world is to NEVER be the one that retail/food service/customer service workers have stories about—at least not in the “trending for all the wrong reasons” sense. The thread of the initial tweet has SO many stories, from baristas, other service industry workers, and even other customers who have witnessed Edward live, and in living color.

My time in the service industry was at a couple of different retail stores. Seeing this long list of orders gives me flashbacks of several holiday seasons with customers asking for extremely specific items, right down to baby doll eye color and specific outfit combinations. And don’t get me started on working in video game stores during hot system launches and the number of times I’ve, quote, “Ruined Christmas” because, despite checking the back, the console was sold out.

Even so, I can’t imagine, on a regular ol’ Monday morning, being responsible for making drinks that sound like they’re a part of a comedy sketch that pokes fun at a specific set of customers with a specific type of haircut.

I’d like to think that Edward wouldn’t know if the drink actually has that “5 Banana” and various degrees of caramel, but you know what? Edward knows. Edward’s the type to take a sip and comment on what they think is missing and ask (read: TELL) you to remake it.

Don’t be an Edward.