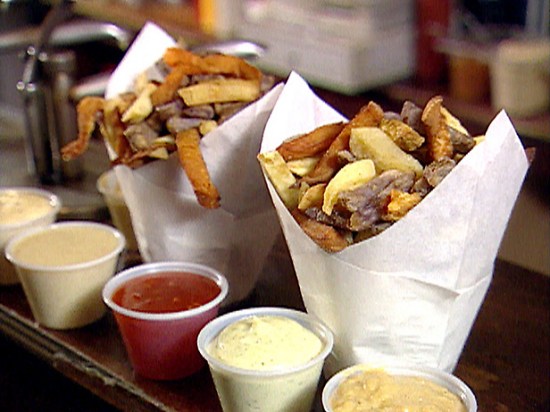 This week in Editors’ Picks: James dips all the things, Rollin has some friends, and Ian argues about science.

Food is pretty great. We all know this. You either eat a ton of it because it’s great, or you avoid a ton of it because it’s great and you know you shouldn’t stuff yourself. Since food is so great, it makes sense that putting food together in certain ways makes it even more great. If available, I like to put my food in other food. Dipping is pretty much the best way to eat anything. Fries in ketchup, brisket sandwich in au jus, cookies in milk, nachos in cheese, and bread in whatever liquid your dinner left over on your plate.

Yes, dipping might be a simple concept, but you should expand your dipping horizon and put stuff together that may otherwise seem like a bad idea. We’ve all tried fries in ice cream, sure, and it’s not bad, but if you don’t expand your dipping horizon, you probably wouldn’t know that barbecue ribs in whipped cream is actually fairly tasty, or a cheeseburger that happened to fall into some queso dip isn’t redundant on the cheese. You might not find the best combinations all the time, but you’re bound to find a new way to eat an old favorite.

There’s something to be said about the familial feeling one gets when exploring virtual worlds with the same strangers again and again until they’re no longer strangers. It’s different from colleagues from work, or your actual family, in that nearly all interaction happens on your prerogative. Nobody’s making you boot up WoW or EVE Online; you choose to take part. The communal response from EVE Online to the death of Sean Smith, otherwise known as “Vile Rat,” has me absolutely fascinated and filled with longing. I’ve met my fair share of friends known only by their handle, only to have them disappear without a trace. What happened to them? Who knows. Could be they just stopped playing, or they could be dead. Smith was well-known enough, and perished in such a cruel way, that his departure has obvious reasons. Others aren’t quite as famous.

Years ago, one such friend decided that his character had run its arc in a text-based browser MMORPG that we played together. He played out his character’s death, and never returned. This was someone that I’d interacted with on a regular basis, over the course of years, that suddenly no longer existed. As silly as it might seem, my own character grew despondent and depressed. By extension, so did I. Even when presented as a virtual avatar, there’s a real person back there somewhere. It’s not odd to then connect with people, regardless of the medium. I’m patiently awaiting the moment I once more have sufficient Internet access to play online games again. I want to find a new community to explore.

For the last few months and the next few we have to look forward to, we’ve gotten to hear Mitt Romney and Barack Obama’s pitches for why they’re the best man to lead America through the coming four years. They’ve debated, via campaign proxies, everything from abortion rights and gun control to who loves freedom the most and what the best thing about freedom is. (Kidding, this is not up for debate. The best thing about freedom is clearly Mom, Baseball, and Apple Pie, in that order. Anyone who says otherwise is a puppy-kicking commie bastard.) The candidates will debate one another just three times in October, but between sexier issues like national security and ones that seem more pertinent to many Americans, like employment and the economy, a real conversation about science policy is not on the schedule.

Let’s repeat that, and parse what it really means for a moment: An exchange of ideas and a debate on policy that covers everything from funding for research and science education to the salient point of whether candidates believe that climate change is a thing is not on the table. A frank discussion of how best to keep the engine of American innovation humming and how to harness that innovation to create badly needed jobs is not on the table. Neither of the two men who will take the most powerful seat at the world table thinks they need to take time out of their baby-kissing schedule to offer their take on fracking, on the role of the NIH, on how to combat climate change, or on a hundred other topics in science that are among the most pressing issues of the day, but will get swept under the rug because they don’t make for great sound bites.

Don’t settle for that. You deserve better. You deserve a science debate, and if you head over to ScienceDebate.org, you can demand one. Whether you’ll get it is another matter entirely, but that’s the democratic process for you. ScienceDebate.org is a group of scientists, doctors, researchers, universities, professional organizations, and concerned lay people trying to get a straight answer out of presidential politicians on the pressing science issues of the day. You can get a look at the questions the group wants leaders to answer on the record here, or head here to sign your name to a call for a serious conversation about science policy — about education, public health, space exploration and Internet freedom — to be a part of the presidential debates.