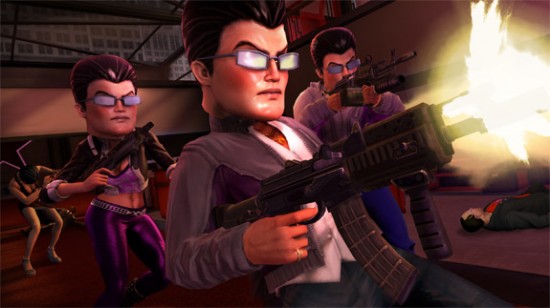 This week in Editors’ Picks: James gets immediately disappointed but then pleasantly surprised by an RTS MMO, Rollin gets really into sandbox games that provide sex toys as weaponry, and Ian becomes a mobile superhero so he doesn’t have to read on a train.

If I had a genie and a lamp, and could wish the most perfect video game into existence, I’d wish for a Civilization MMO. Sure, there’s that Facebook one, but its existence is doing more harm than it not existing. Strategy MMOs haven’t really existed in any worthwhile fashion, so I was delighted when I built my new gaming PC and remembered that Age of Empires Online is free to play.

After dealing with the train wreck that is Games For Windows Live and entering the game proper, I was instantly disappointed. AoEO isn’t what I’d wish for. I’d want to control a civilization in a persistent world full of other civilizations that I share a map with, but not in the cheap browser-builder style. I spent many gigabytes downloading the AoEO, so I stuck with it for a bit anyway. I ended up pleasantly surprised. It’s not my dream game, but it’s a fun RTS with MMO elements all over the place.

Instead of a traditional character, you have an entire civilization — Egyptians, Romans, etc. — and those fill up your character slots. Each civilization has a capital city, which is similar to an RTS city setup, but is more passive. It’s where you accept quests, build up your equipment, fiddle with your tech, and generally hang out. Once you accept a quest, you travel to a more standard RTS map, and play a traditional RTS mission: Eliminate the opposing force, liberate some captured civilizations, survive an onslaught until the cavalry arrives, collect materials in a short amount of time — the usual stuff. Destroying anything in a mission gives you a small amount of overall civilization experience points, and finishing the mission gives you a large boost. Your civilization levels up, learns tech, and gains access to better structure and unit gear. There are also “raids” at endgame, which are tougher quests that require some co-op play, and players can PvP and play normal co-op missions as well.

So, it’s not a persistent world where your city might be invaded while you sleep, and the capital cities (I’m over one fourth of the way to the level cap) don’t seem to really interact like cities would in, say, Civilization IV, but if you would rather play a well-made RTS than a grind-goblins-in-a-forest MMO to satisfy your leveling and crafting urges, Age of Empires Online is free to play. Give it a go.

There’s a certain level of absurdity one must accept when playing a Saints Row game. I knew this before I ever started playing the most recent installment in the franchise. What I didn’t realize, at the time, was that “absurdity” broadly covers things like giant purple dildo-bats, diving through the windshield of an airplane in order to come out the other side, and being able to essentially run around as a fat naked man.

Saints Row: The Third definitely plays like a version of Grand Theft Auto that never finished high school, got involved with a certain type of person, began doing bath salts, and decided to be like those guys from Jackass. Even so, I can’t manage to stop. The number of customization options, combined with the variety of missions, has me scrambling to scrounge up virtual cash just to buy my next meth lab. This is not something I could have even imagined I’d utter before this game came into my life.

I usually treasure my commute for the chance to get a little bit of reading in, but sometimes, man, you just don’t have the wherewithal to wake up and stick your nose in a book — especially if your current read is a nearly 1,000 page tome that could be best described as “historical survival horror.” On those days, there is nothing better than putting in some decent gaming from the comfort of your own phone.

The first chapter of Avengers Initiative looks to have saved me from sinking any more time into Jetpack Joyride and Puzzle Quest during my commute, and for that, I am thankful. Basically, you’re looking at an Infinity Blade clone starring the Hulk. That’s enough to keep me from wishing I was shooting birds out of a slingshot or already at work, and really all I ask out of an iPhone game. I’m determined to give it a shot as a platform, but still not entirely sold on it.

While the game isn’t super deep or utterly enriching, it is a fun combat experience with an emphasis on timing and enough combos to feel to keep one engaged. There’s just something more satisfying about knocking around recognizable faces like the Super Skrull instead of another helmed figure without a name. At $6.99, the price might seem a little steep, even for a pretty good actioner in an ecosystem largely devoid of them, but the price for the first chapter, featuring the Hulk, also includes coming updates starring Thor, Iron Man, and Captain America.

Presumably, combat will be sharpened up a bit in these later chapters. It’s far from bad right now, but could use some polish on a few rough edges, timing-wise. That works fine for a game in which the protagonist is not exactly heralded for his subtlety in combat, but playing as Steve Rogers is going to feel wonky without a little bit of a lighter touch. Or hey, maybe I’m just still bad at the game right now? It’s not unlikely.

The game’s Marvel XP system also allows you to dovetail your gameplay on the iOS games with the popular Avengers Initiative social game for Facebook, which I am not playing. Or rather, which I am not playing yet. There are also plenty of unlockable goodies, including a bevy of skins that affect look and gameplay. And man, I’m just itching to put on that Maestro Hulk suit from Future Imperfect.