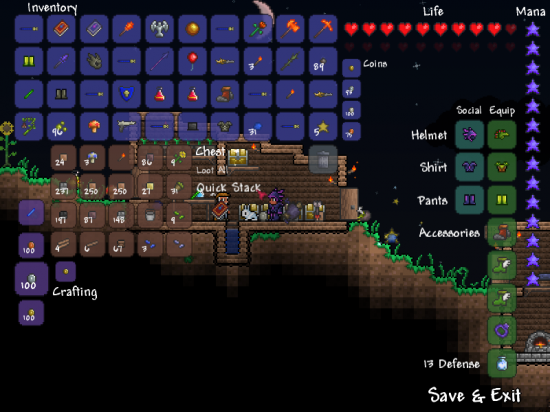 This week in Editors’ Picks: James and Rollin are busy playing games that you might think are ripoffs or generic at first glance, but are actually drastically different from what they initially seem.

When Terraria first released hot on the heels of Minecraft, and large portion of the gaming world collectively groaned, but gave a hand to how quickly Terraria was able to crib Notch’s mining, building, and survival game. Some of you may have stayed away from Terraria for just that reason — that it seemed so similar to Minecraft, and was clearly riding on its blocky coattails. After the Steam Summer Sale was over, I found myself with some new games, one of which happened to be Terraria. I figured it was worth a shot for only $2.49.

The game doesn’t present the best package upon its initial load, as it takes quite a while (in 2012 terms) for the engine to create a new world. Before that, however, one must create a character, but the interface is nothing less than baffling. It’s not baffling in the way where you can’t figure out how to use it, but rather, in the way that it’s missing essential mechanisms. For instance, you can choose the color of your character’s clothing, but only with plus and minus buttons that scroll through 0 to 255 for red, green, and blue color mixing. Sure, white is easy to figure out, but everything else is a little obnoxious — you can’t even make black. Yes, that’d just be zeros for each color, but at some point, the character creator won’t go below an undefined number based on the other two. There’s no color palette from which to choose. Not a deal breaker by any means, but baffling.

Once you make your character, you’re presented with a world that looks similar to Minecraft: Blocky textures of terrain, everything is able to be dismantled and built again. After a few hours, though, you’ll realize the game could only be more different from its obvious Minecraft inspiration by being a shallow first-person shooter or a falling blocks puzzle game. You gather materials in Terraria, and you craft them into usable items, but that’s not what the game is about. Minecraft is about building some man-made affront to a blocky god, whereas Terraria has more in common with an MMO. You collect materials to make your equipment to help you kill difficult monsters in order to get better equipment in order to kill harder monsters. Eventually, boss fights can be triggered, and the game shifts into a more difficult mode with better materials available to make better items. There’s no true end to Terraria, just like there isn’t in Minecraft or an MMO. You set a goal, then work to meet it. In Minecraft, that goal is usually to build something amazing to show off. In Terraria, it’s to get a certain set of gear or kill a certain boss.

These days, I mostly fiddle around with my Nintendo DS when I feel like playing a video game. The original Devil Survivor stuck around for quite some time, being one of the few games I played through to completion multiple times. It’s looking like Devil Survivor 2, its sequel, will continue that tradition. The game is a little difficult to describe, but here are the basics: Demons invade Japan, you happen to be one of the few that can collect and use them in battle, like Pokémon. On top of the somewhat tried-and-true gameplay, the game employs a dialog system that somewhat resembles the surprisingly deep offerings of a dating sim, except thankfully isn’t a dating sim. It’s a deliciously Japanese JRPG, and if “collect them like Pokémon, but in a deep JRPG” doesn’t convince you it’s worth your time, I don’t know what will.