Editors' Picks 7/13: Why There Are Smooth Mexican Operators | The Mary Sue

Editors’ Picks 7/13: Why There Are Smooth, Mexican Operators

This week in Editors’ Picks: “Smooth Operator,” a chat client theme for chatters with mad swag, yo. Why There Are Mountains, because I am going to force you to like my music if it comes to that, damn it! And Mexicokes, because god knows you shouldn’t be drinking the water.

You just got a new Windows or Mac compter, and you’re looking for something better than Pidgeon. The best multi-protocol messaging client out there right now is Adium for OS X, so that was pretty easy, but your eyes have trouble adjusting to theme of the IM windows. So, you find one you’re sort of okay with, but it doesn’t have the timestamps you like. I’m making this easy for you: Go with the “Smooth Operator” theme, with the “Classic” variant. It bubbles everything nicely in a way where it doesn’t look like goofy chat bubbles, has a soft tone to the coloring, and has the best timestamp-per-message implementation that is both easily visible, but doesn’t get in the way.
“But crap,” you say, as you realize Adium is only available for OS X, “I built a Windows PC because Macs are for art losers and people who don’t like gaming!” Never fear, generalizing angry person, as Digsby on Windows also has the Smooth Operator theme, and on top of that, seems to be the best Windows multi-protocol messaging client available. Seriously, I can’t recommend Smooth Operator enough, it’s extremely easy on the eyes, in both the aesthetically pleasing kind of way and that your eyes will never search — even for a split second — for the information you’re seeking. 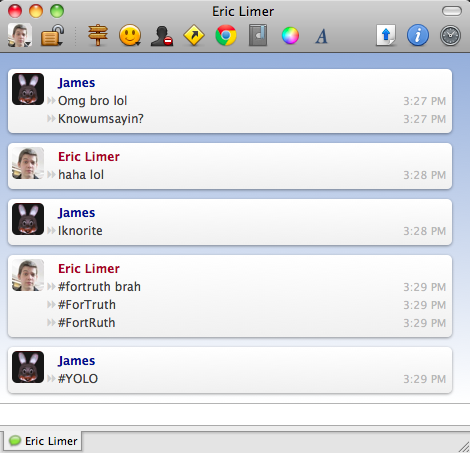 Eric’s pick: Why There Are Mountains

We all have summer music, and one of my favorite jams is Cymbals Eat Guitar’s masterpiece Why There Are Mountains. It’s not like there’s actually anything particularly summery about it really, just that I tend to listen to it in the summer, but that aside, it’s an extremely solid album in its own right.

What’s it sound like? Well, that’s a little bit hard to describe. It definitely seems like there’s some Modest Mouse in there; the singer’s voice is similarly distinctive and similarly not what you might call “good” in a traditional sense. Instrumentation wise, the album’s high points frequently exhibit a sort of “sonic landscape” quality. Don’t get me wrong, this isn’t ambient music. There are plenty of identifiable and catchy melodies, but the overall feel of the guitar is sort of ethereal, there’s just something oceanic about it.

At some points — the best points, in my opinion– the record can get a little bit abrasive, but all of the screaming on the album feels very natural, not like it’s an artifice of a genre, but rather like it’s welling up from actual anguish, or more accurately, frustration. Also the lyrics tend to be 99% indecipherable, which is sort of a shame because if you look them up they can be surprisingly poetic.

But enough of me trying to use my mouthwords to explain these earsounds. Take a listen for yourselves.

A not-so-secret fact is that the unique economics of Mexico give rise to some seemingly anachronistic products. For instance, the original Volkswagen Beetle was manufactured and sold for decades after it had been pure from every other market. Sadly, this ended in 2003. However, in deference to economic forces beyond my understanding, the Coca-Cola company has continued to produce its trademark beverage as God intended it: With sugar, not corn syrup.

It’s hard to put my finger on the difference. I’d also be hard-pressed to say that it wasn’t entirely psychosomatic. But Coca-Cola from Mexico has a crisper taste, without a lingering sickly sweetness that coats the mouth. I’ve been lucky enough to have a constant supply of the stuff for two years, thanks to the Astoria Costco. If you can get your hands on this “hecho en Mexico” beverage, I can’t recommend it enough.