Editors' Picks 6/22: Daytrippin' in the Dwarfroom | The Mary Sue

Editors’ Picks 6/22: Daytrippin’ in the Dwarfroom

This week in Editors’ Picks: The Newsroom, a veritable blanket of Sorkinisms to keep you warm at night. Dwarf Fortress, because after the end of a long work day YOU deserve a turn to be the one in charge of an oppressive bureaucracy. And Daytripper, watch the many deaths of a single character, one after another. It’s not as dark as it sounds.

The Newsroom, Aaron Sorkin’s new show, premieres this Sunday on HBO at 10 PM EST. For those who know Sorkin, all you need to know is that it’s a cross between Sports Night and West Wing. That’s enough information to help you make your decision to watch it or not. For those who don’t know Sorkin, his shows involve fast-paced, clever dialogue revolving around generally intelligent concepts. The Newsroom is about about the people who work in the titular newsroom for a nightly news show called News Night, trying to shape and deliver a respectful, important newscast, rather than chase ratings. With Sorkin, you’ll normally either love it or hate it, so it’s worth giving it a shot if you can access HBO. Check out my longer review of the first two episodes of the season here.

Sure, everybody knows Minecraft, the indie darling sandbox where you can do anything blah blah blah. What if I told you Minecraft had an evil twin brother, an evil, demented, punishingly hard, insanely rewarding brother. It does, and it’s called Dwarf Fortress. Or more accurately Slaves To Armok: God Of Blood, Chapter II: Dwarf Fortress. It’s better than it sounds, I promise. For the uninitiated, Dwarf Fortress is an insanely sophisticated Dwarf Fortress simulator. The game drops you in a procedurally generated wilderness with seven dwarves you do not directly control, but rather assign orders to. You then build a fort and mine and make goods to trade with the filthy elves and make a bigger fort and mine some more and burrow into the very depths of hell, if you want. The possibilities are practically endless.

There are a few things you should know, though. First, it has ASCII graphics and is incomprehensible at first, unless you get a tileset, which is still pretty incomprehensible. Second, it has a ridiculously steep learning curve, in part because the randomly-generated world is punishing and your dorfs, if depressed for any reason, will often brutally murder their friends and family making other dwarves depressed, and in part because some of the interfaces are almost preposterously unusable and a slew of third party programs are practically required. That aside, the haphazard nature of the game (programmed by a single fellow, now and forever, I might add) opens it up to the most wonderful of insanities if you can tame the wild beast it is. Dwarves have been known to carry infants into battle to use as sheilds, engrave statues with recursive images of the statues themselves, or walk around with their organs dragging behind them thanks to a wonderfully janky combat system that models not only limbs, but veins, skin, and organs in amazingly unlikely ways. TVTropes can more accurately chronicle its allure.

You may find yourself wanting to play Dwarf Fortress, and you may download it, but know full well that you will instantly want to give up. Do not give up my friends. Soldier on, for the reward that awaits at the end of your trials is greater than you can possibly imagine. And remember, losing is fun!

I am a notoriously slow reader, and despite my deep and abiding love for the art of Fábio Moon and Gabriel Bá, I only just finished their masterful series Daytripper this past Tuesday. It was released over a year ago.

For the unaware, Moon and Bá are Brazilian artists with unique but eminently complimentary styles. You’ve likely seen their work together on the fantastic Cassanova series by Matt Fraction, their “1946” and “1947” story lines for BPRD and Bá’s solo work on Umbrella Academy. Daytripper, however, was the first time these twins wrote and drew their own work.

And it’s stunning. The story is focused on the life of a single character, and in this way is fantastically small in its scope. Yet, the larger themes of life and death are so intrinsic to the work that it is simultaneously the biggest story of all.

In every issue, Bá and Moon chose to kill their main character at a different point in his life. It’s sort of like looking at all the possibilities a single life can have; parallel universes all running at once. What’s most surprising is that this trick not only works, but is extremely compelling.

I’ll skip over saying that the art is gorgeous, because these two never disappoint. I will, however, insist that you go find it. It’s a beautiful, moving book and one of the most interesting titles I’ve seen come from a major comic book company. It is well worth your time. 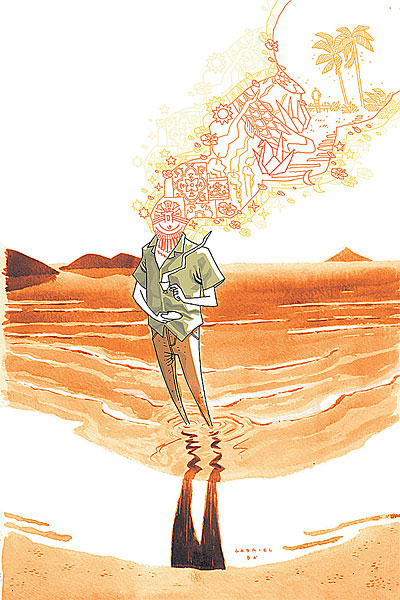