Editors’ Picks 6/15: Double Your Fun With Interns, Monitors, and Mandals

This week in Editors’ Picks: Interns, in the 21st century, our slave-labor is college educated! Second monitors, because two is better than one! At least when you’re talking about monitors and not “massive piles of work I have to get done by the end of the day or some is going to yell at me oh god oh god oh god!” And sandals: Because Max doesn’t care if his feet look cool; he’s too cool for that!

For those paying attention to the author bylines on Geekosystem, you might have noticed a few new ones this week: Ted Johnson and Sui Ying Teoh. These lovely folks are our new summer interns, and boy, I recommend every one of you get yourself an intern or two — you know, just to do whatever. We generally have these bright-eyed, lucky folks write posts for the site, but that won’t stop us from making them go buy a microphone and a stand in the middle of the day. Just ask Eric. If you act like they’re gaining valuable life experience, they’ll probably actually think they are, and thus will! It’s a win-win for everyone, but more so for you, because you just got some interns to do stuff you don’t want to do.

In the interest of not having to lug my laptop from home to work and back again every day, I decided I could leave my old, retired Linux laptop at the office. Problem is, its mouse is awful and its screen is broken. That being the case, I picked up a monitor, intending to use the laptop like an old desktop PC, sitting closed on the desk. Shortly, after the monitor’s arrival though, it occurred to me I could leave the old laptop open on the desk and utilize its still functioning screen. All I had to do was write a little script to disable the built-in, keyboard and mouse then bam, two monitors.

So far, I can tell that this has been an awesome idea, but I can’t tell how awesome because I’ve yet to harness the true power of two screens. It takes some getting used to. That said, when I’m thinking about it and writing a post in one screen while collecting links for it in the other, it’s been absolutely wonderful. Combined with multiple workspaces, the possibilities are endless. Having what’s effectively a double wide screen with a hard barrier down the middle has encouraged me to organize my windows and my thoughts for maximum efficiency. Also, it’s just totally badass. I mean, just look at it. 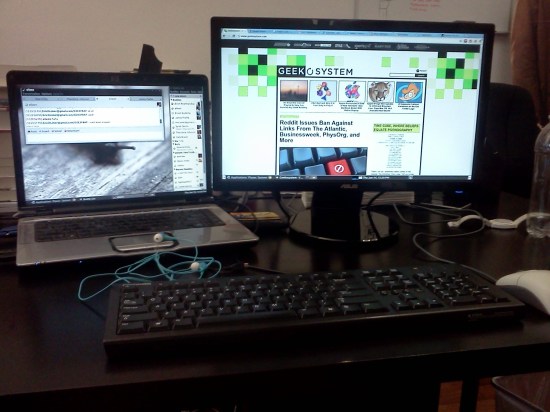 By and large, I dislike shoes. It’s not because I have some kind of weird foot issue that makes wearing shoes physically painful (my feet are flat, not horrifying flippers with claws), but I get incredible anxiety over shoe shopping. I think it stems from being committed to one thing that I will use most days. So when I find footwear that I really like, I tend to stick with it for a long time.

That’s been the case with KEEN’s Daytona sandals. I got my first pair sometime around 2007, and have bought new ones about every two years since. I’m currently on my third pair. As sandals, they are fantastic, tightening all the way down so you get that tight shoe-like fit but with the freedom afforded by not wearing shoes. The soles are thick, and cut with deep treads for added flexibility and surprising grip. They also have some kind of squishy, water resistant fabric underneath the outer leather that feels great and helps with that tight fit. Quite honestly the most comfortable shoes I’ve ever worn — and I usually end up wearing them well into the colder seasons.

The only downside I’ve experienced is that they have a tendancy to wear out in about two years — sometimes less if I’ve been really punishing on the pair. Like all KEEN shoes I’ve owned, they wear out in exactly the same way: Eventually, I just wear through the heel. This might be a peculiarity of how I walk, or maybe their soles are just weird like that. They’re also a bit on the pricy side, but you can frequently find them heavily discounted.

I recognize that this sounds like ad copy, but you really don’t understand how much I love these shoes. In every conversation where it is appropriate to discuss footwear, I sing KEEN’s praises and always direct people toward the Daytonas. If you need sandals, buy them. You won’t regret it. 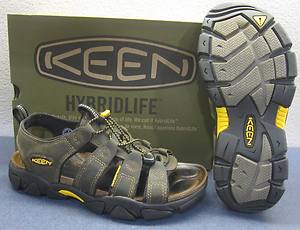