Why we need more Rita Vrataskis. 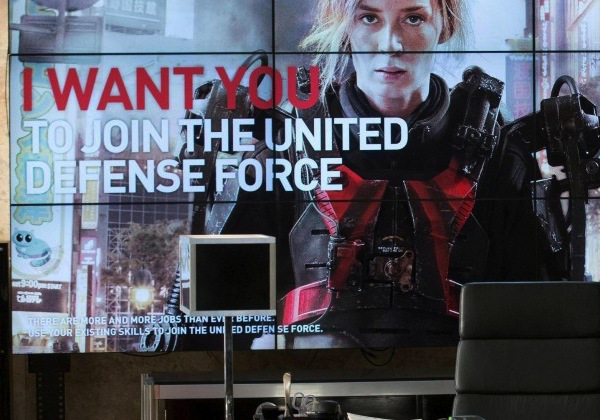 This piece was originally published on Beacon. It was republished here with permission.

“Strong Female Character” carries with it a judgement that I don’t think its users intend. After all, what does “strong” mean? Does it mean physically strong (and so, are we defining strength according to stereotypically male criteria)? Does it mean emotionally strong (and so, does this mean that if a woman cries, falls in love, or protects her children she’s not strong)? Does it mean assertive and ambitious (and so, can more average women not be “strong characters?” And how do we square that with the fact that, with male protagonists, the Hero’s Journey is often defined by his starting out as an ineffectual schlub who grows into leadership. Was he not a “strong character” until the very end)? 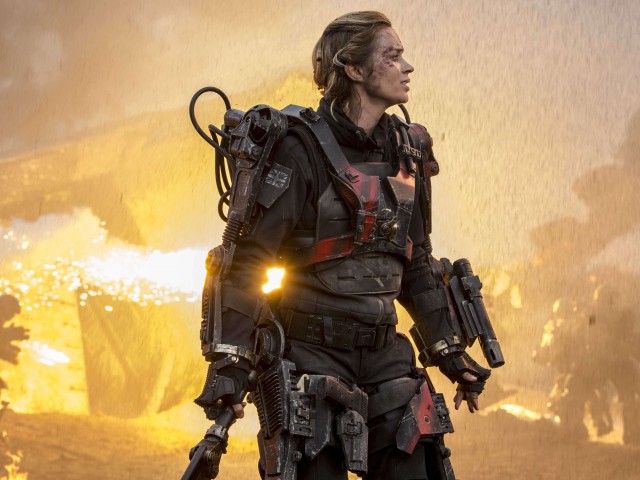 Tasha Robinson wrote a great piece on “Trinity Syndrome” (introducing a “badass” female character in a film only to have her either disappear or become useless/helpless mid-movie so that the protagonist – generally a he – can come into his own. A la Trinity in The Matrix.) that I, sadly, agree with in many places. Especially in the case of Wyldstyle in The Lego Movie (which I couldn’t believe was good. But it WAS). However, the one place where I disagreed with her was her mixed interpretation of Rita Vrataski (played wonderfully by Emily Blunt) in Edge of Tomorrow.

Edge of Tomorrow tells the story of William Cage (Tom Cruise), a PR officer in the US Army who prefers being the talking head on news programs to actually fighting during an alien invasion that has taken over continental Europe. When he is ordered to embed himself in the NATO-led United Defense Force to cover a squad on the front lines in France, he does everything in his power to avoid going to no avail. He finds himself with a ragtag squad about to face the worst danger they’ve ever faced and ends up storming a beach with them despite his utter lack of battle experience.

We’re introduced to Rita Vrataski via military propaganda posters and footage. She is an International Hero for having killed hundreds of aliens (called Mimics) in a major battle at Verdun, France. Known as “The Angel of Verdun” by the press (and colloquially as “Full Metal Bitch”), her image is used to encourage military recruitment, and wherever she goes, awed gasps follow.

Both Rita and Cage are on the beach when the United Defense Force is ambushed by Mimics in France and the battle goes south. 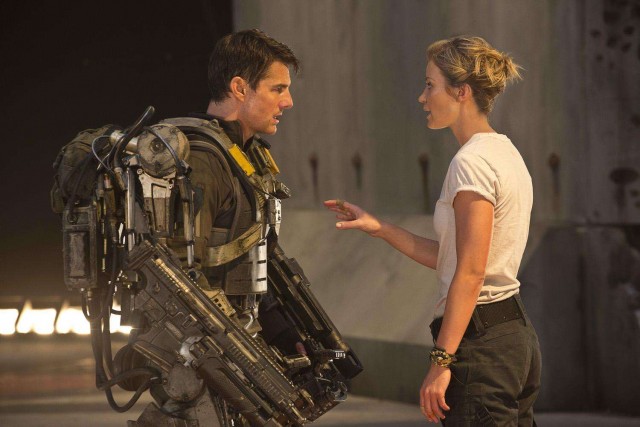 Edge Of Tomorrow features Emily Blunt as Rita, an ultra-tough female character who dies to motivate the male protagonist.(Repeatedly!) She starts off as the biggest bad-ass in her world, but is eventually surpassed by hero William Cage (Tom Cruise), who starts off as a bumbling fuck-up. She mostly exists in the story to provide Cage with information and cheer him on, and eventually validates him with a brief romantic moment.

While she goes on to praise the kind of female character Rita is, I couldn’t help but disagree with the first half of her assessment. To me, Rita Vrataski is exactly the kind of Nuanced Female Character we should encourage in film. 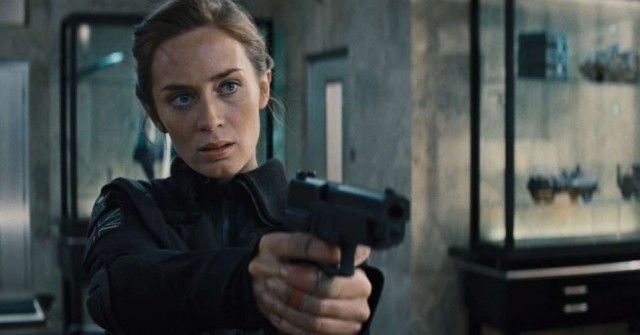 Robinson’s declaration that Rita “dies to motivate the male protagonist” is just untrue. The first time Cage sees her die is when he’s in battle and on the verge of death himself. He recognizes her as the face of the human resistance against the alien invasion and is in awe of her. When she gets killed in front of him, Cage is terrified – if she can die, what hope is there for the rest of them?

Then he is killed, and we are introduced to the film’s central device. For some reason, he starts to live the same day over and over again (many have called this film “Groundhog Day with Aliens”), and watches the battle fail and everyone, including Rita and himself, dying over and over again. Eventually, he saves Rita, because he knows what’s going to happen.

The thing is, Rita recognizes his ability to know what’s going to happen and tells him to come find her again when he “wakes up.” As it turns out, he is not the first person this has happened to. It happened to her first, which is how she killed all those Mimics in Verdun. She had lots and lots of practice.

There is an interesting explanation as to why they received the ability to reset the day (and why Rita subsequently lost her ability), but the point here is that Rita dying isn’t something that exists to motivate Cage. It would’ve happened anyway, whether he was there or not, because they are dealing with a powerful enemy. What’s more, what motivates Cage isn’t watching Rita die. It’s trying to save himself. William Cage is extremely self-centered, which is why he was reluctant to go to the front lines in the first place. He doesn’t go through everything he goes through in the film “for a woman.” He goes through it to save his own hide. Saving Humanity would be a bonus.

Once Rita realizes that Cage has the ability she used to, she trains him and gives him a plan to follow – and he does. He’s basically following her instructions the entire film. Yes, he gets better and better in battle the more times he experiences the day – but he never surpasses her. He has to work to get up to her level.

Yes, Rita inspires him. But she inspires the whole world, and with good reason. He’s not trying to win her approval, or win her romantically, or even protect her. She inspires him, because she’s the kind of person he wants to be, which is extremely rare in film. It’s rare that we see a male character (several, in fact) in a film look up to a female character; want to be her. 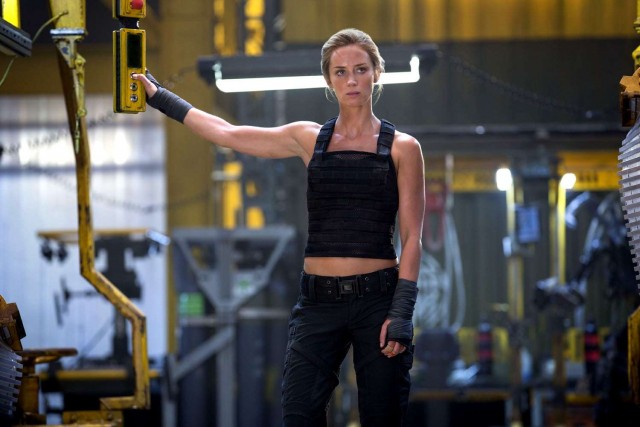 And what motivates her to fight?

First, “[she’s] a soldier.” This is how she identifies. Even before she became The Angel of Verdun, she was a soldier. Defending her home and her people is what she does, and what she would have done whether she were affected by an alien life form or not.

Secondly, there’s the pain of having watched someone special to her die over and over. It’s someone with a male name (that I sadly can’t remember), but there’s no indication as to whether this male person she watched die over and over again was a lover, a son, her brother, or a friend. She refuses to talk about it, as is common among soldiers who’ve seen war. We, therefore, aren’t allowed to reduce her motivation to something as simple or cliche as “being motivated by the loss of a man she loved” because we don’t know the nature of the relationship or who that male character was. We just know that he mattered to her, and that he’s dead. (In the original source material, the Japanese novel, All You Need Is Kill, she’s motivated by the death of her parents at the hands of Mimics)

Cage is uncomplicated by comparison. He has no beliefs other than “I don’t wanna die!” His journey is fascinating because he becomes better than this by the end, but Rita is fascinating because she remains an example for him to follow throughout. He spends the film trying to be as good as she is, and just barely makes it. Hell, he only makes it at all because of a decision of hers that she insists on in their final battle with the Mimics, and she insists on it, because she’s a better soldier and would be better-equipped to do the riskier thing.

She’s more than just the catalyst for an info-dump or the source of Cage feeling good about himself. Despite her having lost the resetting ability Cage has, she’s the main reason they survive and defeat their foes. In fact, she proves herself powerful, because she’s running the show without “magic powers.” It’s just her and her competence. Yet, remove her, and Cage is nothing. The story is nothing.

They need to be a team. 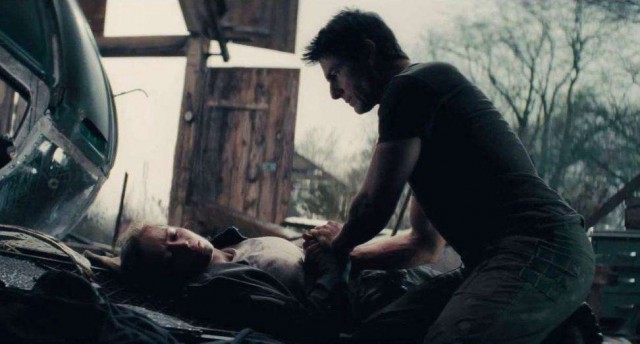 And listen, they’re both really attractive people. It’s no wonder that there’s a bit of sexual tension between them throughout. If you were fighting aliens with a hot person, you might want to stop and jump their bones, too. The thing is – THEY DON’T. They were battle partners throughout countless time loops, and not once did they entertain that. There was too much at stake. There was both mutual attraction, and mutual focus on the task at hand.

There was balance and respect throughout. They were a good team, because the difference in their genders was rarely, if ever, an issue. Whenever there were differences, they were differences in competence or experience. Any sexual attraction went unremarked upon, and was never something that weakened either character. And even the one time she finally does kiss Cage, it’s only because she thinks they’re both going to die. It’s brief and almost business-like.

Men and women can be friends and work partners without having sex? CRAZY! 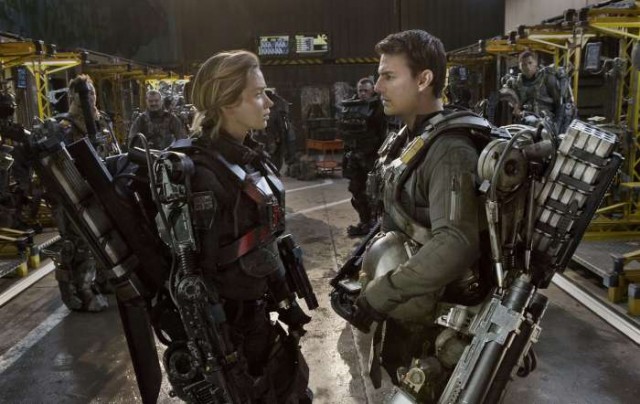 This is not to say that Rita is perfect, but her flaws are not circumscribed by gender stereotypes. She, more than Cage, has trouble being vulnerable, even in moments when vulnerability would be appropriate and needed. She’s stubborn, and sometimes “does what she wants” to her own detriment. For example, at one point in the film she and and Cage come across a farmhouse in a field. There’s a helicopter in the field, and she’s determined to fly to their next destination rather than walk. Even when Cage confesses that they’ve been through this day many times, and there’s no version where she takes the helicopter and lives, she insists that he give her the keys he’s hidden so that she can try. She, of course, dies. Again.

Even when she dies pointlessly, it’s her choice.

And ultimately, this is why Rita Vratasky is such a great example of a solidly-written female character. She is multi-faceted, and neither her strengths nor her flaws have anything to do with gender. She’s just a person who’s good at her job. Whether as a poster girl, in combat, or on the road, she makes her own decisions, has her own motivations, and helps the protagonist without compromising herself. Most importantly, she’s never reduced to eye candy or a prize to be won.

Oh, and she can hold herself up completely parallel to the ground on one hand, which had me like WHAAAAAAAAAT?! Yeah, that too.

If you haven’t yet seen Edge of Tomorrow (which is totally understandable, as it was marketed horribly), check it out if you can. Quality sci-fi films and Nuanced Female Characters like this need your support so that Hollywood knows to MAKE MORE.