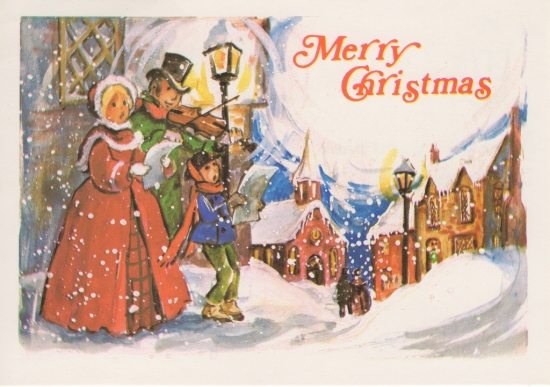 Recently discovered wax cylinders have been shown to contain what could be the earliest audio recordings of Christmas in the world. The Museum of London discovered 24 wax cylinders dating back to 1902 that contain a British family’s home phonograph recordings taken at Christmas. The recordings are considered incredibly rare because wax cylinders are fragile. They are made of wax after all, and as such they don’t store very well. Finding them over one hundred years later in playable condition is a Christmas miracle of science.

The recordings were made by the Wall family of New Southgate and Friern Barnet in north London on a phonograph during holiday celebrations. The recordings include the family singing carols, wishing each other holiday greetings, and laughing at the novelty of the new technology. One record was even made by taking the phonograph out in a baby stroller to record the church bells ringing in the New Year back in 1904.

The cylinders and the phonograph on which they were recorded were donated to the Museum of London back in 2008 by David Brown, the grandson of Cromwell Wall who made the recordings. It wasn’t until the cylinders were converted to a digital format that the museum realized they were Christmas recordings. Another benefit of the digitization process is that the museum has made all 24 recordings available on their website.

Julia Hoffbrand, the Curator of Social and Working History at the Museum of London, said, “On hearing some of the musical recordings, classical music experts have commented that the sound quality is outstanding — superior to many musical recordings made for sale at the time.” It seems like Cromwell Wall really knew his way around a phonograph.

Take a few minutes out of your holiday season to give a listen to some of these recordings. You’d need a DeLorean or TARDIS to bring you back any closer to 1902 London at Christmas time.

If you think you have an earlier home recording of Christmas, or anything else, contact the Museum of London at [email protected]. They’d love to hear from you.

(Museum of London via Geek.com, image via Else10)