E3 Called Out for Retweeting an Article That Stereotypes Female Gamers 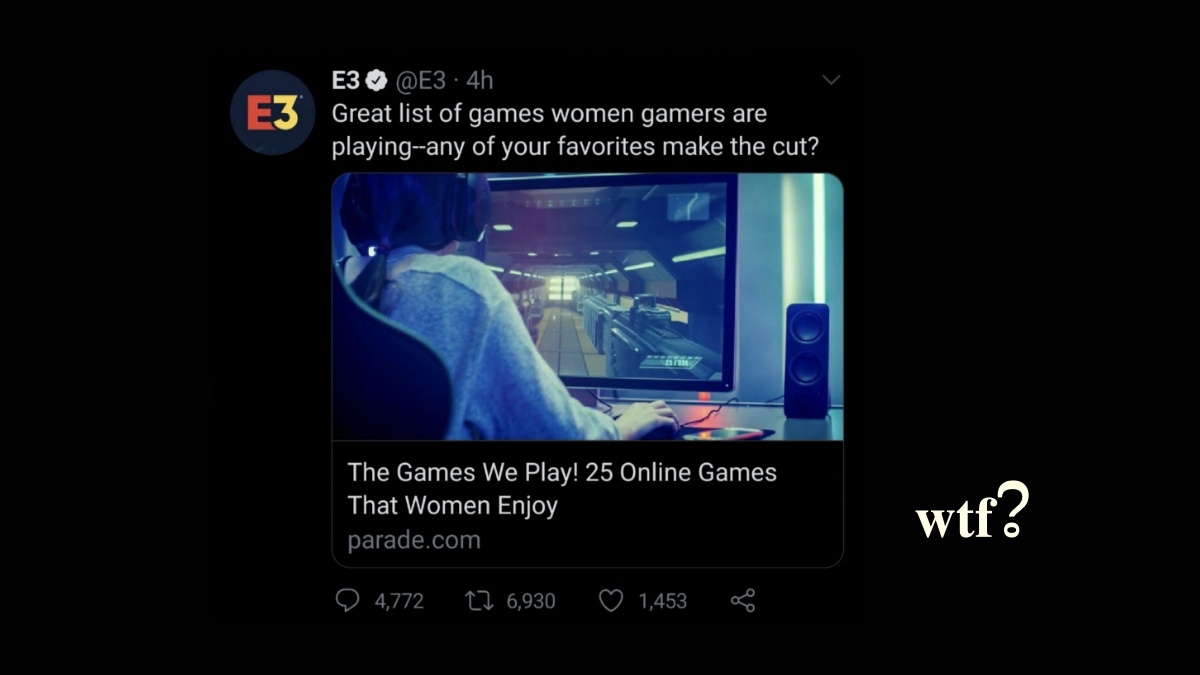 There is nothing wrong with liking or playing any of these games, for the record. However, the list oversimplifies and lumps together the idea of “women gamer” into this idea that ladies only like to play one particular kind of light, fluffy game. It’s a shallow vision of what it means to be a womxn in gaming that highlights that sometimes you need to look beyond the data.

We messed up. We are taking down the post and apologize for perpetuating a harmful stereotype. We will do better.

What a wild list of stereotypes and fucking awful game recommendations. What the hell was E3 thinking when they released this article?! pic.twitter.com/WjjKyT1d7r

It is clear that whatever criteria they used to judge “games that women enjoy,” they weren’t separating between casual gamers, hardcore gamers, and people who just play games sometimes.

I would honestly consider myself a casual gamer in the sense that I am very much invested in the gaming community, I genuinely enjoy video games, and I get excited when new releases come out. However, when it comes to the games I play, they tend to be fighting games, J/RPGs, and the occasional big-name game that people in the industry are excited about. I also don’t care about competing with other people; I like just the solitary act of beating people up in Mortal Kombat, grinding through a JRPG, or the latest Pokémon installment more than unlocking trophies.

What is more frustrating is the hierarchy that validates the dude who only plays sports games like Madden versus the people—mostly women, according to data—who spend hundreds of hours on Animal Crossing. It doesn’t matter to me because I know plenty of women who will switch between Animal Crossing and Doom within the hour, but there is no denying that one gets you more clout in the way we perceive “gamers.”

I’m sure the fact that something like Kim Kardashian: Hollywood Adventure made it onto the list is because it was something anyone could play on the train, or during a commute. When I used to go on the subway, I’d see people of all ages and gender identities playing things like Candy Crush because it was there. Also, it’s fun. Those people, regardless of their gender identity, aren’t the majority of people who are thirstily saving their money for the new gaming system or running to the store to preorder games.

Gamers, in general, are not just one thing, and trying to constantly reduce the involvement womxn have in this industry is gross. But also, stop crapping on fluff. Fluffy games are a part of the world now, and the reality is that I put Madden, Fifa, etc. and Candy Crush on the same level, and I certainly wouldn’t call a guy who played those less of a gamer. So why I am one because I would rather play Octopath Traveler than Tomb Raider? (JK I play both, baby!)