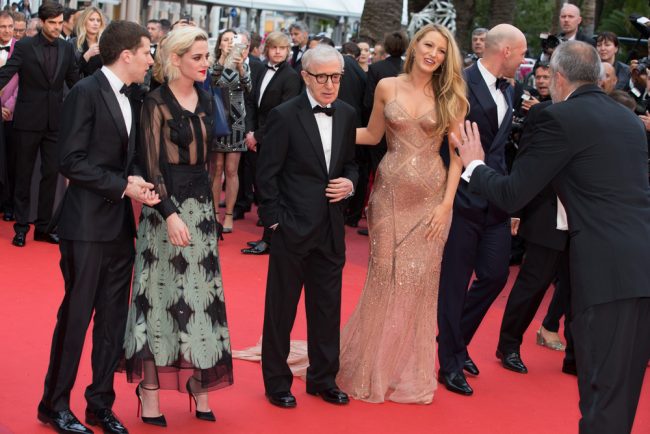 This photo was taken in 2016. Dylan Farrow’s open letter about her abuse ran in the New York Times in 2014.

With the recent formation of the Time’s Up initiative, Hollywood’s women, and their supporters, have been coming out of the woodwork to express solidarity and support. That is a very good thing. However, Dylan Farrow, daughter of Mia Farrow and survivor of alleged sexual abuse by her father, director Woody Allen, wants these women to acknowledge the ways in which they’ve supported abusers and allowed them to thrive.

I’m honored to be a part of this movement. The time is NOW! Go to https://t.co/hQCImjRuiI if you need legal support or if you want to donate ANY amount you can. #TIMESUP pic.twitter.com/Tuf9ZMslp8

To which Farrow replied:

You worked with my abuser, @blakelively. Am I a woman who matters too?

When talking about this with regard to women, I always feel conflicted. I, personally, would never feel comfortable working with someone I knew had allegations of abuse or assault against them. However, I go back and forth on how I feel about women who choose differently. There are days when I get angry, and frustrated, and wonder how the hell a woman could throw other women under the bus for her own career opportunities. There are days when I see this as the worst kind of complicity. Complicity from the oppressed themselves always feels worse.

However, on other days, it makes me sad as I think about the fact that every woman, no matter how powerful, is oppressed in this system. Yes, of course, some women are more oppressed than others, and ideally, they should use any privilege they have to act on behalf of those who don’t. But I understand fear. And I understand that under oppression, it’s difficult to be brave while you’re also trying to protect yourself and survive.

I expressed as much in a Twitter conversation last month with Lexi Alexander, when she was tweeting about the topic of women, women of color, and complicity:

I agree. It’s especially infuriating when women support abusers. Like Kate Winslet, for instance, who not only worked w/Woody Allen, but continues to talk him up & refuses to engage w/the difficult abuse topic. However, I can’t help but see women doing it a little differently–

Take “The Handmaid’s Tale,” for instance. The Wives oppress the Handmaids and the Marthas, but they remain oppressed. They are surviving the oppressive system as best they can. Would it be BETTER if they all joined forces and rose up? Of course–

–but I guess it’s hard for me to hold a woman’s survival instinct against her the same way I would hold a man’s power against him. I don’t know. I’m angry, and sad, and not just a little afraid. And I will call out women’s actions, but I have a hard time turning away from them.

I stand with Dylan Farrow. I’d say I was boycotting Woody Allen’s films, but I’ve never been a fan of his films anyway, so a “boycott” would be pointless. And Farrow is ensuring that we continue having a very important conversation:

Where do we, as women, draw our moral lines? How can we protect, stand up for, and be of better service to each other? And how can we all find the strength and the bravery to put the needs of the many before the needs of the few?

Look, I’m a Trekkie, okay? I filter just about everything through Trek. Leave me alone.