If You Were Planning on Being an Abusive, Sexist Predator in Hollywood, Its Women Say #TIMESUP 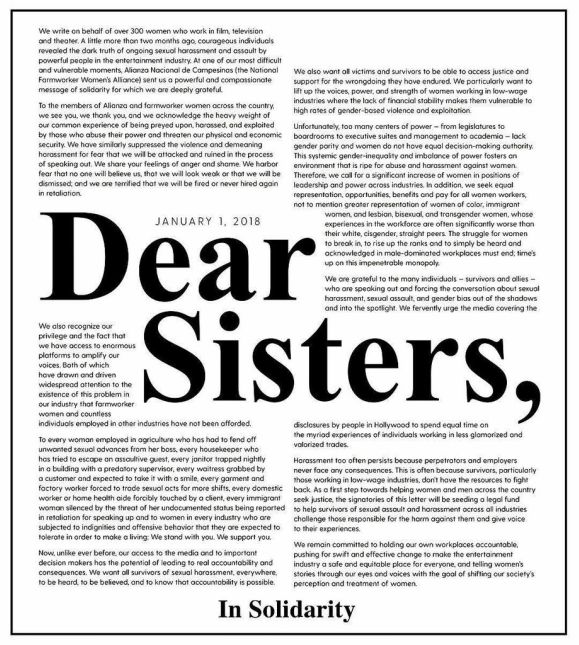 The end of 2017 was all about expressing solidarity and speaking truth to power in the realm of Hollywood sexism and abuse. 2018 is all about taking action. You thought there was a reckoning before? It’s only just started. For those who would abuse, prey on, or otherwise demean or diminish women in any industry: time’s up.

This action has actually been developing behind-the-scenes as women in Hollywood started joining forces to discuss “what’s next” shortly after The New York Times’ expose on Harvey Weinstein back in October. What’s heartening is that this effort by powerful women in Hollywood was spurred by, and is working to help, the women of the Alianza Nacional de Campesinas (The National Alliance of Farmworker Women) as well as women in other industries that might not be “glamorous,” but that are nonetheless rife with sexual harassment, sexual assault, and gender-based abuse.

It all starts with the Time’s Up initiative, which was launched by an open letter in The New York Times signed by 300 prominent women in Hollywood—actresses, producers, executives, and agents—“on behalf of [over 1,000] women who work in film, television, and theater.” They wrote this letter in response to the open letter the Alianza Nacional de Campesinas released back in November, expressing solidarity with them as Hollywood was first being rocked by their Weinstein “watershed moment.”

In the Time’s Up open letter, Hollywood’s women talk about the fact that they joined forces not only to help women in Hollywood, but to help and stand in solidarity with women in all industries who have had to deal with sexual harassment, sexual assault, and other abuses in the workplace. Here’s an excerpt:

“Now, unlike ever before, our access to the media and to important decision makers has the potential of leading to real accountability and consequences. We want all survivors of sexual harassment, everywhere, to be heard, to be believed, and to know that accountability is possible. We also want all victims and survivors to be able to access justice and support for the wrongdoing they have endured. We particularly want to lift up the voices, power, and strength of women working in low-wage industries where the lack of financial stability makes them vulnerable to high rates of gender-based violence and exploitation.

Unfortunately, too many centers of power – from legislatures to boardrooms to executive suites and management to academia – lack gender parity and women do not have equal decision-making authority. This systemic gender-inequality and imbalance of power fosters an environment that is ripe for abuse and harassment against women. Therefore, we call for a significant increase of women in positions of leadership and power across industries. In addition, we seek equal representation, opportunities, benefits and pay for all women workers, not to mention greater representation of women of color, immigrant women, and lesbian, bisexual, and transgender women, whose experiences in the workforce are often significantly worse than their white, cisgender, straight peers. The struggle for women to break in, to rise up the ranks and to simply be heard and acknowledged in male-dominated workplaces must end; time’s up on this impenetrable monopoly.”

The Time’s Up initiative is leaderless, volunteer-run, and made up of several working groups, each with a focus on tackling a different area of the problem.

Anita Hill, whose trailblazing we’ve talked about before, is heading up the Commission on Sexual Harassment and Advancing Equality in the Workplace, which was spearheaded by Lucasfilm’s Kathleen Kennedy and includes co-chair of the Nike Foundation, Maria Eitel, power attorney Nina Shaw, and venture capitalist Freada Kapor Klein. This group, which seems to be working more from a legislative perspective, is tasked with creating best practices and putting together a blueprint toward fighting and eliminating sexual harassment in the entertainment industry that might then be able to be applied elsewhere.

One of their specific goals is working toward “legislation to penalize companies that tolerate persistent harassment, and to discourage the use of nondisclosure agreements to silence victims.”

Another group is 50/50 by 2020, which is working on creating an environment free of sexual harassment by increasing female participation at the leadership tiers in the entertainment industry with an intersectional approach. This working group, which includes powerhouse producer Shonda Rhimes, has already created a partner in A-list agency ICM Partners, which represents some of Hollywood’s top talent. Managing director Chris Silbermann has pledged the agency’s commitment to creating gender parity at their company, and others are sure to follow.

Still another working group within the initiative is one that specifically focuses on the needs of women of color, disabled women, and the LGBTQIA community. One member of this group is Master of None‘s (and showrunner of the upcoming Showtime show, The Chi) Lena Waithe, who says that she’s gotten involved because “No one wants to look back and say they stood at the sidelines.”

One of the most wide-reaching and ambitious elements of the Time’s Up initiative would have to be its legal defense fund, which has been backed by $13 million in donations (you can donate, too!) “to help less privileged women — like janitors, nurses and workers at farms, factories, restaurants and hotels — protect themselves from sexual misconduct and the fallout from reporting it.” This is key, as too often it is economic factors and fear of retaliation from their workplace that keeps women from coming forward when they are harassed or assaulted.

And yes, the whole wearing black during awards season thing is part of this. While it might seem like a superficial effort, we should remember that Hollywood makes its money in large part on superficial trappings, and this is a way for its women to subvert that, while also ensuring that the issue of sexual harassment remains at the forefront of the viewing audience’s minds.

Eva Longoria, who is also a member of the Time’s Up initiative, explains, “This is a moment of solidarity, not a fashion moment. For years, we’ve sold these awards shows as women, with our gowns and colors and our beautiful faces and our glamour. This time the industry can’t expect us to go up and twirl around. That’s not what this moment is about.”

Personally, I hope these women go full Wednesday Addams and don’t wear make-up and have the most prim, basic hairstyles imaginable. I want to see a red carpet swarming with the widows of a dead Hollywood. Widows who are ready to move on with their lives and create something new.

TMS stands with the women of the entertainment industry, and women across all industries, in their efforts to create concrete, systemic change. Let’s build a better world.