There and Back Again: Evidence of Reverse Evolution Seen in Dust Mites 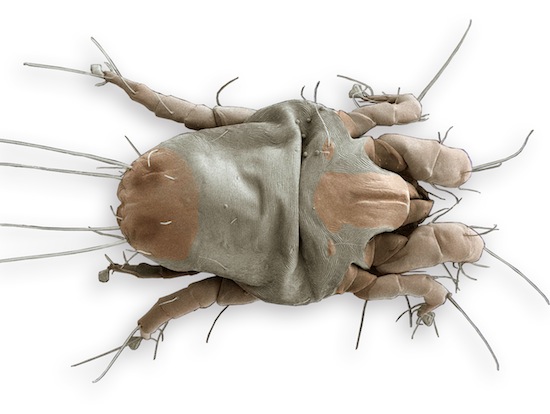 It’s commonly held — but not universally accepted  — that evolution is a one-way street. Researchers who deny the idea that evolutionary traffic can only move forward saw their  arguments bolstered this week with the publication of a study suggesting that house dust mites may have evolved from free-living creatures into full-time parasites, only to abandon that evolutionary track and go back the way they came, reverting to the free-living creatures that live invisibly in your carpet, bed, and other places in your home that it’s probably best not to think about them living.

Evolutionary traffic, it’s said, only moves forward to new forms, not back to old ones. It’s a concept so accepted that it’s known as Dollo’s law for the 19th-century French paleontologist who first proposed it. Some researchers, though, think that law may be more of a set of guidelines — commonly applicable, certainly, but not without exceptions. According to a study published this week in the journal Systematic Biology, the humble dust mite may be one of those exceptions.

The authors of the study, University of Michigan biologists Pavel Klimov and Barry O’Connor, wanted to finally get a handle on the evolution of the house dust mite, a tiny arachnid that co-habitates with humans pretty much wherever they live and is thought to be among the primary causes of household allergies. Despite how common they are, the evolution of dust mites is only poorly understood, meaning that O’Connor and Klimov had to run through no less than 62 existing hypotheses on the evolutionary development of house dust mites. Some of these hypotheses argue for a parasitic beginning to the mite’s evolutionary story, while others hold that the creatures have always been free-living.

Using DNA sequencing and genetic analysis of hundreds of different mite species to create a phylogenetic tree — a sort of evolutionary map — of the mite’s development, Klimov and O’Connor found evidence that today’s free-living dust mites evolved from parasitic mites that lived on their hosts full time. Those mites, though, evolved first from the earliest mites, which likely developed in bird nests but were not parasites.

How is it possible that today’s mites abandoned their parasitic heritage and returned to their orignal roaming ways? It turns out it was just an easier way to make a living. As they moved inside to live among humans and domestic animals, the mites’ powerful digestive enzymes allowed them to live on a diet of skin and hair flakes from any creature. Becoming a free-ranging generalist became more and more attractive for the critters, and over time, house mites followed their evolutionary river back to its source, returning to a non-parasitic lifestyle in your clothing, towels and sheets, while also raising some interesting questions about how evolution works. Is the process really a one-way street? Or could we have a whole new conceit for the inevitable next reboot of the Planet of the Apes franchise?

(via University of Michigan)