The Dumb and Dumber Sequel Is Really Happening | The Mary Sue 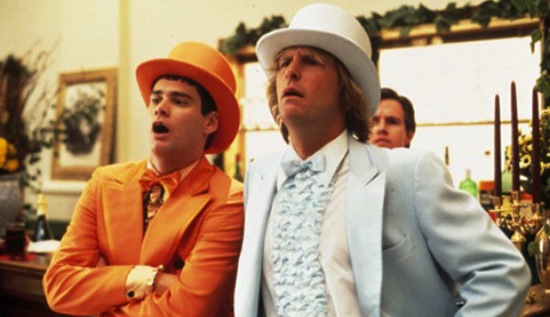 Hey, want to hear the most amazing announcement in the world? A real, live sequel to Dumb and Dumber is officially going to happen. No, not some uninvited “prequel” with people who have no business being in a Dumb and Dumber movie. (Except maybe Cheri Oteri.) But an actual follow-up with the original actors playing the original parts, taking place the correct amount of years since we first met them, returning to the moviegoing public like the salmon of Capistrano.

Peter Farrelly, who wrote and directed the 1994 original with his brother Bobby Farrelly (as well as Bennett Yellin, also a writer), made the announcement that production was set to start as early as this September. But the real news is not only is it not like Ghostbusters 3, where they have some people interested in it while some people are not (don’t get me started, said the lady comedian from the ’80s with the large shoulder pads standing next to the brick wall). Everyone is on board, save for love interest Lauren Holly, but really, who cares? They can find someone so much cooler for Lloyd Christmas to chase across the country and ruin/rescue everything about everything. Peter Farrelly confirmed this part of the deal, saying that Jim Carrey specifically said he’d like to do a sequel, as well as his partner in crime, Jeff Daniels. Farrelly also addressed the much-maligned prequel, Dumb and Dumberer, which he emphasized had nothing to do with them.

And then they all looked at each other and said, “I desperately want to make love to a schoolboy!” and started making a sequel to Dumb and Dumber.

The only thing about which I’m only limited to being cautiously optimistic is the screenplay. When I tell you that my friend Pete and I kind of avoid watching this movie together because 1. we’ll explode and 2. we will probably quote it, out loud, for the entire duration of the movie, I am not exaggerating. We could perform it for you right now. And we still quote it. This script was a Greco-Roman feast of quotable lines, thanks to the work of Yellin and the Farrelly brothers, plus some ad-libbing on the part of the cast including Carrey and Daniels. (Let’s not forget Karen Duffy, Mike Starr, Teri Garr, Charles Rocket, and Harland Williams. Sadly, Rocket died in 2005.) The sequel will be written by Sean Anders and John Morris, another duo who are responsible for Hot Tub Time Machine and She’s Out of My League. Okay, I know plenty of people on Team Time Machine, so I won’t be mean and just write them off. But it will be different. But if the Farrellys are trusting them with Dumb and Dumber, I’ll defer to them.

This is such awesome news that I might just see the Farrellys’ current flick, The Three Stooges. No, really. I might. I’ve been made so happy, you guys.

By the way, here is Dumb and Dumber, edited in the style of Inception, since you asked.