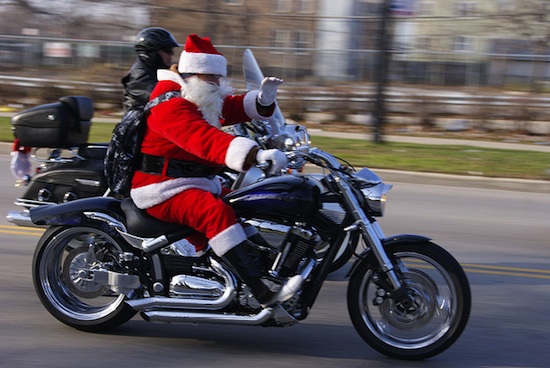 A 24-year-old Canadian man has been arrested after walking along the route of Kingston, Ontario’s Santa Claus Day Parade telling children that there was no such thing as Santa Claus. Unsurprisingly, the man — who police described as “having his hair formed to look like horns that were protruding from his head” — was drunk, and also in violation of his probation, which is still no good excuse for being a jagweed of this caliber.

While we totally understand that the Christmas season can bring out the drinker in all of us, telling kids there is no Santa Claus is just a jerk move — and pretty futile at a Santa Claus parade? After all, there are literally dozens of Santas walking around, and who are you going to listen to — them, or a hammered dude sporting the world’s worst haircut?

This drunken outburst is not at all in the spirit of the holiday, either, as unfocused, free-floating rage has no place in a Christmas celebration. It’s a well-known fact that all holiday rage should be honed like fine blade, forged over a fire of childhood disappointments, sharpened on a whetstone of long-forgotten slights, and directed at the nearest available family member, beloved pet, or television playing Frank Capra’s classic It’s a Wonderful Life. Anything else just demonstrates a lack of discipline that we frankly have no patience for.

We’d say we hope this guy — who was charged with public intoxication and creating a public disturbance —  gets a lump of coal in his stocking, except that we’re worried that might have a different meaning in jail that we seriously wouldn’t wish on anyone.