No Can Do Ladies, Dr. Pepper Ten Is For Men 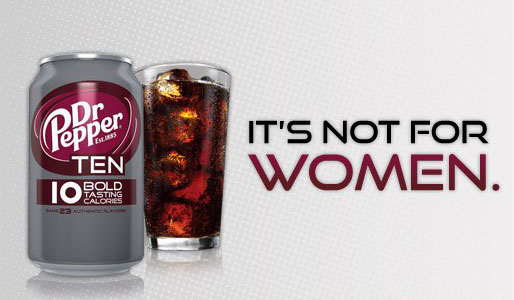 “The soft drink was developed after the company’s research found that men shy away from diet drinks that aren’t perceived as ‘manly’ enough,” according to the Associated Press. “It has calories and sugar unlike its diet counterpart. Instead of the dainty tan bubbles on the diet can, Ten will be wrapped in gunmetal grey packaging with silver bullets. And while Diet Dr Pepper’s marketing is women-friendly, the ad campaign for Ten goes out of its way to eschew women.”

Ready for the commercial?

I’ll wait while you chew your fist off in frustration.

“So you can keep the romantic comedies and lady drinks. We’re good.” Seriously?

But wait, there’s more. According to the AP, “A Facebook page for the drink contains an application that allows it to exclude women from viewing content, which includes games and videos aimed at being ‘manly.’ For instance, there’s a shooting gallery where you shoot things like high heels and lipstick.”

Marketing for men and women separately, I get that, but telling women THIS PRODUCT IS NOT FOR YOU and being discriminatory in their online content is completely abhorrent. Even Secret said their deodorant was strong enough for a man, but made for a woman. EDIT: It’s been brought to my attention this type of thing was done before, with the Yorkie chocolate bar.

“Jim Trebilcock, executive vice president of marketing for Dr. Pepper, said he’s not worried that they’ll be offended by the campaign. The drink and marketing were tested in six different markets across the country before being rolled out nationally, and women weren’t offended, he said. In fact, about 40% of people who have tried the soda so far are women.”

“Women get the joke,” he said. “‘Is this really for men or really for women?’ is a way to start the conversation that can spread and get people engaged in the product.”

Next time Dr. Pepper, just put genitals on all your beverages, that way we’ll know which ones are ok to drink.