Pediatrician Practiced Until She Was 103, Dies At Age 114 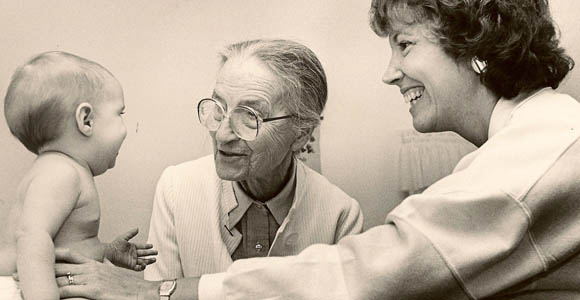 Dr. Leila Daughtry Denmark celebrated her 114 birthday on February 1 of this year. She was an amazing woman who did pioneering work with whooping cough and was still a practicing pediatrician at age 103. That officially made her the oldest doctor in the world to be doing so. Sadly, Denmark passed away over the weekend at her home in Athens, Georgia. Read on for her story.

Can you imagine retiring when you’re 103? Most folks can hardly wait to hit their 65th birthday but Denmark loved her work so much, she continued.

“She earned a bachelor’s degree from Georgia’s Tift College in 1922 and taught high school science before enrolling at the Medical College of Georgia in 1924. She was the only woman in a class of 52 students, according to a National Library of Medicine biography. Four years later, she became the third woman to earn a medical degree from the school,” writes the LA Times. “She began her internship in 1928 in the segregated black wards of Grady Hospital in Atlanta and later that year became the first intern at what is now Children’s Healthcare of Atlanta, according to the New Georgia Encyclopedia.”

Denmark was also the world’s fourth-oldest person when she passed and amazingly, although she worked with children her entire life, she only had one of her own. “The next year opened a private practice in her Atlanta home so she could embody the advice she gave parents: Be the one to raise your child,” writes the LA Times.

The doctor also had the type of personality I imagine (or wish) all little old ladies to have. At the age of 100 she told People magazine, “When a mother asks, ‘Doctor, what makes my baby so bad?'” she was likely to answer, “Go look in the mirror. You get apples off apple trees.”

But Denmark’s most important work had to do with whooping cough. “When an epidemic of whooping cough swept Atlanta in 1932, Denmark did pioneering research on the disease that killed many babies. Working with Eli Lilly and researchers at Emory University, she helped develop a successful vaccine for whooping cough,” write the LA Times. Oddly enough, after all this time, whooping cough is still a problem in the world. Washington State actually has an epidemic on their hands at the moment.

Denmark’s whooping cough work wasn’t her only contribution to the world, however. She published a book in 1971 called Every Child Should Have A Chance and was just plain swell to her patients. “Over the decades, she rarely charged more than $10 for an office visit. She didn’t employ a nurse or receptionist and relied on a sign-in sheet to bring order to her waiting room,” writes the LA Times. “Parents claimed that Denmark only had to look at a child to tell what was wrong.”

“You keep on doing what you do best, as long as you can,” Denmark told the Journal-Constitution. “I enjoyed every minute of it for more than 70 years. If I could live it over again, I’d do exactly the same thing.”