Downing Street's Mouse Catcher May Be Fired | The Mary Sue

Larry Is Playing A Dangerous Game of Cat and Mouse With 10 Downing Street – Yes, Larry Is A Cat 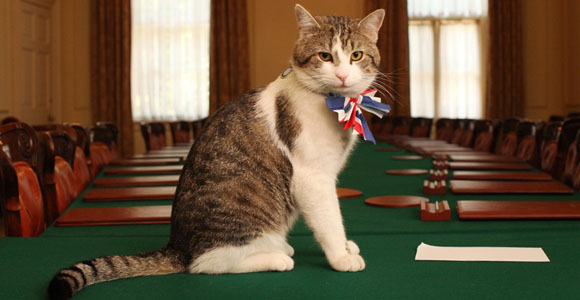 It seems Larry, the official mouse catcher of 10 Downing Street in London, has been cat napping on the job! After a mouse was spotted during a government dinner on site, British Prime Minister David Cameron and others have had to come to the kitty’s aid after some suggested he should be fired. A word of advice to those people: cats have no concept of money and/or work. He’ll manage.

Four-year-old Larry is a rescue cat from the Battersea Dogs and Cats Home, and was chosen for duty thanks in part to his “high chase-drive and hunting instinct” from living on the streets. “Downing Street brought on the 4-year-old Larry last year to help combat a growing rodent problem after TV broadcast cameras caught the image of a ‘large rat’ promenading through the seat of British government,” writes Yahoo. “According to the BBC, Larry is not taxpayer-funded, his expenses were covered by the prime minister’s staff out of their own pockets—at least until a recent fundraising event was held in Larry’s honor.”

As of June, Cameron had told the BBC that Larry had caught three mice but it seems he’s been slacking since then catching only one. When asked if little Larry should resign his coveted position, the PM’s spokesman said, “Larry brings a lot of pleasure to a lot of people.”

But apparently, the Prime Minister resorted to throwing a fork at the mouse spotted during a cabinet dinner last week. “There have been suggestions that Larry spends more of his time asleep or with a lady friend, Maisie, than he does hunting rodents,” wrote the BBC. So, in other words…cat.