Double-Standard Central: Everyone Needs to Stop Freaking Out About This Kristen Stewart Thing

I don’t really need to tell you what’s going on with Kristen Stewart right now. If you have an Internet connection, you know. She cheated on Twilight co-star Robert Pattinson with Rupert Sanders, the married director of Snow White and the Huntsman. The scandal has given birth to a plethora of gossip rag covers, a few awkward TV interviews and speculation on how the final film in the Twilight franchise might be affected by the break-up of its stars.

I don’t want to talk about any of those things.

With everybody—from gossip hubs like Perez Hilton and TMZ to legitimate bastions of entertainment journalism like Variety and The Hollywood Reporter—keeping the public informed about the (possibly career-ruining, if reports can be believed) scandal, what gets me most curious about this whole thing is why people care so much.

Maybe it’s just me, but it seems like this particular scandal is getting a different sort of media attention than those of, say, Tiger Woods and Charlie Sheen, which had more of an air of public entertainment. Hell, Sheen’s particular brand of craziness (which included domestic abuse, lest we forget) landed the man a high-paying TV gig!) With the Stewart scandal, on the other hand, there seems to be a current of THIS IS SRS BSNS running alongside the more typical paparazzi snaps and water cooler gossip.

To wit: A few days ago bloggers jumped on the report that Stewart was being dropped from the upcoming Snow White and the Huntsman sequel, with critics calling out the sexism inherent in firing the actress but not the director who made up the other half of the cheating equation. A valid point… if Stewart was fired as a result of the scandal, of which I’ve not seen any concrete evidence. Even before the scandal broke, Snow White (the character) was not intended to be the lead in the sequel, the focus of which would be on the Huntsman (Chris Hemsworth). Of course, the point was rendered moot a few days later when Universal announced that they’d not yet decided whether they wanted Stewart to return to the franchise or not.

Maybe I’m being hopelessly naïve, but I for one believe them. Not because I think Universal treats its talent with any more dignity and respect than every other studio. You don’t need to look any further than the paucity of good leading roles in studio films for women to see how sexism is woven into the fabric of the film industry. But that’s not what it’s based on.

No, that would be money.

Let’s not mince words: For Universal to come out now and say they’re not bringing Stewart back for the sequel would be stupid. Does anyone honestly think the box office receipts of movie that probably won’t even be out for another two years, if then, will be affected by a scandal that’ll blow over next time Jennifer Aniston has relationship troubles? And yet everyone would assume—everyone is assuming—she’s being canned because of her affair. Even if she’s not being brought back, why mention it? Why speculate about the possible effect of the scandal on Breaking Dawn – Part 2’s box office receipts or how weird, OMG so weird guys, the press junket is going to be? This whole thing is entertainment industry gossip and rumor. It has no deeper meaning. It is not news.

There is absolutely a double-standard here, but it’s not how she’s being treated by the film industry. It’s how she’s being treated by the media. When a male star cheats, it’s almost like it’s expected. XYZ caught with another woman! Which was going to happen eventually, because he’s hot and rich and that’s just what guys do. Ooooh, the scoundrel!

Women make mistakes, too. But most people—men and women—don’t have said mistakes splashed across seemingly endless Us Weekly covers and then dissected ad nauseam by scores of bloggers and entertainment journalists.

C’mon, people. We all know this is ridiculous, right? Let’s just let this scandal die.

Though I have to admit there’s one good thing that came out of it, courtesy of The Avengers’ Clark Gregg. 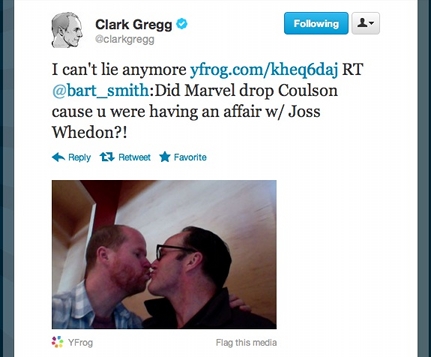