Dorkly Shows Us What Female Gaze Wolverine Looks Like 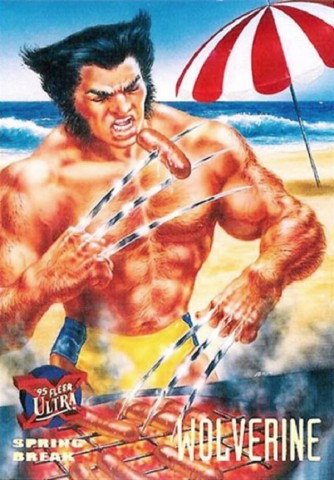 This stunning example of pure artistry appears in Dorkly’s The 5 Most Embarrassing Moments in Wolverine Comic Book History (remember their post on embarrassing Batman/Superman fights, aka that time they had to share a bed?). And sure, there’s some embarrassing stuff in there. (And some skeezy stuff. That Squirrel Girl thing… yeesh.) But I’d like to draw your attention to the following:

For the record, this is what it looks like when you apply the insane female sexualization in superhero comics to males. You can zoom in on anatomically correct mancrotch-shots all you want, but in almost all cases involving male superheroes (including incidental Spider-Man butt), the sexual context just isn’t there. If everything were truly equal, Wolverine would resemble the beefcake above in 90% of comics. He’d never wear a shirt and always have a floppy sausage in his mouth instead of a cigar. And I’d read the shit out of that.

I am profoundly uncomfortable.