Doom Patrol Digs Into Sex and Fear (and Robot Ecstasy) 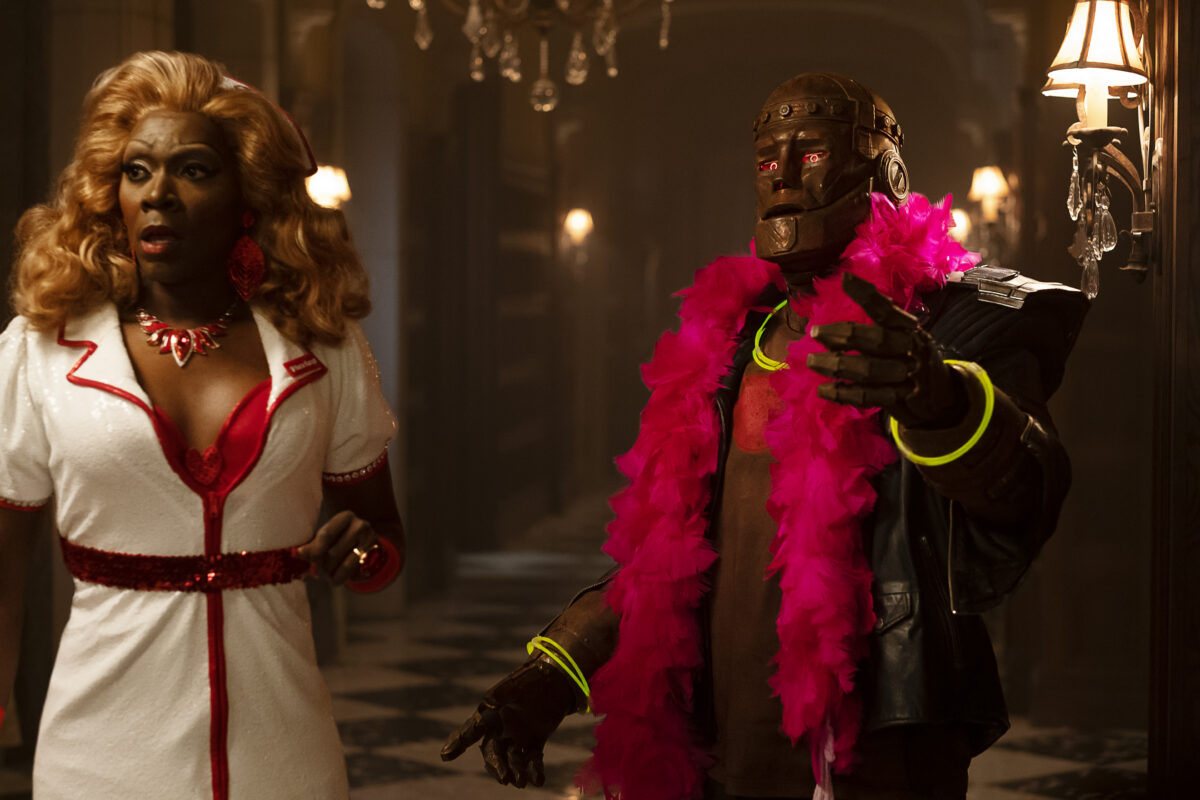 I promise I’ll stop talking about Doom Patrol when it stops being so dang good. However, the second season, now dropping episodes weekly on HBO Max, looks like it will continue to be a bizarre and beautifully humane examination of the human experience, with guests like a sex demon named *checks notes* …  the Shadowy Mr. Evans. Yes. I love this show.

The latest episode of the series, “Sex Patrol,” saw the disheartened members of the Doom Patrol all under one roof, along with the former residents of Danny the Street. Danny is a genderqueer sentient street/pocket dimension, and as you may recall, they were reduced to a brick at the end of season one—a brick who Dorothy Spinner, the too-innocent and too-powerful child of the Chief, broke in the last episode.

The Danny-zens, led by Maura Lee Karupt and Flex Metallo (the hero who can make almost anything happen with the right muscle flex, including orgasms), knew the way to bring Danny back, though: a party expressing all the joy and acceptance that Danny embodied. It was all going swell until Rita asked Flex for some help “clearing her mind” and provoked a sexual event so intense it summoned the Shadowy Mr. Evans, along with a bunch of sex ghosts, and the only ones who could stop him … the SeX Men.

It’s all hilarious and weird, and along the way, Cliff gets a dose of ecstasy (yes, the drug) from the Chief, and Hammerhead has to kill a demon sex baby to save every child in the world, but what the episode is really about is how much sex is intertwined with fear. And how our fear keeps us and others from growth and joy.

For Rita, fear has ruled her life for a long time, and it’s a fear of never being good enough and never facing her real self. And that’s all tied up with sex, as we learn in a tragic flashback to how Rita’s mother got her daughter her first part. Rita saw sex as a way to get past her fear, but she wanted just pleasure and no intimacy or vulnerability, and it just led to more problems.

Rita, however, was at least trying to work through some of her trauma and mental blocks, albeit very slowly and with a big dose of denial. Cliff, Larry, and the Chief were all more than happy to avoid the things that scared them. Cliff wanted to get out of his head, but he wasn’t sure where to go. Larry continued to be afraid of himself and his own sexuality, something that is literally radioactive for him, and the Chief continued to try too hard to shelter Dorothy from everything adult.

I’ve talked about that before, when digging into how this season is examining parenting, and the mistakes and traumas parents often saddle their kids with. This episode builds on that, adding in the tangled relationship between sex and fear and how that impacts kids. On the one hand, you don’t want an entirely adult world with no innocence (the world that will happen if the sex demon’s baby cries), but on the other, there is something literally magical about innocence like Dorothy’s that should be protected. But … sheltering her too much will lead to resentment and could unleash bigger problems, and as Jane’s story reinforced, protection shouldn’t mean imprisonment.

Jane, the main personality, spent most of the episode locked up, with various other alters trying their hand at being the “primary,” but they lacked the complexity of Jane, and her willingness to see the good and bad in the world. That’s why, after killing the evil sex baby thing (and yes, I love writing that sentence), Hammerhead and the others relented and did what Niles and the other parents in the show haven’t: let Jane be free and make her own mistakes. It was at least encouraging while everyone else was screwing up.

Vic, in a really wonderful storyline so far this season, has the opposite problem. He’s found someone to share vulnerability and intimacy with: Roni … but she might be a war criminal? And she’s certainly afraid of opening herself up. But at least he’s trying to deal with his trauma and find some joy. Let’s also take a minute to appreciate this amazing conversation between Vic and Maura Lee Karupt.

And that’s what Danny and the Danny-zens learned, too. You can’t find love or joy while hiding, and that to find it, you have to also give it. So, Danny isn’t a street anymore. They won’t be a prison for Dorothy, and they and the Danny-zens will find others who are different and outcast and help them. They are all choosing to move past fear, and that’s a good start.