In the Year of Nazi Captain America, A #DoodleforJack Would Remind Us What Jack Kirby Stood For 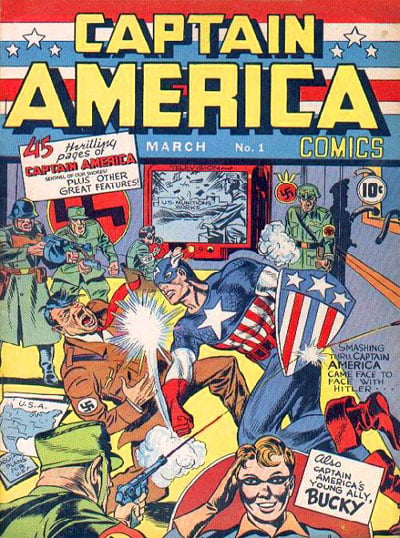 A new fan campaign is asking Google to honor Jack Kirby, the “King of Comics,” with a Google Doodle on what would have been his 100th birthday. Under the hashtag #doodleforJack, fans are calling on Google to remember the artist and writer who co-created Captain America, the Fantastic Four, the Hulk, Thor, Iron Man, Black Panther, the original X-Men, and more on August 28, 2017.

Here we go — let’s get Jack Kirby a Google Doodle for his centennial on August 28. Write in and spread the word! #doodleforJack pic.twitter.com/BZlc9u0lPi

While white men are certainly well-represented on Google Doodles already, this has been a particularly painful and memorable year for one of Kirby’s most famous creations. Captain America, co-created by Kirby and Joe Simon as a superhero child of immigrants who literally punches Nazis, was revealed in Marvel Comics’ Secret Empire event to be an agent of the Nazi-esque organization Hydra. Fan outrage was swift, loud, and 300% justifiable.

While Marvel has since hinted that Cap may eventually be “redeemed,” fans are unlikely to forget the fact that Marvel turned a character created by two Jewish men, during World War II, into a pretty-much-Nazi. In addition, while the nature of corporate comics necessitates an eventual redemption arc, it will be almost impossible for many readers to ever really get over this change to the character’s core. The Secret Empire reveal changes who Steve Rogers is, and what he represents, in a real way that will make it hard for fans who loved the original vision of the character – the one based on Kirby and Simon’s creation – to reconnect with this new, anti-hero(?) version. The symbolic power of the character has been fundamentally – pardon my French – fucked with.

Given what Marvel has done to Kirby’s intellectual property – from robbing him of royalties to betraying the spirit of one of his most beloved characters – I totally think it’s time to highlight this remarkable artist on August 28. May the Doodle inspire more anti-fascist art, and may the creators of that art be treated with the respect that Kirby was denied.

(Via CBR; image via Marvel Comics)