Those were the stories that stayed with you. 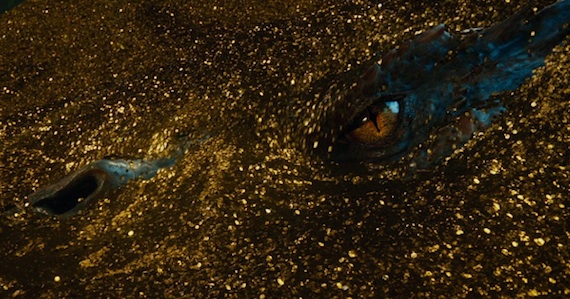 Ian McKellen isn’t ruling out the possibility of more films set in Middle-Earth, but you probably shouldn’t get your hopes up.

McKellen told the BBC that he’s not one to underestimate the power of Peter Jackson:

I was told by Peter, in 2001, that that was the end, that it was all over. Here we are 13 years later. So I don’t believe necessarily this is the end of the journey.

It’s a nice thought: there’s lots and lots of stories from Middle Earth that were barely touched upon during The Lord of the Rings and The Hobbit, and naturally a lot of sites out there are pointing straight to The Silmarillion. The posthumously published tome broadly covers the history of Middle-Earth from its creation myth to the end of The Lord of the Rings, a collection of heroes and histories recorded by Elves, where The Hobbit and The Lord of the Rings are the written history of Hobbits. There’s very minimal character overlap between The Silmarillion and its younger siblings. Sauron and Galadriel are minor players in a few of its chapters, with small appearances here and there from Círdan (who appears in but is never really talked about in the LotR movies) and eventually, at the very end, a few mentions of Elrond. I’d love to see several movies based on stories from The Silmarillion, which run the gamut from Norse mythological epics full of geas’es and ordained destinies and capital-D-Dooms, to a romantic epic with enough adventure for two The Princess Brides, to Greek tragedies of fatal hubris, incest, betrayal, and suicide. Heck, I’d settle for a short, wordless animated adaptation of The Ainulindalë with a lush soundtrack.

Unfortunately, there are two big things standing in the way of a movie adaptation: money, and law.

Getting Peter Jackson to work on another Middle-Earth film for New Line or Warner Bros. would likely run up against one of the major hurdles of getting him to direct the Hobbit films: the fact that New Line insists that they have never made a profit from the Lord of the Rings films and in fact sustained “horrendous losses.” This claim, on which they have been sued by the Tolkien estate, a host of actors from the LotR trilogy, and Peter Jackson himself, allows them to legally keep from paying a single jot of the royalty money (as based on a percentage of profits) promised in the contracts of LotR actors, Peter Jackson, and the Tolkien estate. This is a somewhat notorious Hollywood studio creative accounting practice, or at least notorious enough to merit its own Wikipedia entry, where you can find that films like Return of the Jedi, Coming to America, Spider-Man, and Harry Potter and the Order of the Phoenix are all financial failures according to the studios that produced them.

Is it possible for Jackson and New Line to put their differences aside (or, more likely, draw up a hotly negotiated contract) to make a new film trilogy? The evidence is out in theaters in two weeks. Could they do it again? It’s a hurdle, is what I’m saying.

But the bigger chasm to cover is the fact that New Line and Warner Bros. don’t own the film rights to any of Tolkien’s other books. Rights to The Hobbit and The Lord of the Rings were sold decades before the movies were actually made, at a time when the idea of full feature adaptations of the books in any medium, much less live action, seemed about as far away as the Lonely Mountain is from the Shire, and in a time when franchise film rights to a setting in addition to a specific book were as unthought of as the return of Sauron was to the earliest men of Numenor. Film rights to The Silmarillion have never been sold, and remain entirely within the power of the Tolkien estate, who have not looked favorably upon the Jackson adaptations.

Could it happen? Hey, three years ago I would have told you that a third Star Wars trilogy without the involvement of George Lucas was impossible. But it’s not just a matter of waiting until Peter Jackson, Warner Bros., or New Line gets the itch to make another film with dwarves and elves in it. Until then, I’ll be over here, dreaming of Hayao Miyazaki’s Ainulindalë.