While You’re Out Fighting Nazis, Don’t Forget Misogynists Like This Douche Still Exist 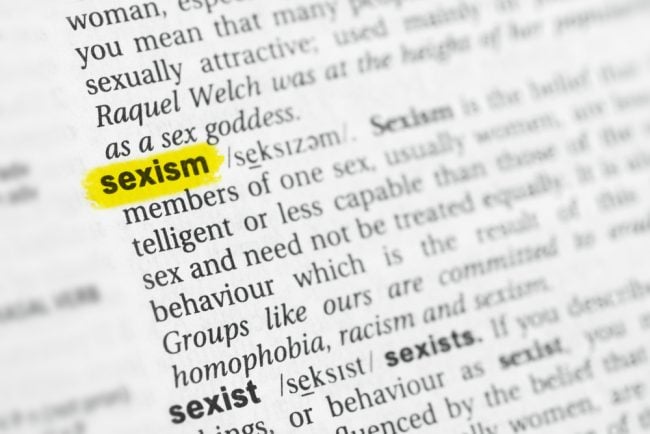 We had a lot of talk about Nazis yesterday, because apparently that’s a thing we need to be doing now in 2017. However, lest you think that white supremacy has taken over as the oppression du jour, let’s not forget that there’s still sexism and misogyny to contend with. Some forms of oppression never go out of style!

A recent, and particularly gross example comes out of the entertainment industry, which shouldn’t be surprising, as there’s a lot of sexism in the entertainment industry. As reported by The Hollywood Reporter, back in March around the time of the “A Day Without a Woman” strike, a Hollywood assistant and aspiring TV writer, Rosette Laursen, asked for an unpaid day off to participate in the strike. Her boss, talent manager Michael Einfeld, didn’t respond directly to her. Instead, he chose to vent about it in the most sexist and disgusting way possible to her two male co-workers.

Funny story, though. He accidentally copied her, too, so she got to experience the joy that is this email:

“Are you fucking kidding me. At the end of pilot season. Someone should sew her vagina shut. I’m never hiring a girl ever again.
No bonus for anyone that strikes or leaves early in pilot season. No one is striking in show business we are all against Trump. And women are considered diverse and being shoved in as writer and directors. Zach who is a Jewish male is being pushed out.
Uppity Selfish Cunt. Heather went to work. I’m sure anyone at a casting office or agency would be fired.”

Are you fucking kidding me?

When Einfeld realized his mistake, he tried to offer an “apology.” “Apology” is in quotes for reasons. He wrote:

“I apologize for venting like a misogynistic faggot. I was letting off steam I didn’t mean to hit reply all. I’m an asshole. If you come back we can play Nazi death camp. You can beat me and put me in the oven. Or feed me cabbage and lock me in the shower. I am truly sorry.”

You know what’s my absolute favorite thing? When people don’t apologize for what they do so much as they apologize for getting caught. What makes this particularly frustrating is that Einfeld is both Jewish and gay. You’d think he’d maybe kinda sorta understand things like oppression and maybe how to treat people in other marginalized groups.

But that’s the thing right there. He says right in his email that he doesn’t really believe women are a marginalized group. He says they’re “considered” diverse, as if the whole thing is made up and they’re being “shoved in” to jobs they don’t deserve, rather than considering the hiring of more women an attempt to correct an imbalance.

Laursen posted about the entire ordeal on her Facebook page, where she details how she quit, as well as the legal action she tried to take against Einfeld afterwards. She also talks about the fact that, despite his sometimes being a nice guy, for the most part behavior like this was not new. This was just the last straw for her.

Getting back to inadequate apologies, THR printed the contents of a public “apology” that Einfeld posted on his Facebook page (only after Laursen made the ordeal public, of course) that was made private the following morning. It read:

“Let me say without reservation — I am sorry. I used language that was tasteless, humorless and completely inexcusable. I believe deeply in workplace diversity regardless of race, gender, creed or sexual orientation, and I am mortified that the things I have said have worked against my commitment to inclusion. As I’ve searched for a response to all this, what I’ve discovered is that words fall woefully short of my extreme remorse — I am so sorry. I will be undertaking some obviously needed introspection, and want to thank those of you who have expressed a willingness to stand by me. To those that feel they need space from me — I am heartbroken but understand.”

He’s not sorry. He’s sorry he’s been found out.

And no, being a gay man doesn’t make it okay to give a female assistant lingerie as a workplace gift, even as a “gag gift.” And no, having experienced oppression of your own does not give one license to dish it out elsewhere.

But this is how deep sexism goes. Men who are marginalized because of their race/ethnicity, class, sexuality, physical/mental ability, or even their gender expression always have women to look down upon and treat like garbage.  That’s male privilege at work.

Let’s look at the last two lines of his most recent apology again: “I will be undertaking some obviously needed introspection, and want to thank those of you who have expressed a willingness to stand by me. To those that feel they need space from me — I am heartbroken but understand.”

So, he’s apologizing to save his business. Understandable for him, I guess. However, there are apparently already industry-types willing to stand by him. Just as they continually stand by the men in Hollywood who abuse female colleagues or other women in their lives in various ways.

Just as there are people who stand by and continue to work with Woody Allen, Bill Cosby, Casey Affleck, Chris Brown, Johnny Depp, Roman Polanski, Terry Richardson, Charlie Sheen, etc, etc, etc. Women instantly go to “director jail” after one bad film. Men in the industry can literally abuse the women they’re working with and at the very least continue to work, and at most win accolades for that work.

Sexism is a complicated, insidious thing that seeps into all of our lives, and finds its way out of our mouths no matter who we are. Fighting it is difficult and must be approached from many angles. However, at the very least we can be more vigilant about and harsh toward obvious perpetrators of violence and harassment against women. Just as denouncing Nazis should be an obvious thing to do, so should denouncing misogynist abusers of women.