Is This WhoIs Knock-Off Really Run By Kanye West? 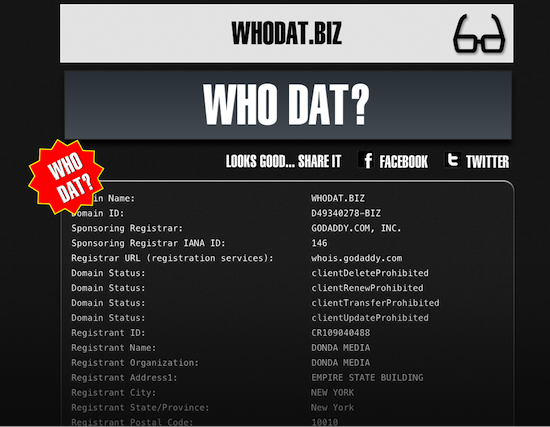 You guys remember DONDA, right? The mutlimedia-everything company founded in a truly spectacular series of Tweets from Kanye West, which is supposed to fix everything from architecture to childhood education? It’s gonna be great, I’m sure. However, a website called WhoDat.biz has emerged claiming to be the first incarnation of the legendary DONDA. You might assume that it is, perhaps, a breakthrough initiative the likes of which the Internet has never seen. You probably wouldn’t assume it’s a WhoIs rip-off that lets you look up the owners of websites. Which is what it is, and it’s probably fake.

On the WhoDat.biz site, visitors are greeted to a wall of all-caps text. At the very least, this imitates the tweeting style of everyone’s favorite directionally-named auteur. Here’s what it has to say for itself:

EVER WONDER WHAT IT WOULD BE LIKE TO BE ABLE TO FIND OUT WHO’S BEHIND YOUR FAVORITE WEBSITES? WHODAT DOES JUST THAT. SIMPLY ENTER THE WEB ADDRESS OF A WEBSITE IN THE BIG-BAR-BELOW AND DISCOVER THE CREW BEHIND ANY WEBSITE ON EARTH. DONDA MEDIA IS PLEASED TO OFFER THIS SERVICE TO YOU FOR FREE, PLEASE STAY UP-TO-DATE WITH THE MANY GREAT NEW INNOVATIONS FROM DONDA MEDIA ON TWITTER ON FACEBOOK OR ON OUR WEBSITE. EMAIL US – [email protected]

Now, the name of the site — and the prose style — seem to be where the similarities to Kanye West’s DONDA end. In the text above, the link to “our website” goes to a Tumblr account. No matter how plugged in to the hip kids you are, I can’t imagine not having a standard website to launch your web presence. Perhaps most damning is the fact that said Tumblr has 37 posts and was created this month.

Also, while it’s true that when Kanye launched DONDA, he did invite people to contact him via a gmail address, it’s not the same one listed in the text. Originally, West pointed the world toward “[email protected],” not “[email protected]”

Lastly, it’s a .biz; if we accept that — as the WhoDat lookup indicates — DONDA is being run from an office in the Empire State Building, why would Kanye settle for a .biz address? .biz is a joke, and everyone knows it.

Julia Rubin, managing editor of our sister-site Styleite and resident expert on Kanye West, was the first in our office to voice a concern that this site is fake. Looking it over, I am inclined to believe her. Our discussion did raise an interesting question: Why would someone create this site? My thinking is that it’s a jab at West’s bombastic style and his grandiose claims. WhoIs lookups are, of course, notoriously unreliable as a means of investigation; they promise a lot but they often don’t deliver. Pretending that a domain search is from the mysterious DONDA is a genius stroke as it’s just weird enough to seem plausible and just useless enough to be satirical.

Someone out there is laughing.