Donald Trump Has a Dangerously Misguided View of Autism 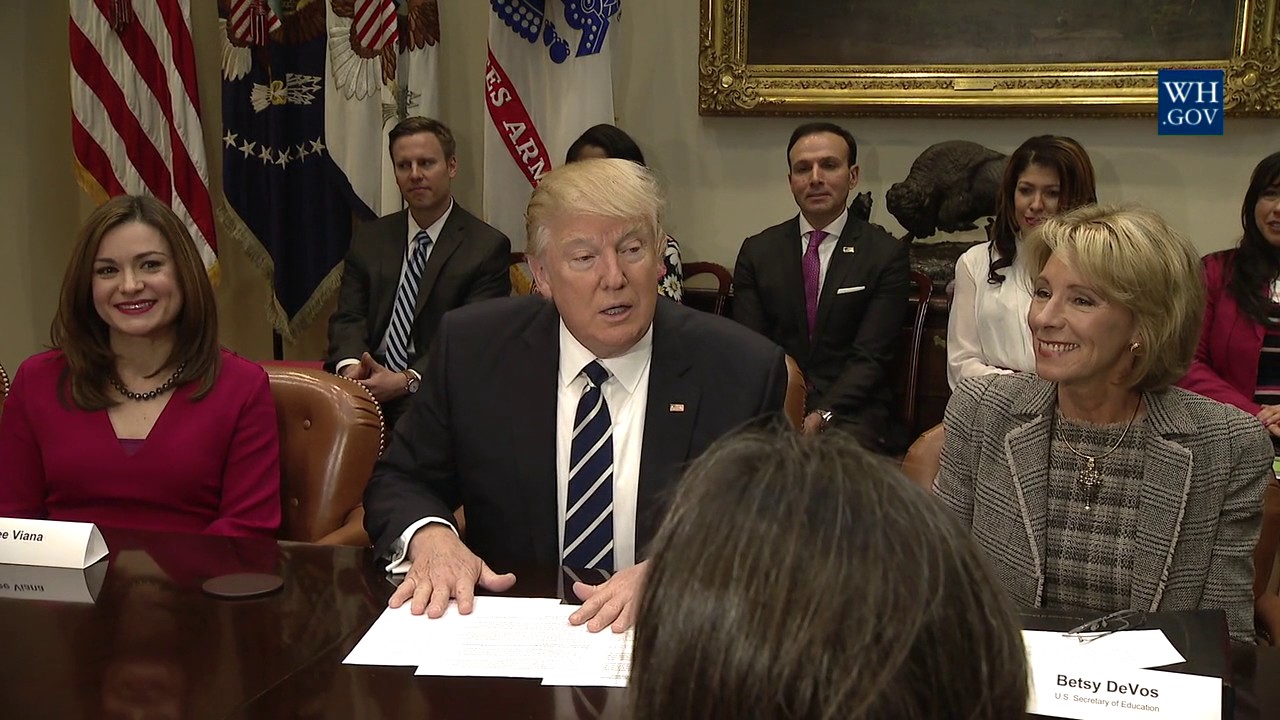 It shouldn’t come as a surprise anymore when Donald Trump makes statements amounting to little to nothing more than parroting back verbal clickbait sensationalism. This is a man who spent his campaign answering actual policy question with myriad versions of “Don’t worry about it, I’m, like, really smart, I’ll figure this stuff out,” and who literally just tweets Fox News headlines. And yet here I am, continuously finding myself surprised. I suppose that’s on me.

Today, Trump’s dangerously, willfully misinformed information comes in the form of a discussion about autism rates. During a “Parent-Teacher Conference Listening Session” with education obstacle Betsy DeVos and a roundtable of educators, Trump stopped the introductions to focus on the principal of a special needs school serving students with autism and physical and medically fragile–oh wait we can’t hear the rest because Trump hears a talking point calling his name and can’t even let her finish.

The interaction starts at the 6:10 mark:

Trump interrupts the principal to ask the super incisive question, “How’s that going?” After a pause (how do you even answer that vague of a question?), she responds, “Well.” Trump pushes to ask if she’s seen “a big increase in the autism with the children.” She says she has, to the point that the school has shifted its population with more of a focus on students with autism.

Trump responds, again, with the vaguest of follow-ups, “So what’s going on with autism?” He continued with his usual rancid word salad.

“When you look at the tremendous increase, it’s really–it’s such an incredible–it’s really a horrible thing to watch, the tremendous amount of increase. Do you have any idea? And you’re seeing it in the school?”

The principal responds then with the statistic that 1-in-66 or 1-in-68 children are diagnosed with autism, and Trump speculates that “Well, now, it’s gotta be even lower than that, which is just amazing – well, maybe we can do something.” (A lower statistic in this case would mean a higher number of autistic students.)

The problem here is that this principal was talking about the number of children diagnosed with autism (which, by the way, has remained fairly steady over recent years), while Trump and others who can’t be bothered with science and facts and nuance and all those annoying little details of the world, equate that with children who have autism.

And these, it shouldn’t need to be said, are not the same thing.

The spectrum of autism is still something doctors and researchers are working to understand. The number of cases that have gone diagnosed in previous generations (and still today) is unknowable. But when a principal is saying her school has such a high number of autistic students that their whole population has shifted, one response to that information is to be grateful that people like her are (presumably) working to understand those students and give them a great education.

The other response, the one people like Trump give, is to assume there’s a plague running rampant our society and deem it “horrible to watch.” And that is incredibly insulting to people with autism and those who advocate for their rights and respect.

This, again, shouldn’t come as a surprise. Pre-presidency, Trump tweeted a lot about the nonexistent link between vaccines and autism.

I’m not against vaccinations for your children, I’m against them in 1 massive dose.Spread them out over a period of time & autism will drop!

“@OnlineOnTheAir: My friend’s son, immediate #autism after #vaccines 10 yrs ago. So sad. Keep up good work Nay-sayers will understand soon.”

With autism being way up, what do we have to lose by having doctors give small dose vaccines vs. big pump doses into those tiny bodies?

Healthy young child goes to doctor, gets pumped with massive shot of many vaccines, doesn’t feel good and changes – AUTISM. Many such cases!

And now, terrifyingly, Trump is looking like he might be in a position to make good on some totally baseless promises he made back in 2014.

If I were President I would push for proper vaccinations but would not allow one time massive shots that a small child cannot take – AUTISM.

Trump is now, just as he was then, latching onto fear-baiting non-science. As autism expert and author Steve Silberman told the website Science of Us,

There’s no consensus as to whether or not there’s been any significant increase in the actual prevalence of autism, period. The real debate is whether or not there has been a small increase, and there are a number of factors that could play a role in that small increase… But the consensus is that there has been no huge, startling, ‘horrible,’ as Trump said, increase in autism. And the CDC estimate has been flat for a couple of years, just as they expected it to be, because the major source of the increase that started in the 1990s was broadened diagnostic criteria and much more public awareness of what autism looks like.

For Trump to be spewing rumors rather than facts and science, he’s in a position to cause real damage to both the perception of people with autism, and the potential progress we’re able to make in diagnosis and care over the next however may years we have left with him in office.

As Silberman put it, just as Trump does in so many areas, he “is listening to the wrong people and trusting the wrong people.” And that can only work against people like this principal, and anyone else trying to make actual progress.