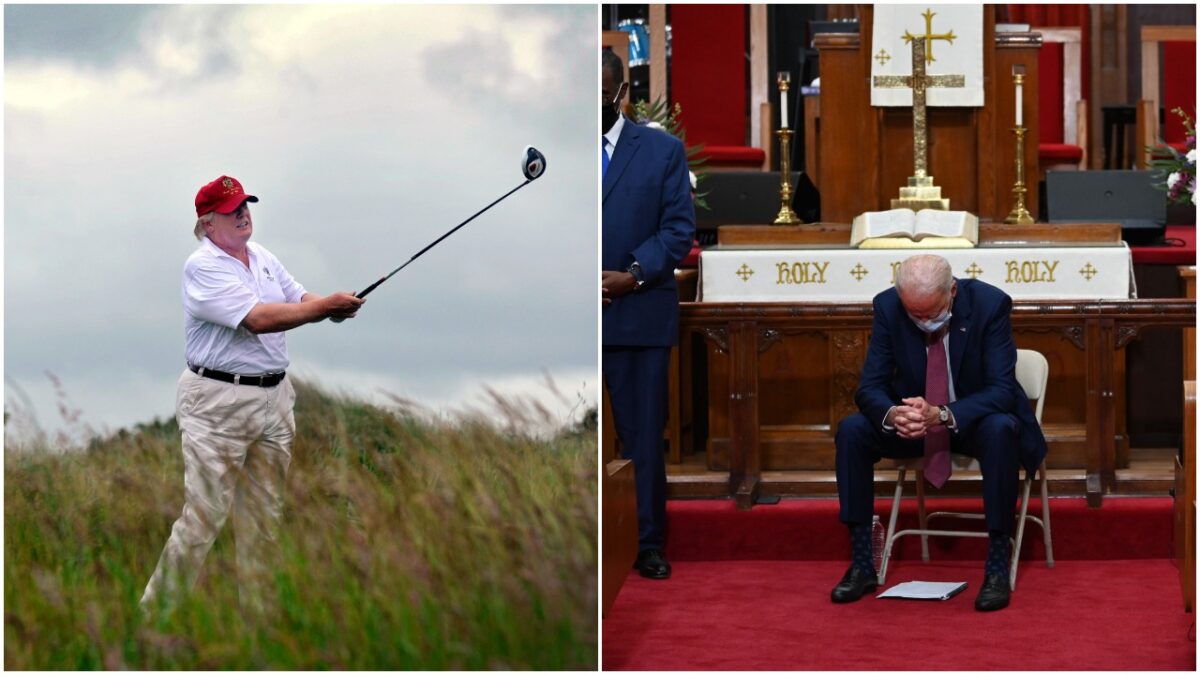 The photo above of Donald Trump is from 2012. We don’t have photos of Donald Trump yesterday or from the day before because he spent the most tumultuous weekend hiding, quite literally, from the unrest and protests that are rocking the country. Meanwhile, his presumptive Democratic opponent spent Sunday meeting with Black leaders in Deleware and listening. The contrast between these men has never been more stark.

Frankly, no one was expecting Trump to do anything to quell the unrest, The only concrete action he could truly take to help the nation would be to resign. But he could have at least pretended to care about the concerns of Black Americans instead of inflaming everything with incoherent tweets and cowardice, and now reports that he’s told governors to come down even harder on the protesters. These protests are the direct result of the racism, fascism, and hate that Donald Trump represents. They are a reflection of the character of Trump, who is himself a distillation of the worst of America.

Trump spending the weekend hiding in a bunker and tweeting “LAW AND ORDER” in a massive contrast to Joe Biden, who spent a day listening to Black leaders in his hometown about how to be better. He also visited protest sites, his staff donated to bail funds, and he did all of this while safely wearing a mask. And when Biden and staff did the right things, Trump had nothing but derision.

We are a nation in pain right now, but we must not allow this pain to destroy us.

As President, I will help lead this conversation — and more importantly, I will listen, just as I did today visiting the site of last night’s protests in Wilmington. pic.twitter.com/0h2ApbKT0C

Sleepy Joe Biden’s people are so Radical Left that they are working to get the Anarchists out of jail, and probably more. Joe doesn’t know anything about it, he is clueless, but they will be the real power, not Joe. They will be calling the shots! Big tax increases for all, Plus!

The contrast continued today as Trump spent a phone call with governors telling them they needed to be more aggressive and militarized. Regarding protestors, Trump told governors: “You have to dominate or you’ll look like a bunch of jerks, you have to arrest and try people.” Trump spent his morning blaming the “radical left” and getting angry when he could have been doing literally anything else as President in a country aflame with injustice.

At the same time, Joe Biden announced that in the first 100 days of his presidency, he will create a police oversight board and pledged to work to improve things. He hosted a virtual roundtable with mayors of major cities on these issues. Biden has acted more presidential in the last two days than Trump has in his entire life, and the difference is staggering.

This is not to say that Joe Biden is a perfect candidate by any means, but when looking at the choice between a man who is inciting racist violence and empowering white supremacy, and the man who is taking steps to listen to Black leaders, learn and speak out against racism, the contrast could not be starker.

There’s a clear choice here, and while Joe Biden might not be the candidate everyone wanted, he’s the only one in the field that is expressing any care or regard for Black Americans. The contrast is right there for everyone to see.